I have lost the reference, but I read somewhere that when the French explorer Sir Duluth heard rumors of an underground lake beneath Lake Superior, he quipped in his native tongue, “Lac d’Enfer” (literally: “Lake of Hell”). This nomenclature was mistranslated by English-speakers, becoming anglicized as “Lake Inferior” — an insidious malapropism that replaced the original meaning.

Copper-helmet diver William Bitter found an entrance to Lake Inferior. He was working by the breakwater wall for the city of Duluth, offshore of what is now the Lakewalk. A large storm had damaged the wall, and he was conducting an underwater survey at the end of a 20-foot lifeline.

Working the winch and the air pump, his support team on the wall heard Bitter cry out through the speaking tube, then noticed a whirlpool opening up. They winched Bitter out as loose boulders and timbers were sucked into it. 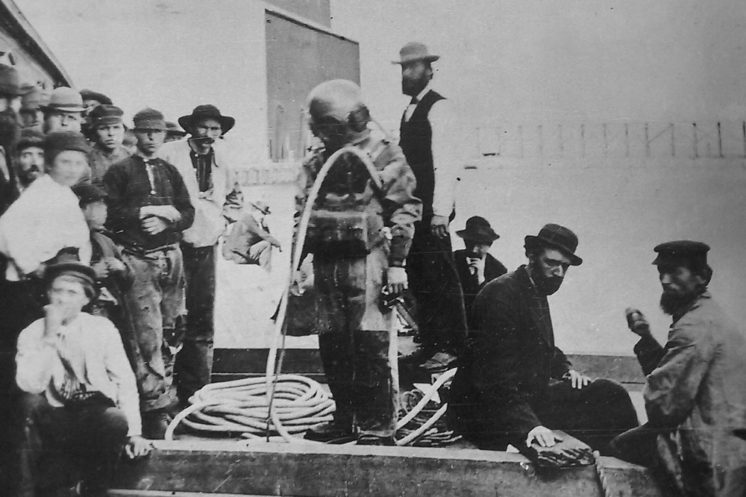 They reeled him back down, and he found himself in a vast cavern. Water spilled torrentially around him; he was in the middle of a waterfall dropping through empty space. The farther he descended, the more the water became diffused into a mist. He was lowered 600 feet — to the end of his lifeline — yet still found himself dangling in open air. He signaled through the speaking tube to ascend.

He reported his find to city officials, who allowed him to keep exploring while preparations were made to cap the hole. The city was worried the hole would widen and damage the shipping industry. Bitter had 48 hours.

Bitter’s lifeline was tripled from 600 feet to 1800 feet. Lowered again through the hole, he descended 1500 feet through the air. His legs grew numb from dangling with his weighted diving shoes on. Finally he reached a body of water. The vast cave contained a lake of unknown size, stretching off into the permanent night for what seemed like infinity.

This was Bitter’s third and final descent before the hole was to be capped. The tripled length of his lifeline made communication increasingly difficult through the speaking tube. But he braved it anyway, and failed to return. All his team got back was nearly the full length of the lifeline, which had been severed.

There was speculation it had snagged between the sharp edges of a quartz extrusion. But no one except Bitter knew what conditions had been encountered. The last words heard through the speaking tube were faint and indecipherable; everyone heard what they wanted to. Some said Bitter had succumbed to the mental strain of the extreme conditions, and had cut the line himself with his dive knife.

The city capped the underwater entrance with wooden cribbing weighted with boulders, and forgot about it. It is still there to this day, but its exact location has been lost. This monument to the forgotten explorer William Bitter lies buried by the shifting sands of time and the sea floor.

“Glad to have a moment to write amidst all our preparations. An intoxicating spirit of adventure has united this team ever since the cave system was discovered under the NorShor Theater. As we determined this past week with several arduous dives, the caves lead to a vast underground lake. This is undoubtedly Sir Duluth’s ‘Lac d’Enfer,’ and the same lake which swallowed poor William Bitter in 1870. Bitter had punched through from above; our cave system represents a side entrance. We are stunned to have verified what we all considered legends.

“An initial taxonomy of Lake Inferior includes eyeless cavefish with a pearlescent lustre, a species of white crayfish, large pale waterbugs, and some colorless worms. The complete lack of pigmentation indicates Lake Inferior must be millions of years old.

“We are diving the freezing waters again today, but this time with McPurdy’s specialized air mixes calibrated for the extreme deep. We are determined to get consistent depth readings which proved elusive yesterday. Most readings fell in the 500-foot range which was deeper than anyone expected. But the data show an odd shifting of the numbers at the sea floor, possibly a dramatic thermocline. We will find out tomorrow.

“Dive plan: From the basement of the NorShor Theater, Dr. McPurdy, Dr. Oswald, and myself will spelunk 1500 feet down through the cave system below Duluth, following the lines we installed. We will haul our scuba gear for use in the submerged tunnels at the nadir. We will each have three air tanks. Then we will suit up and follow our dive lines through the flooded crevasses, lava tubes, and the great vertical crack like a drowned cathedral. Finally we will arrive at the chamber of rose quartz opening 100 feet below the surface of Lake Inferior. Exiting the chamber, we will descend the remaining 400 feet to the bottom of this secret sea.”

“McPurdy, Oswald, and I exited the chamber into the lake, our helmet lights blazing. The water was clear as gin. A school of spectral cavefish, some as big as salmon, flowed around us like a river. The fauna here are eyeless but they detect light through the pineal gland, and shun it.

“We descended down the wall of basaltic rock. Milky veins of silicate were visible through a translucent layer of cave slime. Along this great wall’s ledges and sheer surfaces, white worms (possibly legless salamanders) and white crayfish retreated from our light beams.

“We descended into the technical-diving zone below 180 feet deep, which we all trained for. A malfunctioning rebreather will get you CO2 instead of O2 until you come off the loop and drown with blue lips. Our buoyancy inverted and we fell faster and faster, lured deeper. Even with McPurdy’s air mix, we were narced with nitrogen narcosis, oxygen toxicity, and vertigo from staring into the great depths.

“Fixating on inner space like reverse astronauts, we got to 500 feet deep and never found the bottom. Our depth finders were useless. We experienced an increasingly strong downward current, almost a whirlpool effect. The suction tugged at our legs and it became harder to control our buoyancy. It’s possible Lake Inferior drains into yet another underground lake beneath it. It’s lakes all the way down.

“We were all suffering from the rapture of the deep when McPurdy panicked and went into convulsions. Our strenuous efforts to control him burned a lot of oxygen, and his violence threatened to damage our rebreathers. We had no choice but to let the lake take him. As he was pulled into the black current, we watched his helmet lights slowly spiral down. His inchoate screaming and ranting got fainter on the com. His lights shrank to pinpoints, then disappeared altogether. Where was the bottom? It’s inconceivable there’s no bottom.

“Oswald and I took several hours of decompression stops to ascend back to the crystal cavern. We were each on our third tanks, and air was dangerously low. We began threading through the submerged passages. Oswald got stuck squeezing through a restriction beneath millions of tons of rock. We had each traversed this tight space before, but this time he got wedged, and soon he yielded to the terrors of claustrophobia. I tried freeing him, but silt got kicked up, and visibility went to zero percent. We were both panicking now. I lost my sense of direction, even lost my up and down. I could traverse the wrong passage and never emerge. Somehow, I found the dive line we’d snaked through the tunnels like Daedalus’ thread, and pulled myself from the silt cloud. Oswald cried out, cursing me, but there was nothing I could do. One of us had to make it out.

“I swam through the great vertical crack, a high-ceilinged vault of smooth stone. I glanced back and saw a figure following me. It trailed silt in its slipstream like the tail of a comet. I assumed it was Oswald and that he had freed himself. His lights were out. I went to him.

“But it wasn’t Oswald. It was the 150-year-old corpse of William Bitter, still clutching his dive knife. My passage through the tunnels had stirred up the currents and brought the perfectly-preserved Bitter along behind me in his continued exploration of the land of the dead. His antique diving suit lacked its weight shoes and weight belt. Bitter must have cut through the rubberized canvas straps in a desperate attempt to ascend after his line had been severed. Freezing water would have rushed into his helmet; his lifeline became a deathline. Trying to save himself was an act of madness.

“Perhaps he’d been exploring the caves when it happened. Or perhaps he had died in Lake Inferior’s open water, and had washed in through passages yet undiscovered. He was free-floating through the cave system, arms outstretched in the permanent rigor mortis of the anaerobic frozen dead. I saw his face through his helmet’s tiny portholes. His skin was as white as the cavefish; in the cold, the fats of his epidermis had hardened into corpse wax. My bright lights illuminated the interior of his copper helmet, stimulating eyeless white crayfish living in his mouth to pour out and exit through the length of umbilical tube trailing behind him.

“My mind became a flooded cathedral of its own. Hyperventilating, I swam away as fast as I could, but he only followed, pulled along by my wake. I’m not sure how I got away from him, or if I really did. I carry him with me in the Lake Inferior of my skull. I am told I surfaced with only six breaths left in my tanks.

“Do not attempt to recover the bodies. Seal the entrance, collapse the caves, nuke them if you have to. Forget this ever happened. I’m going to try forgetting for the rest of my life, at the bottom of a bottle of gin, my own private Hell Lake cold as the Devil.”

[All my essays here]

https://www.youtube.com/watch?v=AQDVcNA1OL0 Thursday's Homegrown Music Festival content is three and a half hours of livestreamed music from 2104.