Lake Superior Wants to Kill You

Pardon the alarmist headline. Lake Superior doesn’t really want to kill you, but you should know all bodies of water are oblivious to your tiny existence and will absolutely steal you away any time you make the slightest error in judgement. So I’m not apprehensive about issuing stern warnings as if I’m your mom.

I know how seductive that big lake can be. And I know how much fun it is to dive off various bridges, rocks, swinging ropes or whatever it is you can propel yourself from into whichever refreshing river or stream awaits. I’ve done it, and I’ve lived through it. I’ve also seen it go wrong over and over and over again.

I’ll be the first to say when it goes right it’s a thing of beauty. You can’t let danger keep you off the water; we all know water absolutely gives so much more life than it takes. Just sitting on the shore looking at it, whether it’s perfectly calm or violently raging, is the easiest way to put yourself into your place on this planet. But it’s natural to want more than that. You have to at least put your toes in. And that sets you on the path to all manner of thrill seeking. Your ability to pick which point along the way to show some self control will determine whether you have the maximum good time or utterly wreck yourself.

It’s your life and you have to risk it all the time, even for seemingly stupid things, so don’t get me wrong. I know cliff diving is a great art and I won’t stand in the way of it — I’ll stand in awe of it. I know big waves are what surfing is all about. The bigger the better. I know that backflip you’re planning to do off the side of the boat will be a thing of beauty — unless it isn’t.

I’ve seen the glory and I’ve also seen the loading of the ambulance and publishing of the obituary. Every day is a gamble, kids, but I want you to make smart bets.

I wish I didn’t have so many examples of imbecilic ways I’ve challenged Lake Superior and its tributaries. I wish I hadn’t watched others make bigger mistakes. I know it’s hypocritical to say I cherish all the great moments on the water and would take back only the tragic. But that’s not what I’m saying. I’m saying I would take back the stupid.

Here is the clearest example:

On Nov. 2, 1992 a friend and I went down to the pier at Canal Park during a storm. The gate was closed and locked because waves were rolling and splashing over the walls. But it looked more fun than dangerous to go out there, so we climbed the gate and stomped around on the slightly flooded pier.

It really was fun, at first. Water would explode over the wall, there would be a few inches of lake at our feet, it would quickly drain out, and off we’d go shouting and splashing. I even have a picture of myself. I’m glad it’s not the last photo ever taken of me. Those of you with even half of a functioning brain know where this story is going. Eventually a bigger wave came. It knocked me down and threw me against the pier wall, which is maybe four feet tall. A slightly larger wave could have easily carried me over into the shipping canal. And that would have almost certainly been the end of me.

I’ll tell you what should have been at the top of my mind in that moment, but wasn’t: the Halverson brothers. In 1967 they did the same thing at the pier. All three of them perished, along with one of the Coast Guardsmen who went looking for them. It happened before I was born, but I’d heard the story. It wasn’t fresh in my mind that night in 1992, though. Somehow I climbed the very gate that was installed because of those four deaths and had no awareness of what had happened there 25 years earlier.

It can’t be said I wasn’t warned, but could I have been better warned? We can’t idiot-proof the world, that’s for sure, but it’s worth asking what we can do, because we both know a lot of people who are even stupider than I am. And it’s not always stupidity at play. Sometimes it’s ignorance and sometimes the water just creeps up and takes you.

There is presently a pretty good system in place for warning people about rip currents on Park Point. That wasn’t the case when Matthew Rheaume drowned in 2003. But it was the case in 2017 when Ryan Fuglie and his daughter Lily met the same fate. No warning system can be even close to perfect. We’ll never know how many lives the red flags have saved.

I was on a different part of the beach the day of the 2003 drowning. I felt that rip current. It was a clear and ominous danger. I got out of the water quickly. Others did not. Several people needed to be rescued. Some people were fine out there and thought the current was no problem at all.

I was with Scott Lunt that day. He was fine. He really seemed to enjoy his swim. The current didn’t bother him in the slightest. He’s a good swimmer. But if you think the difference between a life-threatening situation and something fun boils down to physical fitness, keep in mind that Junior Lessard needed to be rescued on that day in 2003, and less than a year later he won the Hobey Baker Award as the best college hockey player in the nation. We can’t really accuse him of being out of shape or panicky under pressure. An Olympic swimmer could drown on Lake Superior under a variety of circumstances. And a dimwitted clutz could miraculously swim ashore in the worst conditions. So, again, you should make smart bets.

Here’s what else was going on while Scott Lunt was enjoying his swim: I was standing on the beach looking out at the waves trying to find him. He was invisible out there. I kept wondering if he was in trouble. I kept thinking I should swim out and look for him. Maybe if I did swim out I wouldn’t have made it back. That certainly ran through my mind at the time, along with the notion that if I didn’t swim out there I might live to regret that the rest of my days. It turns out I did the right thing, but it could have easily been the wrong thing.

I have more examples, and some are worse. I don’t want to relive them any more than I already have to in this simple paragraph acknowledging they exist.

The close calls happen far more often than the deaths, and they tend to fade in and out of memory no matter how intense those moments seemed in the thick of it. Once everyone is safe we can laugh about it, right? Not because it’s funny but because we have to for our sanity.

Last summer I was at Lynn Canyon Park in Vancouver. A woman from the neighborhood nearby got off the bus with me and made a point to mention there had been a death a week earlier. At the canyon there is a rather grim sign. It shows all the fatalities and injuries at various places along the waterway in recent years. 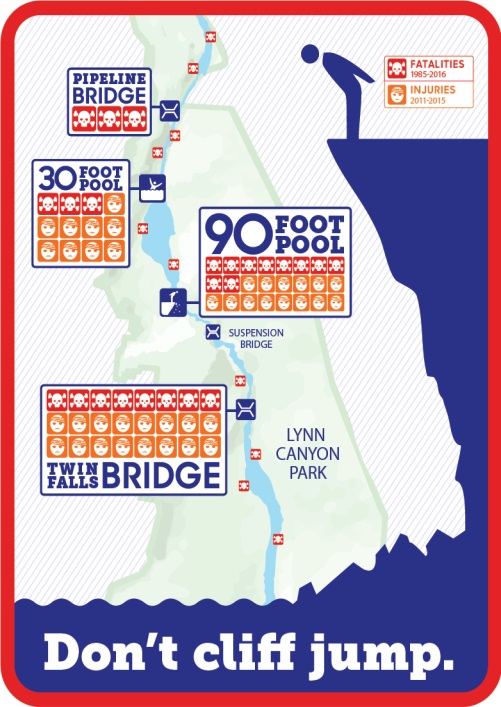 If you want people to make the most intelligent bets they are capable of, a sign like that might be the best option. It’s certainly a little morbid, but full disclosure might help a young person make a better decision — particularly someone who doesn’t keep track of what happened in somewhat recent Duluth history at the Deeps, Uncle Harvey’s Mausoleum and so on.

I’m sure there was a sign on the pier gate in 1992. It probably read: “Pier closed. Dangerous conditions.” Something like that. And I must have thought: “Dangerous for who? Certainly not an indestructible 19 year old.” Well, when that wave comes and grabs you by your guts and soul you learn instantly how feeble you are compared to a glob of simple molecules in which the hydrogen atoms double the oxygen.

I would have certainly thought twice if the sign read: “Remember what your mom told you over and over again about the Halverson boys.”

We developed a list of contenders for the Perfect Iron Range-area Restaurant poll by using a carefully crafted methodology —...