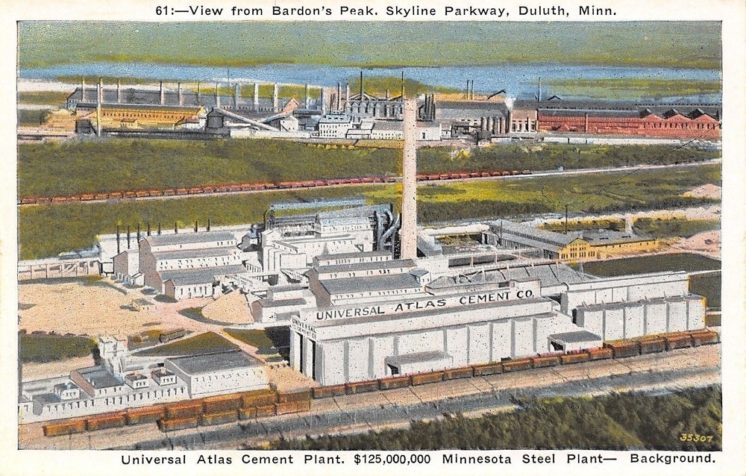 The postcard above was published by Arrowhead Trading Post of Duluth. It depicts part of the U.S. Steel Duluth Works campus, with Universal Atlas Cement Company in the foreground.

The cement plant was built in 1916 to operate in conjunction with the steel plant, converting granulated slag from the steel manufacturing process into cement. It was originally named Universal Portland, and became Universal Atlas after a merger in 1930.

The plant closed in 1976 and was demolished in 1978. Ikonics Corporation has occupied the 11-acre southwest portion of the 60-acre site since 2008. The second postcard was published by H. C. Wick Company of Duluth, with “genuine natural color” made by Dexter Press of West Nyack, N.Y. The Ektachrome photograph is by Rod Peterson. The third postcard was published by Zenith Interstate News Company of Duluth with Plastichrome by Colourpicture Publishers of Boston, Mass.

Industrial View of Duluth, Minnesota
Universal Atlas Cement Co. with American Steel and Wire Company plant in background. Duluth is an important manufacturing and distribution center for the upper midwest.

And as a bonus image, below is a pre-1930 photograph of the plant shot by Louis P. Gallagher. We were curious what was lighting up our radar screen this morning, turns out a lot of seagulls or lake...