Thirsty Pagan Brewing entered its 14th year of business on May 1. There was no fanfare, simply because owner Steve Knauss was so busy he forgot. Knauss and his staff have been working around the clock to ready the brewpub’s new spot at 1615 Winter St. for opening.

Final inspections and finishing touches were wrapping up Monday at Thirsty Pagan’s new location in the historic Soo Line Depot in Superior. A soft opening is set to happen this week and an official grand opening date is planned for June 8.

Remodeling of the 110-year-old building started in January. Renovations included a new kitchen and HVAC system as well as electrical work. The brewpub’s original location at 1623 Broadway St. in Superior has been closed since May 13 to enable the move.

The former Thirsty Pagan location took the Broadway Street space over from Twin Ports Brewing in 2006. Since then, the establishment has become a mainstay, drawing tourists and locals alike to sample craft beer, gourmet pizza and live music.

Knauss said his goal was to own the building where he operated his business within 10 years. He asked to purchase the Broadway Street location a couple of times but was turned down by the owner, so he decided to look for a building to purchase.

He found the old Soo Line Station, originally built as a passenger depot in 1908, attractive for several reasons: it’s an iconic building in Superior that has better visibility and parking than the previous location. Knauss expects to serve about 20 percent more customers due to these advantages. 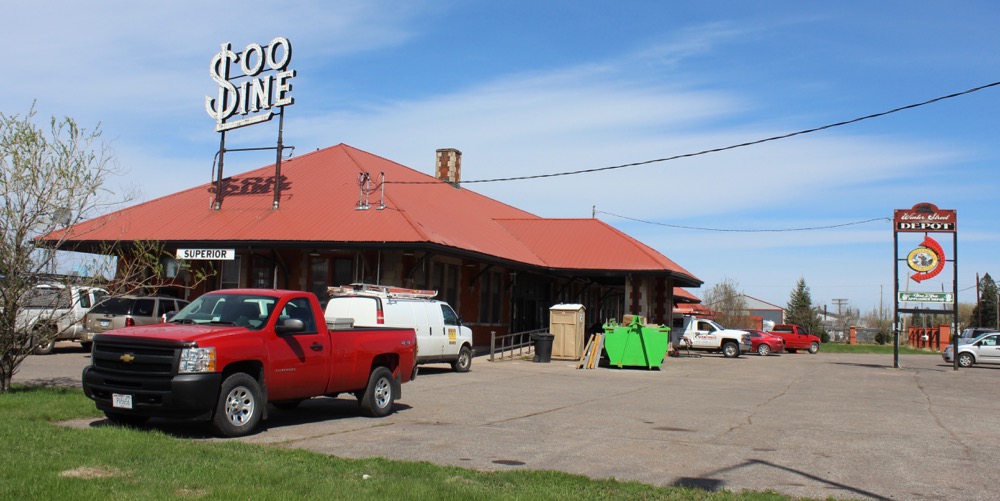 The craftsman-style building doesn’t have additional seating but patrons can expect improved seating. They’ll be able to see and hear the bands better, according to Knauss. Four private rooms are available for event rentals.

The floor plan and expansive ceilings make the new Thirsty Pagan feel spacious, as do the ample windows and natural light. As an added bonus, “It’s one of few places where you have food, beer and restrooms all in the same location,” said Knauss, noting the taproom trend that puts the onus on patrons to order take out.

Regulars will notice some familiar aspects from the old brewpub. The original bar was relocated. The bar was literally rolled over to the new spot, which is only a block away from the old location. The beloved Miller High Life mural that depicts a woman sitting on a crescent moon was also preserved and moved.

Brewer Kathleen Culhane is taking advantage of the move to improve brewing operations and efficiency. The new brewery has room for three more fermenters, which almost doubles its potential capacity, as well as more serving tanks. There will be 16 taplines. Culhane started at the Thirsty Pagan in June 2018. The previous head brewer, Allyson Rolph, left to take a job at Earth Rider Brewery.

Rolph had established an esteemed sour program at the Pagan, and Culhane hopes to continue the tradition. “Now that the house beers are solid and stable, I’m looking forward to getting a chance to experiment,” she said, noting that she’s looking to hire an assistant brewer.

Knauss said the feedback from the community so far has been overwhelmingly positive. “Everybody I’ve talked to in the past two months is excited — especially people in Superior — to see this old building revitalized,” he said. “We’re hoping to exceed expectations.”

The owner of a well-known Duluth restaurant and several other Canal Park properties has purchased a historic building in a...