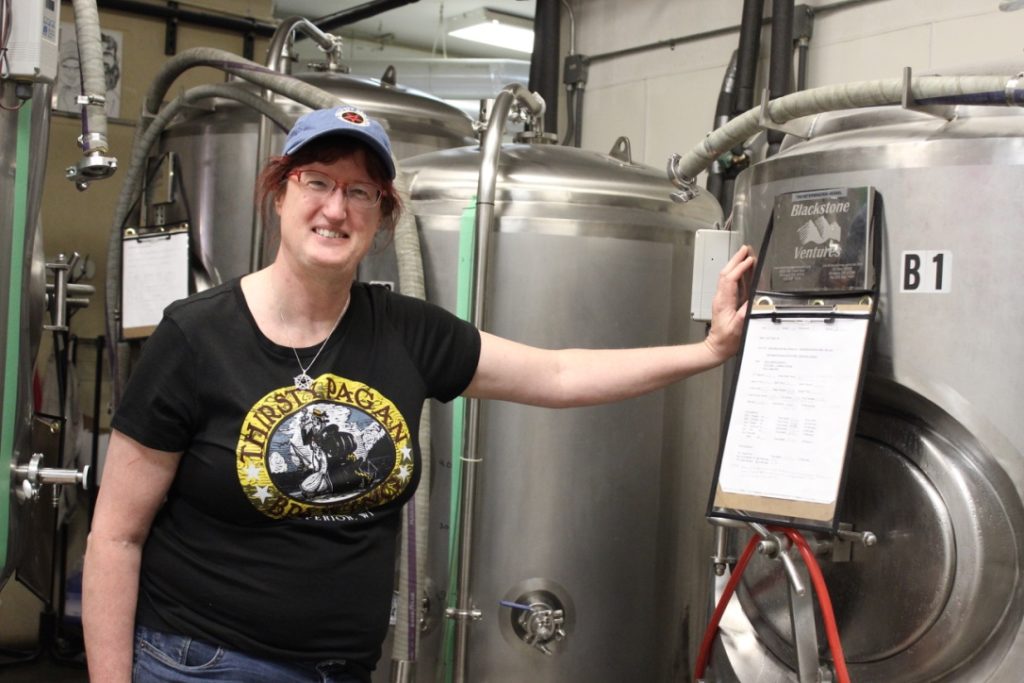 Thirsty Pagan Brewing in Superior welcomes a new brewer this week. Kathleen Culhane is relocating from the Twin Cities to the Twin Ports for the gig. Her official start date is June 25.

Area beer fans may have noticed the Thirsty Pagan’s house beers have been on hiatus for a while. Allyson Rolph left her role as head brewer last fall to become co-lead brewer at Earth Rider Brewery and her position was never filled.

Culhane is a trained chemist. Her last job in that field was as a contractor for 3M on an industrial ethanol project. She started homebrewing in 1995, which she calls a “natural hobby” for someone with this type of science background.

About four years ago that hobby transitioned into a career. She helped brew her first commercial batch under Rolph’s tutelage at Thirsty Pagan. In 2015, she opened Sidhe Brewing Company, a nanobrewery in St. Paul.

The two-barrel brewery was open for about two years before losing its lease and having to shut its doors. Fundraising efforts to open a larger brewery in a new location didn’t pan out. More recently, Culhane has worked in Fulton Brewing’s packaging department.

Culhane learned about the Thirsty Pagan brewing job last year at All Pints North. Since then, she’s been talking with owner Steve Knauss about it. She’s excited about the opportunity to work at the brewpub, noting that she and her wife visit it every time they come to Duluth and always have a hard time leaving.

“I really like the vibe. It’s a good restaurant and a neighborhood bar. It’s a lovely fusion of those things” says Culhane.

Owner Steve Knauss says he trusts Culhane to create “real solid beer that’s done and done well,” noting that her focus will be on quality and getting the pub’s five flagship beers back online over the next 6-12 months.

“She’s rock solid,” says Knauss. “She’s got a good knowledge base and foundation of experience.”

Knauss credits Brian McCarthy of Excelsior Brewing Company with helping brew some batches in the interim and getting Culhane up to speed on the specifics of the Thirsty Pagan’s brewery system. The India Pagan Ale, Lawn Chair and Burntwood Black have all been back on tap, with more house brews to follow.

Besides the regular house beers, Culhane will have a chance to show off her creativity with three draft lines. She intends to bring recipes with her that were well received at Sidhe, such as a nut brown and possibly a Belgian golden strong called Barking Cat that weighs in at 10 percent ABV.

In general, she likes the idea of producing well balanced beers that everyone can enjoy. With her analytical chemistry background, Culane promises to improve efficiency and ensure overall quality.

Customers can expect “light, easy drinking session — but clearly crafted — beer that’s not overwhelming.” Culhane is thinking about brewing a crisp pilsner for the summer.

Eventually, the goal is to get Thirsty Pagan’s sour program back online. During Rolph’s time, she established sour and barrel-aged beer programs that helped raise the small brewpub’s profile among beer connoisseurs from the Twin Ports and further afield.

Sour beer isn’t yet in Culhane’s repertoire, but she’s looking forward to continuing her education. She’s never been one to shy away from a challenge.

In an industry where dudes with beards are still the stereotype, Culhane, who is transgender, feels fortunate that she’s been “accepted without question,” but she notes, “When doors shut, I tend to kick them open or go around.”

Culhane is a practicing Wiccan, which means the Thirsty Pagan now actually has a pagan brewer. She points out the world’s oldest beer recipe was a tribute to Ninkasi, the ancient Sumerian goddess of beer, and notes that her spirituality is closely tied to her chosen profession.

“It explains why I’m so passionate about what I do, because the job is such hard work. But I do love it. It’s church,” she says. “Brewing is a spiritual practice. It’s creation is an act of magic.” Where in Duluth? PDD 15th Anniversary Challenge #3 of 15