Is Bottoms Up the beer pouring device of the future? 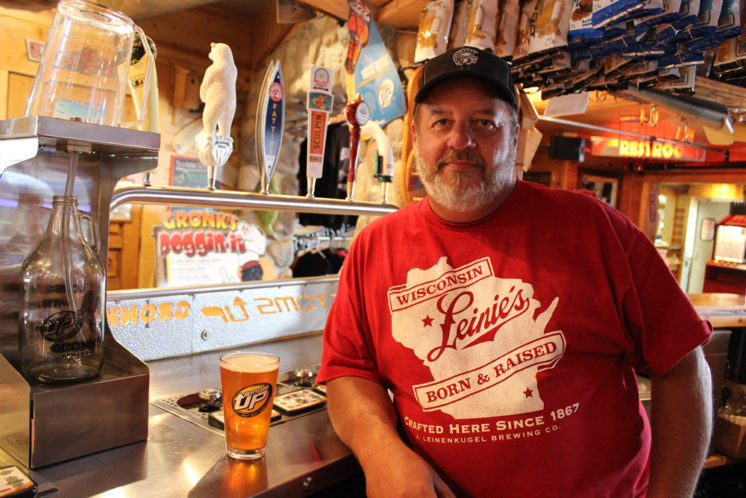 Gronk’s Bar and Grill in Superior has long been known for serving burgers upside down. In February, the bar was the first in the area to install a remarkable tap-beer delivery system that fills glasses from the bottom up. Since then another Superior drinking establishment, Jack’s Place, has also added a Bottoms Up system in its beer garden.

Gronk’s owner Mike Mohr first saw the Bottoms Up system at the Wisconsin State Fair. He was impressed with its technology and speed. Later, when his daughter was advocating for more craft beer taps at Gronk’s, he thought the novelty might be a good way to draw beer fans in.

Bottoms Up uses patented glasses, made from glass or recycled plastic, which have a hole in the bottom. Before filling the beer, the server puts a food grade magnet in the glass and then places the beer on the dispenser. When filled, the system automatically stops pouring and the magnet seals the glass as it’s removed. Customers can take the magnets home as souvenirs. This video demonstrates the filling process.

When asked about the new-fangled system’s cost, Mike replies that he considers it an investment. “I don’t buy anything that’s going to cost me money. I buy things that are going to make me money.”

Mike says Bottoms Up saves 25 percent of the beer in a keg from being poured down the drain — essentially one of every four kegs — because, unlike traditional tap lines, beer isn’t wasted due to foaming or spilling. “People think of the perfect pour as having 1.5 to 2 inches of head. But that’s not good for customers because they aren’t getting a full pour and it’s not good for us because we end up pouring beer down the drain. This is a win-win, for the customer and for us.”

Josh Springer, inventor of the Bottoms Up dispenser, explains that in a traditional tap line beer often foams due to temperature differentials. But with Bottoms Up, the base of the device is insulated and not subject to the same shifts in temperature as a tap handle. In addition, pouring from the bottom up means there aren’t factors like gravity or server pouring errors to contend with.

“Draft Beer. Warp Speed.” is the Bottoms Up tagline. The system allows Gronk’s beer to be poured in as few as 3.5 seconds. Springer says it’s the fastest system he has installed so far. Multiple beers can be poured at the same time, which allows servers to multitask. It’s easy to understand why Bottoms Up is making its way into stadiums and arenas, the speed of pouring reduces waiting lines and encourages customers to buy more beer. Gronk’s has 23 taps operating on the Bottoms Up system, 12 of which are craft beers. They also have a Bottoms Up growler filling station.

Gronk’s has been around for 21 years. Its logo is a caveman, based on a character from the old television show Land of the Lost. Mike thinks the new system complements his business theme and pushes it forward. “We’re the upside down place and this is Bottoms Up. It’s like an astronaut landed and met Gronk. We’re prehistoric and this is the future.”

August is waning. How's your short term memory? How much do you remember of what happened in and around Duluth...