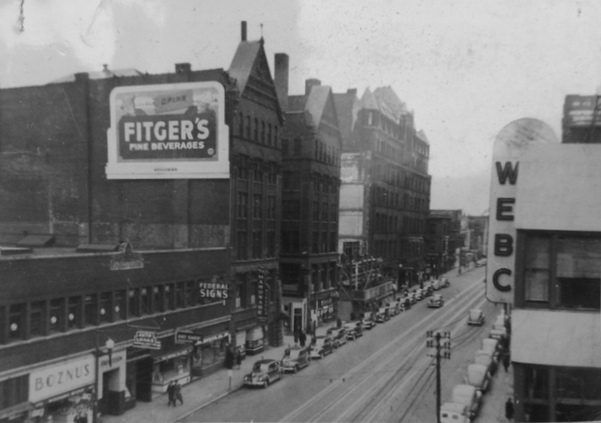 The above photo, submitted by Jay Sonnenburg, shows businesses on the 400 block of West Superior Street. At right is the WEBC Radio studio. At left are the Fargusson Building, Manhattan Building and Spalding Hotel.

So, when was this photo shot? The WEBC studio was built in 1937, and the Manhattan Buildling was razed in 1941, so that’s a window the photo can be easily narrowed down to. Are there any details in the image that pin it to a tighter time frame?

Below is the best I could do creating a modern day version of the old photo without access to the roof of the Phoenix Building or a drone. Glare and reflection from the Skywalk window mare the view, but the perspective is better than I could get on the ground. Today the entire northwest side of the street is the Maurices headquarters. On the southeast side the Fargusson still exists; it was renamed the Stanley Center in 2004. The Ordean Building is at the far end of the block where the Spalding once stood. Another mystery: Does the building in the middle, at 406-418 W. Superior St., have a name?