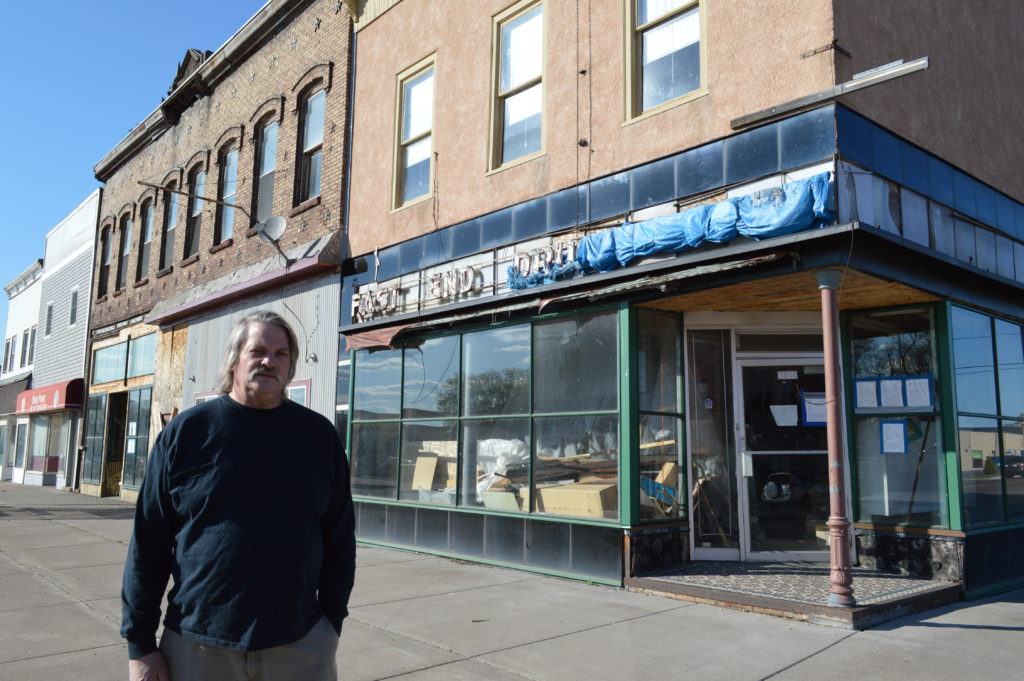 Walter Haugen stands in front of buildings on the 2100 block of East Fifth Street, all planned for demolition this spring.

He pointed through a hole in some foam panels overhead. The hole exposed a tin ceiling most likely installed when the building was constructed in 1878. Dozens of silver, square tin tiles decorated the ceiling.

Haugen said someone could be hired to take down the tin, which could be sold for a hefty price to antique dealers or architectural salvage specialists. But it won’t be done.

“It would be like gutting a relative,” he said. “It would be like if you had a pet deer that you raised and someone asked you to chop it up and sell them the meat. You just wouldn’t do it.”

The East End Drug Store, on the corner of Fifth Street and 22nd Avenue, anchors a collection of storefront buildings in the oldest business district in Superior. The 19th Century buildings are expected to meet the wrecking ball in the coming weeks, opening a prime corner to commercial redevelopment.

The changes have left those with deep neighborhood roots upset and frustrated while city leaders are excited about giving the corner a fresh new look.

The city of Superior placed a raze order, a process similar to condemnation, on the East End Drug Store in 2015. The structure also housed the Office Bar, which closed last October, and East End Radio, a repair shop that occupied the building since the 1940s. The corner of East Fifth Street and 22nd Avenue in Superior’s East End as it looked in 1975. (Photo via Superior Public Library)

The adjacent Shear Power Hair and Tanning Salon, at 2125 E. Fifth Street, and the former Holmes East End Bakery to the north are also being slated for demolition. The bakery building, longtime home to Pesark Grocery, was deeded to the city in February and a raze order was placed on the former hair salon earlier this year.

Kruit said the four structures on three properties are in various states of disrepair and pose serious public safety threats. “The problems all have to do with age, deterioration and lack of upkeep,” he said. “They will all be coming down soon.”

The city has started work on two of the three buildings, removing asbestos and selling salvaged materials from the bakery and drug store. Negotiations between the city and property owner are continuing for the sale and demolition of the now vacant hair salon.

Superior Planning, Economic Development and Port Director Jason Serck said the corner has no pending plan. He said the property is zoned for commercial use and could also take on multi-unit housing. Developers would need to present plans to the city.

The first step, he said, will be to clear the property.

“It would be nice to do it all at once,” said Serck. “Then we can determine how we want to market the property. All together makes more sense than apart. I’m sure developers would like to start with a clean slate there.”

New East End development, including the 2014 opening of a 60,000-square-foot Super One grocery store off Highway 53, has spurred interest in the neighborhood, said Serck.

Rick Livesey, owner of the Shear Power hair salon building, is the final holdout in the Fifth Street project. Livesey is not happy with the order to raze his building, saying the order is a form of eminent domain. The Shear Power Hair and Tanning Salon closed in 2014.

“They’re kind of being mean to me right now,” he said. “I put a lot of money into it, a lot of sweat and now they want me to tear it down.”

Livesey said his 1892 building passed city inspection in 2015. But drug store and bakery demolition on both sides of his property will create new structural issues. Livesey said the city inspected the building again in 2016 and ordered impossible improvements.

“I’m wondering why all this is happening now,” he said. “Is somebody interested in that corner?”

Livesey has hired an attorney and negotiations are ongoing. The city offered to pay $10,000 for the property and $60,000 in demolition costs, he said. Livesay bought the property five years ago for $110,000.

“If I agree to that I’m facing bankruptcy,” he said, “and I’m not going to file for bankruptcy.”

Haugen said his brother Arthur, who owns the corner buildings, spent $450,000 on structural improvements to the old pharmacy and bar. Steel birders were installed to stabilize the facade, he said, but it wasn’t enough to save the family building.

“(The city) wants to have the neighborhood look fresh and new,” said Walter Haugen. “They want to be progressive. My brother put a lot of steel into that building but that’s not what they wanted. I guess he should’ve done more cosmetic work instead.”

“In the end he just gave up. The city always wins. They always do.”

Walter Haugen restored the historic Northern Block building and Pudge’s Bar, both just down Fifth Street from the old drug store. Pudge’s regularly hosts an informal gathering of East End historians and life-long residents. Haugen said most are troubled by the changes.

“There were so many businesses in the East End. Everything you needed was out here. It was a strong community out here. Then stores like Walmart opened up and that destroys the small businesses.” he said. “It’s a changed world.” 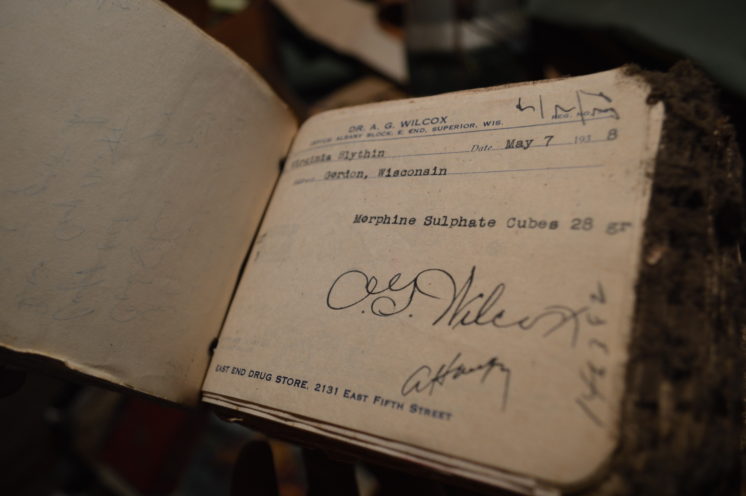 Superior Public Library librarian and city historian Teddie Meronek agreed. She grew up in the East End and worked her way through college at the East End Bakery.

“The East End used to have everything,” she said. “I remember the drug store. My father and I would go there every Sunday after mass and sit at the counter. … It’s sad.”