Hollywood rumor: Will Ferrell will star in film about snowmobile adventure hatched over drinks at Duluth’s Pickwick Just two weeks ago Perfect Duluth Day linked to a New York Times article about Ralph Plaisted’s 1968 expedition to the North Pole by snowmobile. Yesterday the online infotainment website Deadline reported producers Wyck Godfrey and Marty Bowen and actor Will Ferrell will make a movie about the Minnesota adventurers.

“They’ve acquired Guy Lawson’s article for The New York Times Magazine, with a title that tells you everything you need to know: ‘Ice Pack: An Insurance Salesman and a Doctor Walk Into a Bar, and End Up at the North Pole,’ Deadline reports. “They will build the film around Ferrell.”

Plaisted was a native of Bruno, a small town about 50 miles southwest of Duluth. An insurance salesman and avid outdoorsman, he first became known as an adventurer in 1965 for a simple 13-hour, 250-mile snowmobile trip from Ely to White Bear Lake. Snowmobiles were a fairly new invention at the time, and Plaisted’s trip is considered the first long-distance ride.

His 1968 North Pole trip included five companions: Walt Pederson, Gerry Pitzl, Jean-Luc Bombardier, Dr. Arthur Aufderheide and Don Powellek. The adventure was purportedly conjured up in Duluth over drinks at the Pickwick between Plaisted and Dr. Aufderheide, who was a Duluthian.

Aufderheide died in 2013 at age 90. He and Powellek did not make it to the North Pole with the rest of the team; they peeled off and returned to base camp to help with logistics. Plaisted died in 2008 at age 80.

Belew is what might be the last Plaisted interview, reprinted from the Forest Lake Times for the May 15, 2008, issue of “the most read weekly newspaper in Northern Pine County,” the Askov American. 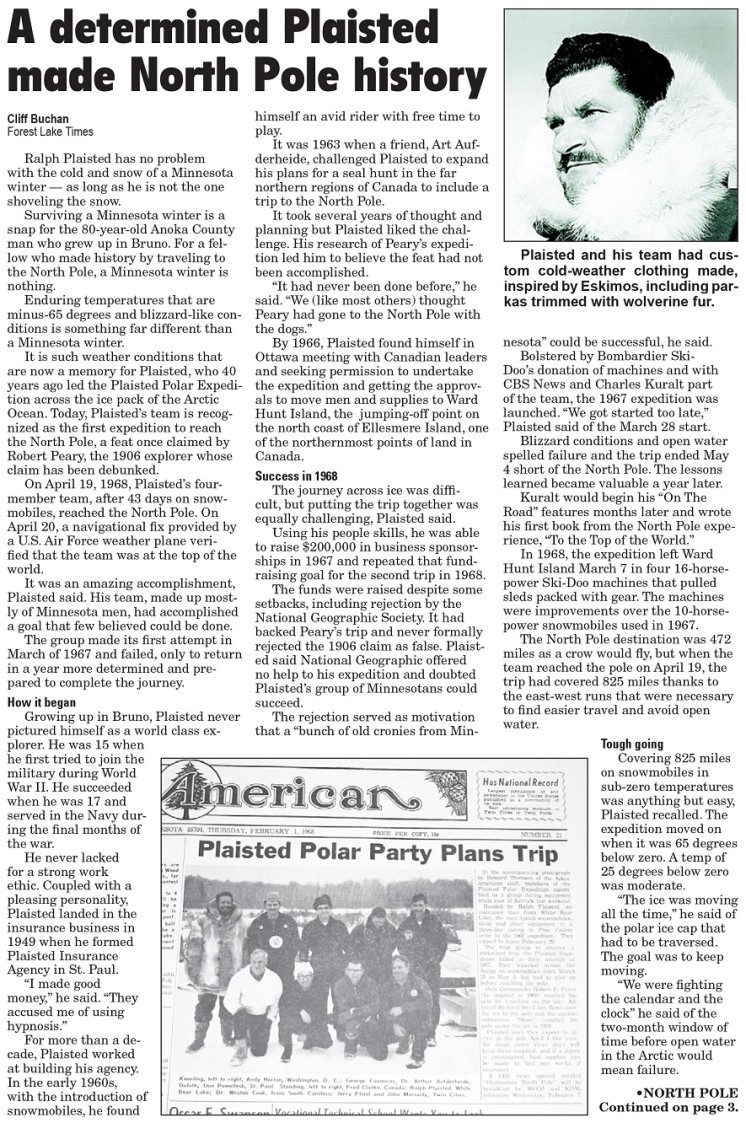