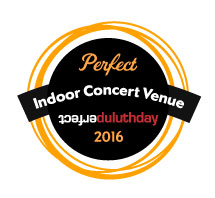 When it comes to picking the best indoor concert venue, there are a lot of things to consider — seating, acoustics, general vibe, etc. There might be plenty of room for argument on just about any criteria, but in one facet Duluth has a clear winner. It would be tough to dispute that any local concert hall, club or coffee house has consistently brought more high-caliber talent to its stage in the past two years than the Red Herring Lounge. Among the top four in PDD’s poll, the Herring pulled out a clean win with 35 percent of the vote.

It was June 2014 when Bob Monahan opened what he called an “artist friendly” lounge at 208 E. First St. — the site of the Rocket Bar from the 1940s to ’70s. The three-day grand opening event included live music by 16 bands, and it was just the beginning. (Oh, and there was also a photo booth.) It can’t be compared to UMD’s Weber Music Hall for sound quality, there’s no fancy architecture like Sacred Heart Music Center, no large audience capacity like Amsoil Arena or Clyde Iron Works, and it’s décor is a bit too modern to have the same dive-bar appeal as R.T. Quinlan’s, but the Herring sounds good enough, fits enough people, has a fun atmosphere and packs in one great show after another.

Most of the early Herring concerts were local favorites, with Twin Cities acts like Hippo Campus and Gramma’s Boyfriend sprinkled in here and there — and there was also the Super Big Block Party featuring Har Mar Superstar, Dead Man Winter and Lizzo — but the 2016 lineup is just on a whole new level. Dem Atlas, Mike Mictlan, the Bad Plus, Buckwheat Zydeco, Pert Near Sandstone, Aaron Carter, Kid Dakota … and most of the year’s shows aren’t even announced yet.

Honorable mentions for best indoor concert venue in the Duluth area go to Sacred Heart Music Center, which took second place with 26 percent of the vote, Clyde Iron Works, which took third with 21 percent, and R.T. Quinlan’s, which placed fourth with 18 percent.