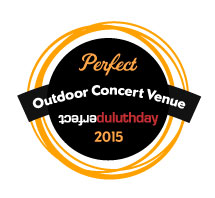 The Minneapolis Star Tribune also named Bayfront the state’s “Best Outdoor Music Venue” in 2014, noting: “It has the Aerial Lift Bridge, hilly city skyline and occasional passing ore boat for a backdrop, the cool breeze off Lake Superior for natural air-conditioning and a huge grassy lawn for stretching out. … Coolest of all: Families can bring kids under 12 to shows for free, as is dictated by the city.”

Bayfront, of course, is so much more than a concert venue. There’s a Family Center for special events, a skating rink in winter months and Playfront Park for kids looking for monkey-bar action. The grassy amphitheater-shaped bowl hosts numerous non-music events, such as the Bentleyville Christmas-light display in November/December, and is often used simply for kite flying, picnicking and random lounging after Lakewalk strolls.

In it’s earlier years, Bayfront was a 14-acre park with a yellow canvas tarp over its stage and flat, sometimes muddy grounds. Changes began in the late 1990s, when the Great Lakes Aquarium was built on part of the parkland. The major Bayfront renovation came in 2001, when the park reopened with a new 76-foot-tall steel-canopy pavilion designed by Duluth architect Randy Wagner. The concert area was also landscaped into a bowl shape with better views and an archway for a more impressive entrance. The improvements were made with the help of a $3-million donation by the now-late Lois M. Paulucci, for whom the music pavilion is named, and were based on the recommendations of a task force assembled by then-mayor Gary Doty.

Bayfront Park is owned by the city of Duluth, with the Duluth Entertainment Convention Center serving as its manager for concert rentals. Audience capacity is roughly between 15,000 and 20,000 depending on how many people are sitting vs. standing.

The runner up in our poll was Big Top Chautauqua, located at the base of Mt. Ashwabay Ski Hill near Bayfield. Known for small, intimate shows featuring major touring acts performing under a canvas tent, Big Top has been a regional favorite since the 1980s. Big Top garnered 19 percent of the vote, while Duluth’s Leif Erikson Park pulled the remaining 9.5 percent. Other options were eliminated through runoff voting.

Heiko has a party