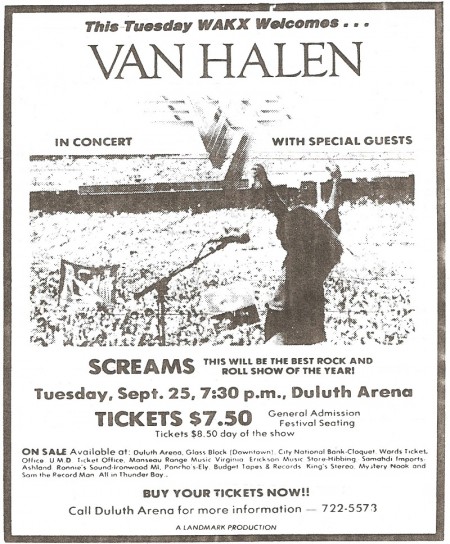 A while back we started a master list of concerts at the DECC (formerly Duluth Arena) to help people sort out their fuzzy memories of rocking out back in the day. Since the list is kind of a slap together of info submitted to PDD in comments, it contains some incomplete and inaccurate information. (We would like it to be complete and accurate, but that would require a level of diligence we are unwilling to accept.)

We received a note over the weekend from PDD user “duluthyouth” pointing out that “Eddie Money opened for Van Halen in 1979, not who you had listed.”

A search through newspaper microfilm found no review of the 1979 concert, but the advertisement above (from the Duluth News Tribune) indicates “special guests” and specifically notes the band Screams is on the bill.

Here is a clip of Screams from the Mecca Arena in Milwaukee from the same tour.

And here are thumbnails of photos from Ken Kalligher’s MySpace page of Van Halen in Duluth, which Kalligher notes are circa 1979 and “taken w/ a Pentax ME 35mm.”

So, was Eddie Money a special guest at the 1979 Van Halen show? Someone prove it. (Or, you know, substantiate it on some level.)

Another confirmed Van Halen show in Duluth was on March 29, 1978. Journey was the headliner, with Van Halen and Montrose opening the concert for an estimated audience of 800 in the Duluth Auditorium (which is now the DECC’s Symphony Hall).

Surprisingly, or maybe not so surprisingly, Van Halen was panned in Rick Shefchik’s review in the Duluth News Tribune.

Van Halen opened, coming on like a poor man’s Black Oak, complete with a lead singer in leather pants and what looked like rhinestones in his chest hair. A lot of jumping, a lot of shouting, a lot of fun with electricity but only “You Really Got Me,” an old Kinks classic, really got me.

Where should I get my Christmas tree?

Does anyone know of a good place where you can chop down your own tree?