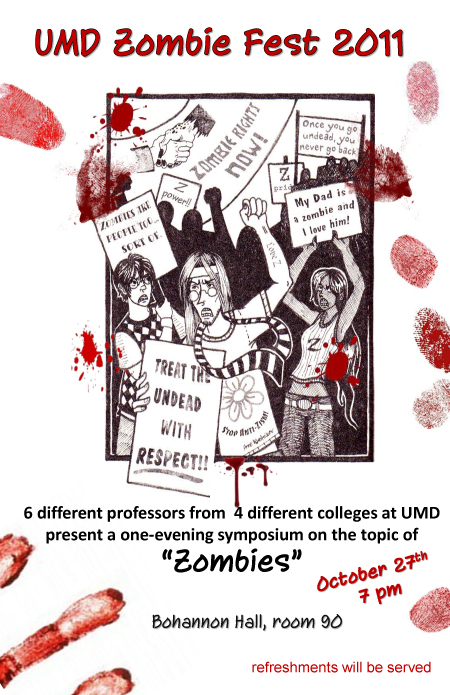 Join us for a zombie-themed symposium that is free and open to the public. Six UMD professors will give talks about how their work relates to zombies. Refreshments appropriate for the topic will be served. BYOB (Bring Your Own Brain).

John Schwetman (English) will discuss the “zombie” as a literary trope tied to the Apocalypse. He will trace the evolution of this trope from Haitian culture through George Romero’s “Living Dead” movies up to their appearance in Cormac McCarthy’s novel The Road. The zombie often serves as a euphemism for aspects of the human condition that are too unpleasant to confront more directly.

Scott Carlson (Psychology) will discuss how modern psychiatric definitions of what constitutes a mental disorder would apply to “zombie-ism”. Under what circumstances would the behavior exhibited by zombies qualify as a disorder? When would it not? What would the criteria for such a disorder look like? The implications for the rationale behind current psychiatric classification practices would be illustrated.

John Dahl (Biology) will discuss the discovery of prion-associated infectious diseases, particularly kuru, which was first identified in the Fore people of Papua New Guinea. Also known as “the laughing death,” kuru was spread by ritualized cannibalism and led to loss of motor skills and cognitive function and eventual death.

Tim Craig (Biology) will discuss how parasites can take over the brains of insects and other animals to manipulate their hosts for their own purposes. The parasitized host moves like a zombie into predator-infested areas where it behaves in a bizarre manner which insures it will be eaten. This is bad news for the host, but accomplishes the goal of the parasite: it moves on to attack its next host the predator.

David Cole (Philosophy) will discuss the “ethics of killing zombies” and focus on definitions of life and the ethics of suffering and behavior.

Edward Downs (Communication) will discuss the history of zombie-themed video games with potential benefits to society of playing these games.

There was an incorrect ad in a Duluth Playhouse playbill last month, so local theatergoers may have gotten misinformation about...