Hungry Hippie Tacos opened at the end of May in the former Westside Pet Clinic location at 1810 W. Superior St. in Duluth’s Lincoln Park neighborhood. Photo by Jayden Erie

An array of new restaurants are taking root around Duluth, and tacos continue to be the trend. April and May saw two new taquerias open in Duluth, along with a full-service Mexican restaurant in Superior. At least three more enterprises offering Mexican cuisine are coming later this year.

From authentic Mexican dishes to experimental frybread creations, from taqueria to taco truck, here’s a summer guide of new spots to try. Tacos Tacos Tacos food truck is making the rounds this summer, and its second go-round as a brick-and-mortar taqueria in Downtown Duluth is coming up later this year. Photos via Tacos Tacos Tacos on Facebook.

Tacos Tacos Tacos will open its new location near the end of summer or in early fall at 202 E. Superior St., but it maintains a presence in Duluth throughout the summer via a food truck. Customers are treated to a culinary experience similar to that of an authentic Mexican taqueria, according to owner Robert Giuliani.

“In Mexico this is exactly what you’d find,” Giuliani said. He has visited 250 taquerias in Mexico over the past three years. After learning recipes and hanging out with the owners of taquerias in his travels, he’s returned to offer traditional taco recipes to the Duluth area. These most often involve two corn tortillas, cilantro and onions, and no sour cream or lettuce.

Giuliani has already operated a brick-and-mortar taqueria in Downtown Duluth. That Tacos Tacos Tacos location was open from March to October 2021. The new location will be in the former T-Icy Roll Ice Cream spot across from the NorShor Theatre.

One of Tacos Tacos Tacos most popular menu items is Al Pastor, the house-specialty taco with rotisserie-cooked pork that’s marinated Jalisco style. Tacos Tacos Tacos received a nomination for Minnesota’s best taco and best Mexican restaurant by the Star Tribune in 2021 and again in 2022. 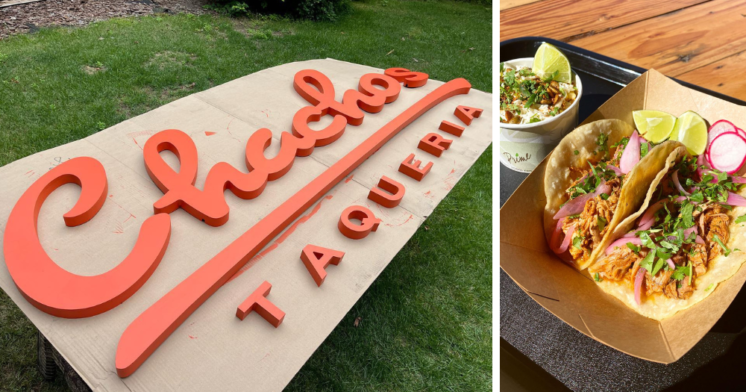 Chachos Taqueria opened on April 16 at 329 Canal Park Drive and serves a wide variety of Mexican eats in Canal Park’s prominent tourist area. The restaurant’s new walk-up, window-style location is open every Wednesday through Sunday from 11 a.m. to 6 p.m.

Owners Aaron Maloney and Alex Giuliani met working at the American seafood restaurant 4 Bells in Minneapolis and decided to implement their knowledge of fine dining into their own Mexican street-food style restaurant. They’re excited to bring a different variety of Mexican food to the Duluth area, and emphasize “being authentic to the style and roots of Mexican dining,” Maloney said.

He added that they strive to make fun, authentic Mexican favorites into their own, like their beef birria taco — a unique and flavorful favorite with their birria beef, onions, cilantro and oaxaca cheese. In addition to their beef, pork and vegetable tacos, they offer chicken bowls, steamed corn-husk tamales — which are steamed fresh everyday — and roasted corn salad. Their variety of five distinct salsas are also made fresh within a day of serving. Hungry Hippie Tacos opened at 1810 W. Superior St. in Lincoln Park during the last week of May. Owners Kate and Jeremy Keeble began their taco journey when they purchased Hughie’s Tacos in Grand Marais several years ago. They decided to continue to serve tacos with a modified version of the original owner’s fry bread recipe, rolling the fry bread out thinner and folding it in half to create their special tortilla. They call it “Northern Fry Bread Tacos.”

“It’s fun because the not-traditional tortilla allows us to think outside the box with what we put in them,” owner Kate Keeble said. In addition to their beef, chicken and pork tacos, one of their special offerings has included the likes of a cheesesteak taco.

They also offer barbeque favorites like their apple smoked pork and brisket, which integrates Jeremy Keeble’s strong connection to barbeque that he developed while growing up on the Mason Dixon line.

Kate Keeble said they’re looking to expand their menu even more, and are especially excited about the “bigger reach on ingredients and people’s pallets” they’ll see in Duluth. The Oasis Del Norte food truck has been in operation since 2015, but its streamlined Taqueria-style storefront should open in late fall or early winter. Owner Eduardo Sandoval Luna worked in his mother’s restaurant growing up in Mexico, and draws on many of her recipes in the food he makes today.

“I want the Northland to know who we are as a Latino culture,” Luna said. “I’m sharing my culture one real taco at a time.”

Oasis Del Norte focuses on using fresh and local ingredients in its Mexican cuisine, which includes authentic street tacos, burritos, quesadillas and nachos. Luna first set up his food truck during the Allouez Bay ice races in Superior, where he brought “the most authentic [Mexican] recipes to the most northern sport,” Luna said.

The new brick-and-mortar location will be at 2401 W. Superior St. in Lincoln Park, formerly the Big Bottle liquor store. Bucktales Cantina and Grill opened a second location in Superior during the first week of May. The original location is near Pattison State Park at 6098 S. State Road 35. The new location is in downtown Superior at 1015 Tower Ave., in the space of the former Shorty’s Smoked Meats and Pizza.

The menu features single plates of authentic Mexican dishes as opposed to combo platters that are typical of traditional Mexican restaurants, owner Dee Morales said. He added that he enjoys doing his own thing as a cook, and only serves dishes that he enjoys. “Something is only on our menu because I like it,” he said.

In addition to tacos, Bucktales offers authentic Mexican eats like chimichangas, burritos and tortas. The chips and salsa and homemade. Morales said he hopes to implement a new menu in July that will feature new tacos and other new Mexican food options. He pays attention to what’s trending, and said he tries to adjust to what people like.

A second Mexico Lindo restaurant is expected to open in the Denfeld Retail Center in West Duluth. The company took over the former GB Schneider’s location in May and has applied for a liquor license. Owner Lorena Velez said the restaurant is not ready to go public about its plans for the new location.

The original Duluth Mexico Lindo opened in the Fitger’s Brewing Complex in 2010. At the time it was the second Mexico Lindo, the original having opened in Cloquet in 2006. The Cloquet restaurant has since changed ownership and became Pedro’s Grill and Cantina in 2015.

Also of note in the taco circuit: Superior is expected to get its first Taco Bell this fall. The California-based chain has more than 7,000 locations. Construction is underway in Superior at 3541 Tower Ave.