Postcards from the Duluth Arena-Auditorium Included in this post are four postcards, all published by Gallagher’s Studio of Photography, showing the early days of what is now known as the Duluth Entertainment Convention Center. Numerous buildings have been added to the DECC campus over the years, but these postcards show only the original two, then known as the Duluth Arena and Duluth Auditorium.

Captions of the backs of the cards are inconsistent with some of the numbers they present. Clarifications on those figures is at the end of the post.

The caption on the back of the first postcard reads:

Duluth Arena-Auditorium
Located on Harbor Drive, Duluth, Minnesota, this beautiful multi-purpose facility has an arena that accommodates up to 8,000 people, an auditorium with seating capacity of 2,400, exhibit hall, 7 meeting rooms and complete banquet facilities. Parking lot with space for 2,000 cars. Completion of the Arena-Auditorium in 1966 makes Duluth the convention, cultural, entertainment and sport center of the upper Midwest. The caption on the back of the second postcard, which shows a drawing that predates completion of the project, reads:

Arena-Auditorium
Duluth, Minnesota
5th Ave. West and Waterfront
This beautiful new $6,100,000 multi-purpose facility will have an auditorium to accomodate 2,500 people, an arena with seating capacity up to 8,000 persons, an exhibit hall, 9 meeting rooms, and complete banquet facilities. The Arena-Auditorium will make Duluth the convention, entertainment and sports center of N.E. Minnesota. The building will be completed in 1966. 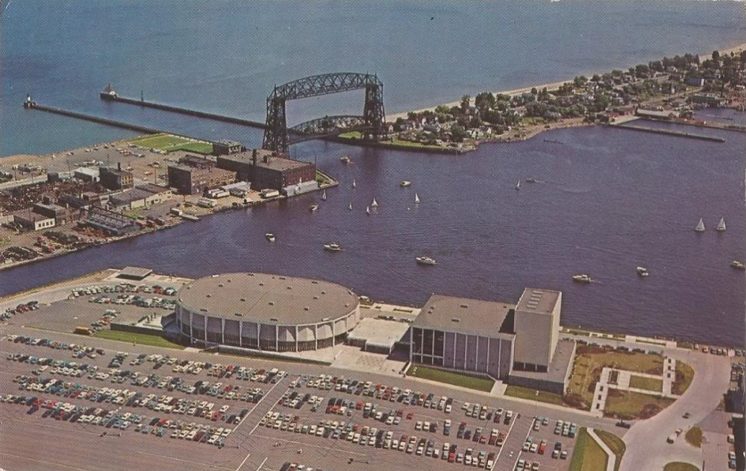 The caption on the back of the third postcard reads:

Duluth Arena-Auditorium
Harbor Drive, Duluth, Minnesota
New $6,500,000.00 multiple-purpose facility has an auditorium to accommodate 2,400, an arena with seating capacity up to 8,000, Paulucci Hall for exhibits and trade shows, 7 meeting rooms and complete banquet facilities. Boat races are held during the annual Portorama Celebration. The final postcard features split scenes that both include the Duluth Arena-Auditorium. The caption reads:

Duluth, Minnesota
Convention Center of the Northwest
Duluth is built upon terraced hillsides overlooking the Duluth-Superior Harbor, Lake Superior. The Duluth Arena-Auditorium, located on the waterfront is the Convention Center of the Northwest accommodating 2,400 in the Auditorium and up to 8,000 in the Arena. Duluth’s Boulevard Drive skirts the brow of the hill for a distance of 27 miles.

Jeff Stark, director of operations at the DECC, offered some insight and clarity to the numbers above. He said although the arena’s initial capacity was listed as “up to 8,000,” the reality was that maximum capacity was somewhere between 6,500 to 7,000 for a show in the round, and modern fire codes reduced that number during the 1970s and ’80s. The DECC Capacity Guide lists the arena’s capacity at 6,441.

Surface parking prior to construction of Pioneer Hall in 1976 was indeed around 2,000 cars, Stark said.

The initial construction costs of the building are listed on one card as $6.5 million and another at $6.1 million. Stark said $6.5 million is the number the DECC uses. “This sum came from a mix of federal and state sources for initial construction,” Stark said. Subsequent expansions have been funded with a combination of State of Minnesota and city of Duluth bonding.

The auditorium capacity is listed at 2,400 on three cards but 2,500 on another. The DECC website lists the auditorium capacity at 2,221. Stark said the initial seating was a little less than 2,400. “The seating was replaced and more legroom was added in the early 1990s and we’ve added two additional handicap-seating platforms that have further reduced capacity to 2,289,” he said.

One postcard mentions there were seven meeting rooms, but another counts nine. Stark said the initial meeting rooms were Paulucci Hall (dividable into five meeting rooms) and the Bridge and Walnut rooms, which were where the renovated UMD locker rooms are currently located on the harbor side of the DECC Arena. “There were an additional four meeting rooms with those factored in, so nine is correct.”

https://www.youtube.com/watch?v=nHkB84phv0s A Proctor family uncovered a surprising connection when buying a house -- it had belonged to Anna Larsen, a...