It’s Tuesday, Sept. 11, 2001, 10:30 a.m. I’m standing in my kitchen munching on an apple. Suddenly, a huge man who looks like the professional wrestler Razor Ramon comes thundering through the front door announcing that he is an employee of the Water and Gas Department and needs to read the meter.

Without asking for identification or taking any security precautions whatsoever, I show him to the basement stairway and resume chomping on my apple. Soon, my basement housemates greet Razor Ramon and he starts talking to them about how the country is at war.

I turn on the television in the living room and see a huge cloud of smoke and debris where the World Trade Center once stood. The news anchor explains that two hijacked passenger jets smashed into the towers, causing them to collapse.

Razor Ramon seems to be less shocked about what happened in New York than he is that no one in my house has turned on a television or radio yet. He repeats at least three times, “I can’t believe you haven’t had the TV on.”

Although it seems like he’s simply baffled that my housemates and I are spending time not watching television, what’s probably going on in his head is that most people are already aware of the significant event taking place, but we are not, and he will be the person who provides the strange and awful summary.

So Razor Ramon and the basement tenants join me in the living room to watch the news coverage. Ten minutes later, Razor decides he better get back to work. Shortly after that my housemates break off to go grocery shopping. 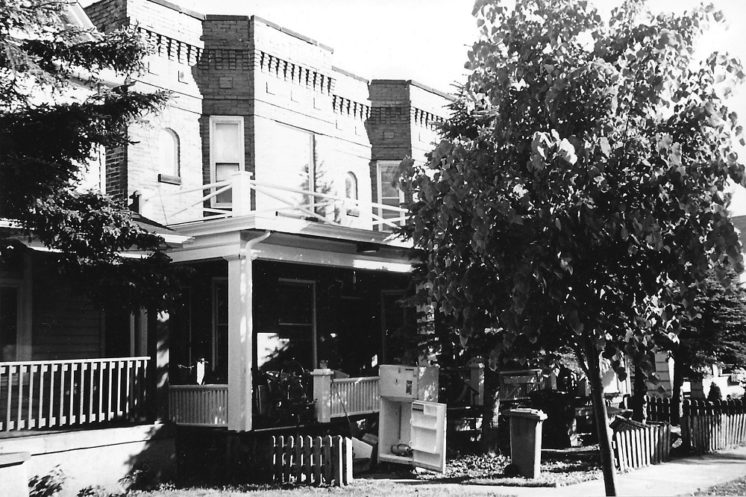 Exterior photo of the rental house where this essay is set. Photo by Paul Lundgren, June 6, 2001.

I’m transfixed, and stay on the couch watching the live broadcast and repeated crash and collapse videos. I’ve seen enough death on the news to be somewhat desensitized to it, but this is different. It’s death on a grand scale, through bizarre tactics, with remarkable and chilling results.

As much as I want to take what’s happening seriously, though, the various TV stations keep attempting to dramatize what’s happening — as if it isn’t dramatic enough on its own — by coming up with titles for the special news coverage. “Attack on America” is the first one I notice. Then I turn the station to see “Day of Terror,” which feels both accurate and tacky.

As the clock creeps past noon, I decide to report to work at the local weekly newspaper, where I’m being phased out of employment. As I walk down Superior Street, everything looks normal in Duluth, but it feels really weird. Everyone is watching each other for clues about how we are supposed to behave. The assumption at this point is that everyone knows what has happened, and the world is supposed to have changed, even though little has really changed in Duluth. It’s a normal day, except for the news.

When large-scale tragedies occur far away it’s not easy to quickly determine one’s relationship to it. Are the victims all simply fellow human beings, or is my third cousin’s ex wife among the deceased? Every distance from grief is an awkward space.

At the Ripsaw office, the television is on for the first time I can remember. I’m only vaguely aware a TV even existed in that lounge prior to today, but now I drop in every 10 minutes, watch a few replays, sigh, shake my head and go back to work. Everyone else does the same thing. What can we do about it? Do we have to keep watching the horror? Will it make us better people the more we acknowledge it? Moving on as much and as fast as possible seems the safest move for our mental health.

It’s Primary Election Day, so when I leave work I have two hours to vote in the City Council races before I’m due at a dinner party. In New York, everything is devastation. One thousand miles away in Duluth, time marches on.

Because I have recently moved to a new precinct, I have to find a registered voter in my neighborhood to vouch for me at the polling place. None of my housemates are home, so I decide to knock on the doors of various neighbors to see if anyone is planning to vote soon and will walk over with me to confirm my Jefferson Street citizenship. With the day’s events in mind, I can’t help but wonder if anyone will be suspicious of me and my odd request. Eventually I find a guy who is willing to go vote with me if I’ll wait until he finishes dinner. It’s a deal.

After voting, I end up arriving late to my scheduled gathering, where another guest is informing everyone that her brother works in the World Trade Center. She woke up this morning to her sister screaming at her through the telephone about what might have happened. Later in the day they were told their brother was not at work and is alive and uninjured.

Despite that bit of good news, this dinner guest is obviously still shaken. She expresses relief about her brother’s safety, but she is noticeably hurt that many of her brother’s coworkers — one of which is his best friend — are probably dead. Within two minutes, the dinner conversation changes to a new subject and the whole table is loudly laughing and joking as if no one died today.

Of course, we’ll never fully move on, but we do have to move on, all of us separately, all of us together, the best we can. Thoughtfully and tastelessly, obsessed and oblivious.

I'm still talking around 9/11 as I write this series of posts. I am worried that any effort I put...