I started visiting New York City while I was still a kid in Milwaukee. I used to hop the Greyhound at 10 p.m., catching the connecting bus in Chicago, to a layover, bus cleaning, and reboarding in Cleveland, where large numbers of Amish would board, too. From Cleveland to Pittsburgh to, I think, “King of Prussia” (avoiding Philly, I think).  From there into New York City, landing at the Port Authority.

On my first trip to New York, when I was in high school, I promised myself to walk the length of Manhattan, from Battery Park to Central Park, several times, so that I could see everything. Even then, “seeing everything” meant a McDonalds every few blocks, a Starbucks every few blocks, and so on. Manhattan is, in some ways, the Mall of America writ large — it is the largest, but because there are two Build-a-Bear Workshops, it feels less impressive than it might.

And yet, while there are 74 McDonald’s in Manhattan, there is only one Metropolitan, only one Cooper Hewitt, only one World Trade Center. And so, while on the long walk from the Strand bookstore to Battery Park, I decided to stop at what was then one of the tallest buildings on Earth. At that point, I remembered the World Trade Center because it was a supporting character in the King Kong remake motion picture of the 1970s.

In a few years, the WTC would be a part of Homer Simpson’s awful trip to New York. 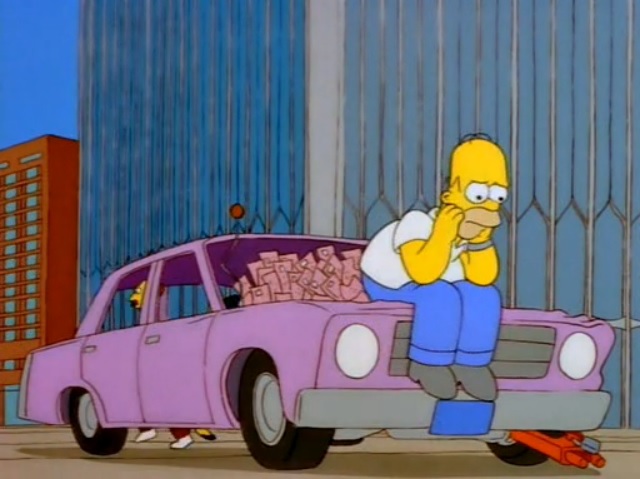 Still from The Simpsons

In the 1990s, visiting the World Trade Center was a “bucket list” thing to do, even though, in visiting the Sears Tower, now Willis Tower, in Chicago, I had already been inside a taller building.

I took a picture, looking down on one of the smaller buildings that were still part of the complex. With scissors and paste, I turned that picture into the cover of a literary magazine later, in my undergraduate years. Cover of the Scream literary magazine.

In the 1990s, visiting the World Trade Center was a minor event, at a minor landmark, in a city filled with one-of-a-kind jewels. Later, it would become a symbol of a lot more. Later this week for that.

I could ride my bike with my friends across Milwaukee to get to the airport, where I could walk right up to the gate and sip a soda pop, watching planes land, and then go home on my bike again. Now, at major airports, I am stopped half a football field away from a gate.

It is impossible for me to recreate that photograph from the cover of the literary magazine, the Scream. The place I stood when I saw the world in that picture is no longer there to return to.

This week, I feel that, a lot.

It was common to think of the WTC as a monstrosity or just plain boring. I’d be curious if anyone else in Duluth has memories to share this month.

https://www.youtube.com/watch?v=grVp9SJhM98 The second video release from the new album by Moors & McCumber, featuring Superior's James Moors, is for the...