Postcard from the Alger-Smith Sawmill 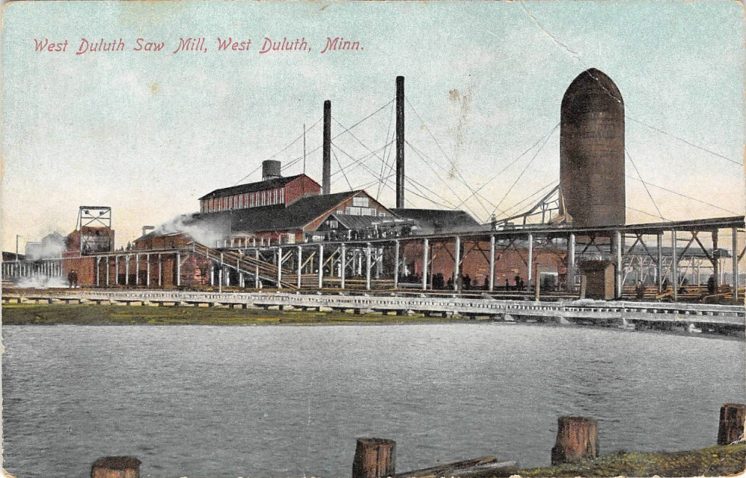 This postcard was mailed July 29, 1911. By then the Alger-Smith Sawmill in West Duluth had been dismantled following a decade-long decline in the sawmilling industry.

Anyone with a century-old garage in West Duluth likely owns scraps of the Alger-Smith mill. “There must be 100 garages in West Duluth that have been built this summer out of lumber taken during the process of dismantling,” the company’s president told the Duluth Herald in a story that appeared in the Sept. 22, 1920 edition. “Every day or two some person inquires for the lumber, and when we ask him what it is for he says, ‘A garage.’ Our lumber must have built almost all of the garages in West Duluth this summer.”

The sawmill opened in 1891 as the Mitchell & McClure mill. It was situated at roughly 51st Avenue West and Main Street, land presently occupied by the idled Verso paper mill. The name of the sender of the postcard is not clear, but the address given was 1915 W. Superior St., which was then — and remains today — the Duluth Press Building. The recipient of the card was Mrs. Newman of Chetek, Wis.

Dear Marie — We are now here at Duluth, as we got no work in Superior(?). It is much prettier here also, so I like it better. Don’t favor our place so very much but it might get better. There is quite a bit to do. After a Saturday fling with a paddle board on Superior Bay, I was smitten. Within an hour of finishing my...