Into the Dad Zone: An Epic Skate in the BWCA 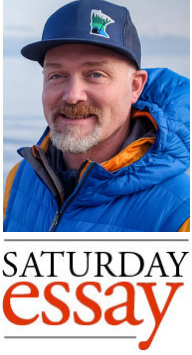 Like a lot of folks who love the outdoors I try as hard as possible to get my kid to love being outside as well. To create that connection is like walking the razor’s edge. You push too much and they hate it. You push too little and they get consumed by electronics, friends and all the other noise going on in their young lives.

I would say my actions fall on pushing the outdoors too much. I personally have come to the conclusion that I have one life to live and I am sure as hell going to live it as much as I can.

There is no question, I am happiest outside having an adventure. That has been one consistent theme in my life since I was a kid. That theme is a core part of my being and one aspect of my life I want to give to my child, it’s my legacy … and well, it’s all the legacy I have to give!

So when free time presents itself, outside is where I will be. If my wife is working and I have the kid for that time period, then we are going outside. It’s just a matter of how and where. Usually those two answers are dictated by weather, season and what the conditions will allow us to do. There is always something special to any time and season, if we are aware enough to recognize it. The BWCA in full glass.

Tae is 12 now, which is shocking to those who have known him since his adoption at 9 months old. Up until this year, when Tae and I are together I have been the unofficial director of fun.

However, in the past two months there have been several instances of Tae asking to do some adventure outside that we have either done before and he enjoyed or that he has heard about and has a curiosity about. One of the first such instances was going duck hunting. That was weird because the kid has shown almost no interest in hunting at all. But he requested giving it a try. I will never say no to a request to go outside, so we went hunting. We never saw a duck, but he loved it.

Ice skating on perfect, wild ice is another thing he was super curious about. I had seen on Thursday of last week that the ice was shaping up nicely for some Boundary Waters Canoe Area epicness. I had regaled Tae with stories from decades past of touring the BWCA on ice skates and we talked about it a lot this past summer when we were fly fishing there. Tae just could not wrap his head around the notion that he could skate anywhere. Anywhere??? The best defenders are made of stone.

I had been paying attention to the lack of snow and the ice reports. It was obvious the winter conditions were shaping up for this phenomenon; it would just be a matter of where.

Folks were already skating, but it still sounded a bit sketchy to me. I am a sucker for ice skating, especially in a pristine place like the BWCA, but when it comes to ice I am a wary soul.

I have to admit, I have two party fouls in my skating past. Both involved full submersion. Both were very real and scary, extremely cold and basically just sucked a lot!

Getting out of the water after falling in is just the first part of the challenge. Being wet in cold winter conditions is brutal. Getting out of wet clothes and getting your core warm again isn’t easy. So preparation involves not just hauling ice picks and ropes, but also a dry bag and a dry shirt or two. He shoots, he scores.

You can imagine my reluctance to drag a 12 year old into that possible outcome. That said, I also know a bit about ice travel and the tools you should have to put the odds in your favor. Done right and in the right conditions, I felt I could be a good parent.

On Friday morning, a few more social media posts went up with ice thickness reports and I realized it was safer than I first thought. It might be worth mentioning it to the kid.

When I did bring up the ice conditions to Tae I figured he might not be interested. Spirit Mountain was open and the kid is a terrain-park rat. He could sit on that high-speed tow rope and ski all day, every day. I timed my ask. I had caught a flush of crappie while ice fishing earlier in the week. I pan fried them in butter with just a wee bit of salt, then waited until he was two bites in to show him the ice reports.

It would have been all right with me if he didn’t take an interest in skating the BWCA. I was not fully sure of the safety conditions, and three-and-a-half hours away up the North Shore is a big day of driving. The lake was at the end of the road, literally. You could drive no farther north in that part of the state. There were nearly 50 cars in the parking lot, but nobody to be seen.

To my total surprise, Tae was totally in. He actually became fixated on it and was just chatty about the whole deal. I explained to him we would have to get up really early, drive a lot, stay out all day and drive home late. Due to COVID-19 there would be no staying overnight. This was an all-in grudge match if we wanted to do it.

The whole day went off without a hitch. Getting Tae up at 4 a.m. was not a huge problem. I turned off all the clocks so he had no idea when he had actually gotten up. Then I just popped him in the car and told him to go to sleep, which he did for an hour or so. He woke up just in time to see the sun come up over Lake Superior, a treat in itself. Sucking on a hot chocolate I had made for him, he admitted he had been so excited he had not slept much at all that night.

We pounded it up the shore to Grand Marais, then continued another hour up the Gunflint Trail. Then we were on the ice all day, skating and ice fishing. I put the pop-up on the ice with a heater and we used it as both a fishing spot and a warming shack. The heater kept it a comfy 60 degrees. At lunch we used the Jet Boil and made Ramen, a nice hot meal for shredding all day.

While all this was going on, I once again had the parental realization that this stuff is no longer about me anymore. I mean, yeah I love it and it will always drive me, but the fact that Tae got to experience that feeling of total freedom was what was important here.

Skating on pure, wild, perfect black ice is one of the closest things to flying you can do with two feet on the planet. It’s an effortless glide on perfect etchable glass.

Not only was the ice itself of a consistency that was incredibly smooth and clear, the lake we were on is a pristine, clearwater lake in general. Going over rocks you could see 15 feet straight down, your stomach literally dropping out as you coasted over reefs and drops to the pure black abyss. This bug is swimming on the underside of the ice.

I have to say, I was proud of Tae in making the choice to take on this adventure. It was a hard push, and I’m saying that as a person who has no issue taking on hard pushes. The skating was the fun part; the taxing element was the travel to get to it and back.

Tae made it happen, though. A perfect road trip buddy. He also reveled in the spectacle. Tae appreciated the special conditions he was able to experience.

Honestly he did better than some of my buddies who would have at the very least asked to take a bathroom break every hour, or gripe about the radio or talk politics!

If the kid keeps this up, he is going to make “Bro Brah” status by 13.