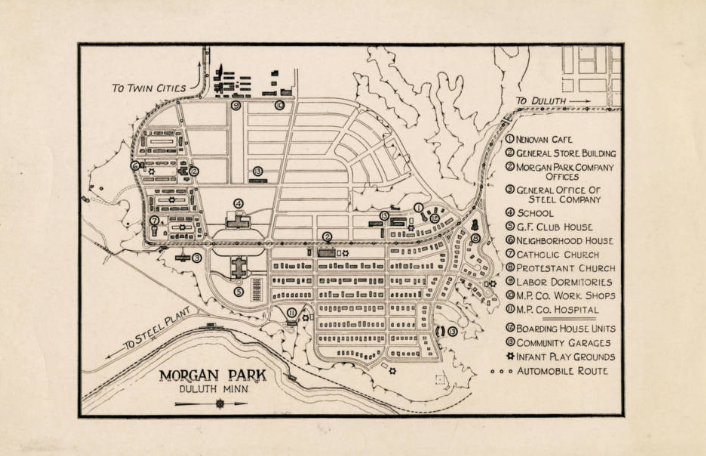 This week’s quiz is the first in an occasional series that will focus on the history of Twin Ports neighborhoods; please sound off in the comments on other neighborhoods that you’d like to see covered!

The next PDD quiz, reviewing headlines from March 2019, will be published on March 31. Please email question suggestions to Alison Moffat at [email protected] by March 27.

#1 Morgan Park was named after this steel magnate. #2 Morgan Park was designed in 1913 as a company town for employees of which company?

#3 Many of the houses and municipal buildings in Morgan Park were notable for their use of what building material?

#4 Morgan Park’s neighborhood clubhouse, constructed in 1917, was known by this name.

Morgan Park Hospital was demolished in 1934; read more about its history on Zenith City Online.

#6 The Lake View Store, constructed in 1915, is widely considered to be the first modern what?

Read more about the Lake View Store in this PDD post.

#8 In what year was the Morgan Park School demolished?

Read more about the demolition and the history of the school, built in 1916, in this PDD post.

#9 Which of the following was NOT a nickname for neighborhoods within Morgan Park?

Read more about the church’s history and its demolition in this PDD post.

https://www.youtube.com/watch?v=teUO0Aw-qVw John King returns with his 10th annual review of the finest hair styles at the Minnesota High School Hockey...