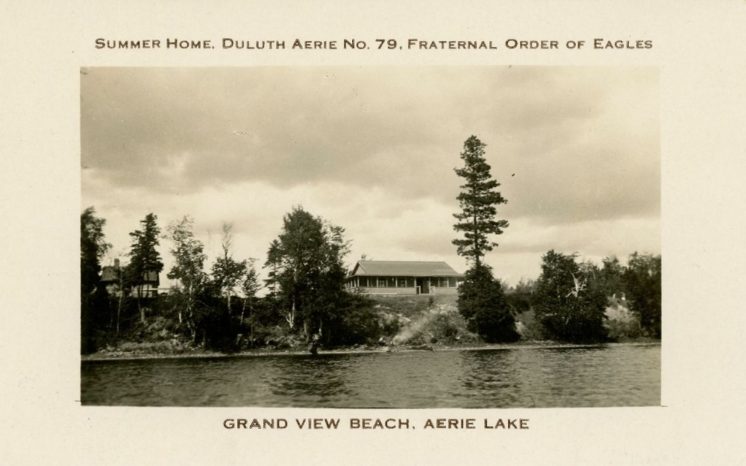 There doesn’t appear to be much information on the internet about the Duluth Eagles Club in general, much less the summer home shown on this old postcard. When were the Duluth Eagles formed? When did the club disband? Where is Grand View Beach / Aeire Lake? And where was the club’s main lodge in Duluth?

Below are a few fragments of Duluth Eagles Club history available on the web.

History of Duluth and St. Louis County, Past and Present, Volume 1, by Dwight Edwards Woodbridge and John Stone Pardee, published in 1910, has a list of fraternal orders of Duluth with this entry:

DULUTH, Minn. (AP) — A three-story brick building housing the Eagles Club in downtown Duluth was destroyed by fire early today. A night watchman told firemen he heard a “loud boom,” in the basement about 3:30 a.m. Investigating, he discovered the flames. No estimate of damage was available.

Defendant was charged with breaking and entering the Duluth Eagles Club in the early hours of June 9, 1968, and robbing the janitor of a wallet containing $40. On the day following the offense, defendant was arrested. The janitor’s wallet was found on defendant’s person. The janitor identified defendant as his assailant, and defendant’s fingerprints were taken from a glass and bottle at the scene of the crime. Donated by FOE: 1957
Current Location: Downtown Lakewalk, Canal Park Dr. at the intersection of Buchanan St. (On private property.)
Original Location: Duluth City Hall. Removed May 2004 as a result of litigation.
Scroll: “Presented To / The City Of Duluth / By / Fraternal Order Of Eagles / Aerie No. 79”
Litigation: American Civil Liberties Union (ACLU) of Minnesota filed a lawsuit on February 27 or 28 after weeks of negotiations with the city. The MCLU attorney stated that the monument “excludes those people who don’t believe in the Ten Commandments.”

Duluth has dozens of spectacular waterfront properties with amazing Lake Superior views but only one home has a front porch...