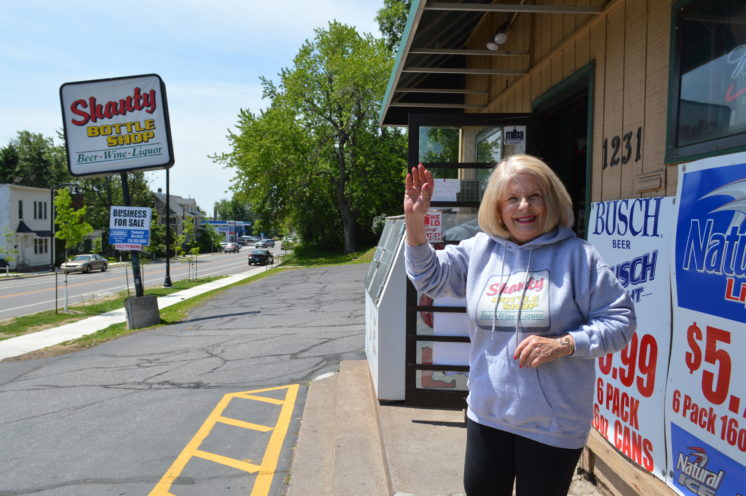 Shanty Bottle Shop owner Pam Crotty waves goodbye outside the front door of her business. Crotty has sold the store after nearly four decades in beer, wine and liquor sales.

Shanty Bottle Shop owner Pam Crotty said she has sold the neighborhood liquor store at 1231 E. Fourth St. and plans to retire after nearly four decades in the business. The undisclosed new owners will take over the space after a July closing and plan to continue liquor sale operations.

“I’ve had a lot of good memories here, it’s going to be a sad day for me but it’s time,” Crotty said. “It’s time for me to go to Florida for the winter.”

Crotty, 73, worked for her father Robert Nordstrom after he opened the Red Carpet Bottle House on Miller Trunk Highway in 1972. The fast-food chain Wendy’s purchased the property and developed a new restaurant on the site in 1982. Nordstrom then moved his business to the East Hillside neighborhood, into a space that served as the original House of Donuts.

Soon after purchasing the property her father built an addition and added coolers to double sales capacity.

“(The House of Donuts) was tiny,” said Crotty. “There couldn’t have been any room in the place.” The Shanty Bottle Shop opened in 1982 in the original E. Fourth Street location of the legendary House of Donuts.

The legendary 24-hour donut and sandwich shop, which was established in the mid-1970s, opened a second location at 624 E. Fourth St. where it remained until going out of business in 2005. The property is now home to the Whole Foods Co-op.

Nordstrom turned the Shanty Bottle Shop completely over to his daughter in 2000 and he died in 2004.

Crotty said her four children all worked at the Shanty while they were growing up. “It’s been a good family business for us. We’ve had four generations work here over the years,” she said. “The last one, a grandson, just graduated from college this spring.”

A cat named Tequila was also part of the family. The cat served as a store mascot throughout the 1990s.

“She didn’t drink (tequila), she broke a couple bottles of it through,” said Crotty. “Everybody knew that cat.”

Strong neighborhood support has been a key to store longevity, she said. For example, a recent Fourth Street reconstruction project limited neighborhood traffic but sales impact was minimal.

“We really have a great location,” said Crotty. “We have huge walk-in traffic from the neighborhood. They’re the ones that got us through it, people in the neighborhood could still walk here.”

Lake Aire Bottle Shoppe Manager Mark Nachtsheim called Crotty “one of the nicest ladies you’ll ever meet” and said the Shanty Bottle Shop has had a remarkable run.

“The business is changed drastically over the years,” he said. “There’s so much more variety than there was five, six or seven years ago. It’s just changing all the time.”

Nachtsheim sold product to Duluth area liquor stores for 20 years and has managed the London Road business for the past three. He said the beer industry was dominated by 15 or 20 brands for decades but craft beers have become popular. Now 500 beer brands fight for shelf space as craft spirit production is developing and new wines flood the market every week.

“She’s run a good business for a long time,” he said. “It’s not getting any easier, it’s only getting more difficult. The Mount Royal bottle shop has gotten bigger and Super One has their store. Obviously, there’s a lot of competition.”

As Crotty posed for a picture outside her store last week, a customer stopped his car in the parking lot. “You’re selling the Shanty?” he asked, through an open window.

“That’s great!” said the customer. “I hope you can move to Florida with all the money you’re going to make.”

Yes, Crotty is on her way to Florida, but only for the winters.

Where in Duluth? PDD 15th Anniversary Challenge #6 of 15