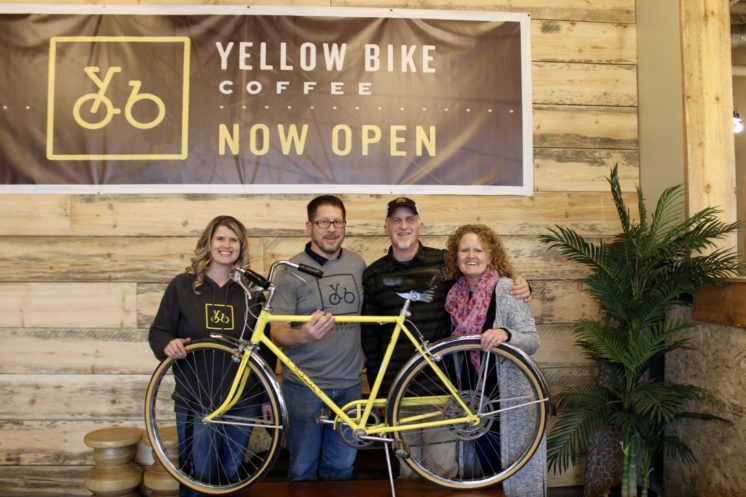 In a swift transition of ownership, the two-year-old Pelican Coffee closed Nov. 12 and the new Yellow Bike Coffee opened Nov. 13. There wasn’t a day without caffeination at 5094 Miller Trunk Highway in Hermantown.

The owners of the new shop are: Doug Olsen, an engineer; Kim Olsen, a counselor; and Shannon Tanski Cornelius, a business developer. While this might seem like an unlikely cast, Cornelius says members of the development team have complementary skill sets.

Pelican Coffee was run in partnership with Praying Pelican Missions, a nonprofit that facilitates international missions. It devoted half of its profits to local and international charitable causes. Owner Matt Pfingsten and his family moved to Florida to continue their missionary work. He notes in an email that the coffee shop was successful and served as a wonderful connecting point for the local community but it required significant, daily oversight and management.

“As the reach of Praying Pelican Missions continues to grow, the need to simplify has become a priority for us,” says Pfingsten. “This led to the transition from Pelican Coffee to Yellow Bike Coffee and its excellent, locally based ownership and management with a similar heart to Pelican Coffee.”

While Yellow Bike isn’t tied to an organization funding missionary trips, Doug Olsen says the owners see the shop as an investment in the Hermantown community and they intend to continue using it as a venue for fostering community building.

The Yellow Bike brand is focused around the idea that bikes and coffee are universal. Most people drink coffee. And learning to ride a bike could be an analogy for life. “We all remember learning to ride a bike, it’s a milestone in life,” explains Cornelius. “If you fall down, you just pick yourself up and keep going. We’re here to fuel your next adventure.”

The shop has already undergone some dramatic changes. According to Olsen, he pulled his first all-nighter since college last week to knock out a portion of the wall and open the space up to the adjoining suite, which had been office space and also served as home to Do North Pizza from 2007 to 2016.

The enlarged space features ample windows and natural light. The décor will transition from the Pelican’s tropical theme to a more contemporary vibe. A back wall has been lined with reclaimed wood. There are plans for modular booths and tables that can be configured to provide a bit of privacy. The proprietors hope to find a new home for the aquarium and its residents.

In a thoughtful show of support consistent with the rebrand, Bob Swanstrom, sometimes referred to as the “patriarch of Hermantown,” recently gifted the shop a vintage yellow Schwinn, which is on display.

Joel Graff, who has worked in hospitality for years and previously managed the Original Coney Island, has been hired as general manager. He expects the shop to serve as a hub for Hermantown. Yellow Bike’s food menu, which the owners dubbed “business artisan,” includes fresh ingredients sourced locally whenever possible. The menu was largely inherited from Pelican Coffee, but employees have been experimenting with some new options too.

The shop opens at 6 a.m. and serves what it calls the best breakfast burrito in town as well as pastries, breakfast sandwiches and skillets. Later in the day, sandwiches, paninis, soups and specialty flatbreads are on offer. Vegan and gluten-free options are available too.

The shop will offer box lunches and cater to businesspeople and those working remotely. It will soon offer fiber internet with both an open network and a more secure server for people who need to transmit sensitive business documents. A reservable conference and meeting room are in the works as well.

“What sets us apart as a coffee shop is we’re responding to the needs of the business community,” says Cornelius.

Those who care for small children will appreciate that Yellow Bike is designing a 300-sq.-ft. play area for kids. A small room in the back of the shop with armchairs and toys has been popular with moms, dads, grandparents and nannies. Kim Olsen says the need for a larger child-friendly space with a door that closes has become apparent as customers are often vying for a spot in that room.

Right now, Yellow Bike is open 6 a.m. to 6 p.m. every day except Sunday. They’re working on licensing to be able to serve wine and beer. Once that happens, they’ll stay open later on weekend nights and host family-friendly, live music events.

A jazz band is already lined up for Dec. 22. The shop will hold a grand opening with festivities in the first week of February.

So far, the community has responded positively to the change in ownership. “The regular customer base hasn’t changed much but we’ve seen a lot of new people,” says Doug Olsen. It's that time of year again: the lights are twinkling, the tourists are flocking, and "Christmas City" plays on a...