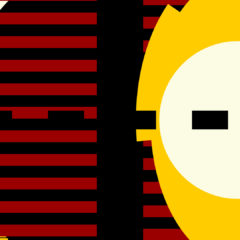 Destroy the binaries. That was the phrase echoing in mind after considering Kathy McTavish’s new site-specific installation, Chance, at the Tweed Museum. McTavish is a cellist and media composer who works in the often underrepresented world of multichannel video and sound environments, or digital, code-driven works of art. She uses layered, interchanged information in order to “create cross-sensory, polyphonic landscapes,” combining digital elements of animated video patterns and sound in a kind of seismic virtual collage.

Upon entering the gallery, I was immediately taken to another plane. Undulating sounds swirled through the air, overtaking me with their veracity as I felt sorrowful, elated, crestfallen, and joyful, all at once. It was a tumultuous mix of feelings; both comforting and unsettling. The sounds alone were enough to create a sense of something alien and yet intimately familiar, and then there were the images to consider. A series of computer monitors sat before me in an array reminiscent of a control chamber from Stanley Kubrick’s film, Dr. Strangelove. It was as if I’d stumbled into a secret bunker in an underground cavern that had been abandoned by its operators, left alone to control the world’s flow of information. The images on those monitors were filled with McTavish’s characteristic blend of shapes and colors careening through the digi-sphere, and during my encounter, her whirling video-scapes conveyed a strong sense of the sublime through their use of expanding movement.

With Chance, McTavish has used the space inside Sax Gallery to great effect. Her installation, taken as a whole, evokes a dystopic vision that brought to mind author Nalo Hopkinson’s short story, Message in a Bottle, which used the sci-fi archetype of time travel as a way to question false links between childhood and innocence. McTavish’s installation works on a similar level, reconfiguring our senses for the current era, seeking to dismantle false binaries between “nature” and “human-made culture.” Chance puts those old distinctions to rest as they no longer offer a useful account of existence or our place in its endless expanse.

This is ultimately what drew me into McTavish’s installation: She is using the apparatus of new media as a framework to call us out of our complacency. By incorporating a continuously changing data stream, Chance provokes us to recognize the ever-evolving diversity of experience, both human and non-human. As such, it’s a profoundly post-humanist installation that disregards the modernist myth of categorical differences between human beings, non-human beings, and everything else that exists. McTavish’s installation is challenging us to embrace our collectivity, while staring headlong into the void that is our unknown future.

Chance is currently installed at the Sax Gallery in the Tweed Museum of Art in Duluth.

Duluth is the only metropolitan statistical area in Minnesota to see its gross domestic product decline in 2015 and 2016....