Multimedia artist and digital art professor Joellyn Rock has been combining traditional graphic art techniques, classical imagery and storytelling, and video and digital technology to create animations, interactive installations and other experiments. Her art takes advantage of and blends quickly evolving technical opportunities, and her curiosity draws her into constant new challenges.

J.R.: My creative medium has shifted dramatically over the years, evolving from traditional art forms like painting, drawing and ceramics to digital media formats such as web narrative, experimental video and interactive installation. One thread of continuity: I seek new ways to tell old tales. I often borrow from fairy tales and mythology, choosing to update an old story with social commentary or a revisionist spin. For me, old tales provide an anchor when working in digital media, offering the viewer a cozy narrative, reinvented for the distress of our digital age. I use a visual vocabulary that harkens back to the storytelling on ancient pottery or vintage children’s books … graphic compositions, intense colors, set off by crisp silhouettes of characters in action. Those familiar forms get remixed, layered with historical references or contemporary ephemera, juxtaposing ancient story with modern dilemma, part comfortingly old-school, part shock of the new. I am fascinated by how emerging media is changing the ways that stories can be told. Sometimes it is the leap to a new technology or the invention of an alternative use for emerging media that provides a starting point. I do seem to be happiest when stretching into unknown territory, finding my way with new tools and make-shift methods, but always in search of the visual story. A digital art professor at University of Minnesota Duluth, I joined an interdisciplinary team to establish our new Motion and Media Across Disciplines Lab. The MMAD Lab is a wonderful space for faculty research in digital video, motion capture, and collaborative experiments using new media platforms. This resource has already opened up new ways of working, evident in collaborative projects like Fishnetstockings, experimental video for performances like Remixing Shakespeare, and outreach to community through video workshops for cancer survivors with Project Lulu. The interactive installation Fishnetstockings was inspired by myriad mermaid stories, especially that famous one by Hans Christian Andersen. This digital version invites you to engage with the well-worn tale in surprising ways. A layered mix of digital video, text, silhouettes, and cutout elements offers multiple modes for the viewer to play in the story. You can step into the projections to interact with fish, ships, nets, and hybrid sea creatures that float through the space. You can use your mobile device to generate alternate versions of the narrative, adding story fragments and poetic musings to the text crawl. The work was created in collaboration with computer scientists Pete Willemsen and Logan Sales, who programmed the interactive code, using Processing with a Kinect for motion interactivity and multi-layered projection. Visual artists Alison Aune and Kirsten Aune created beautiful paper-cuts and patterns that I remixed into the video backgrounds, lending their Scandinavian design and folk art aesthetic to this high tech work. In the videos, I use a combinatory creative process, mashing-up historical references, folk patterns, and chromakey silhouettes with many layers of background video. The remixed videos feature improvised story vignettes by three virtual mermaids: Linnéa Ilene Hinkel, Mary Rebekah Myers, and Henriette Söderlind. Their creative movements were captured in the UMD Motion and Media Across Disciplines Lab, in the campus swimming pool, and in the sunrise on Lake Superior. Many others contributed creative elements to this collaborative work which premiered in Bergen Norway in August 2015. Credits for the full collaborative crew on Fishnetstockings website. 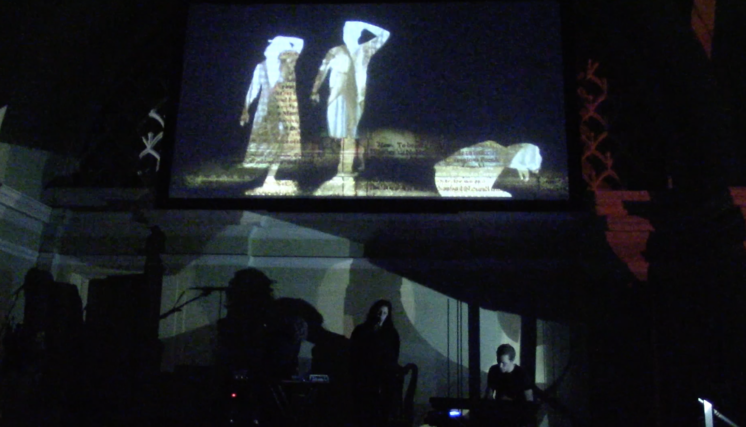 Remixing Shakespeare was a live performance event staged last year at Karpeles Manuscript Museum in partnership with The Folger Shakespeare Library, University of Minnesota Duluth, and KUMD radio. In honor of the national tour of Shakespeare’s First Folio, Alan Sparhawk created original music to accompany early silent film adaptations of Shakespeare. Low improvised the live score to the night of video projections. I was invited to concoct additional experimental video that could play-off the well-known literary content and work with Low’s haunting sound. For the October event, it seemed fun to dive into the storms, shipwrecks, witches, and other spooky elements found in those age-old stories. While creating the remix projections, I worked with dancer Rebecca Katz Harwood who improvised and choreographed Shakespeare story vignettes in the MMADlab chromakey studio. By using the green screen, I was able to “key out” the dancers, layering their bodies with book textures and historical references, borrowing from the material culture of the Folger Library’s collection and riffing on Shakespearean themes. The Karpeles architectural space was awash with rhythmically overlapping video, projected onto the ceiling and walls, programmed for the event by multimedia genius Kathy McTavish. Rumor has it that documentation of the multimedia event will eventually become part of the Folger Shakespeare Library’s vault, archived for future generations to revisit.

Project Lulu
Recently, I have been interested in using my work with digital media to connect with community in various ways. My work with Arts Express Workshops for Cancer Survivors was inspired and encouraged by local artist/writer/dancer, Lisa McKhann, and her non-profit, Project Lulu. For the past five years, Project Lulu has been doing important work, honoring the healing process, holding creative workshops in support of cancer survivors as they express their experiences through reflective writing, creative movement, and visual art-making. Project Lulu provided an umbrella for me to contribute too, adding the option of workshops in digital media. Over several workshop sessions at UMD, we have been able to give participants access to the tools to combine their own writing, visual art, and creative movement into a work of experimental video. Storytelling is at the heart of this process, giving participants the space to explore new modes of expression and a supportive environment to do it in. I love that digital media affords me the opportunity of collaborating with creative writers, artists, and programmers in other parts of the country, and to share that work with an international audience. SALT IMMORTAL SEA is an interactive game/narrative and installation created with California-based writer Mark Marino and computer scientist John Murray. Marino and Murray invited me to design visual assets for the story/game/installation, with digital prints on fabric made possible through the Viz/Lab at University of Minnesota Duluth. SALT IMMORTAL SEA, reboots the tale of Odysseus, this time in dialog with the current refugee crisis. The playable story places the interactor in the position of the refugee. As the tale opens, an explosion sends the interactor from the comfort of a ship into the salt immortal sea. Rescued by a mysterious boat the player encounters eight other passengers, drawn from the present and the ancient past.

The Mysteries
When an ancient tale draws me in, its characters or motifs may have surprising contemporary echoes. Case in point: the sexual harassment scandals of today and the Greek myth of Persephone. The Mysteries Project retells this ancient story via emerging media. The mockumentary story is told through fragments: location photos, production stills, design sketches, storyboards, and video clips. The Mysteries plays with the boundaries between fact and fiction, artifice and authenticity. It revisits of the myth of Persephone, her mother Demeter, and the Eleusinian Mysteries, (secret religious rites celebrated in ancient Greece). Hybridity (a mixing of artistic techniques and media) and distribution (the extension of the work across media platforms) are key components. The collaborative film and digital storytelling project has occupied me over multiple years. One of the joys of being part of Duluth’s generous creative community is the wealth of local talent willing to improvise and invent new art forms together. The Mysteries features actors Cathy Podeszwa, Jean Sramek, Christa Shultz, Gary Kruchowski, Jamie Harvie, Emma Harvie, Cheryl Skafte, and Rob Wittig among others. I would love to do a public screening of The Mysteries sometime next year, its complexity in form and creative work-flow has been … humbling. Working creatively with digital media provides a gazillion challenges and rewards. Whether I am dragging around cameras and cajoling costumed actors on a windy beach, or up all night editing psychedelic videos till my eyes roll … I am happily exhausted by the challenges. I relish the liberation of beginner’s status with a new medium. But I also take pleasure in honing my craft as I gain confidence with complex tools. Yep. Doing the work is the real reward. I feel very grateful to get to have this creative life. Sure, It’s not always clear how to share a work that doesn’t fit neatly into a traditional art format or genre. And with the multiplicity of digital media, it’s not always clear when the work is done!

(Is this done yet…? Oh…Let me try it just one more time…)
When in doubt? Mix, mix, and remix again!

Coyote – “Quicksand” (Live from Studio A)

https://www.youtube.com/watch?v=un1vizB2ZhE&t=2s Duluth musicians Jerree Small and Marc Gartman have been making acoustic music as Coyote for a decade. In this...