Coffee and … beer? In Lakeside? 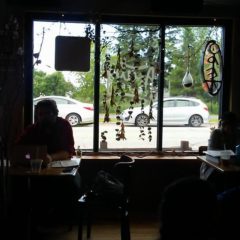 Last week I bicycled to Duluth’s Lakeside neighborhood with a friend — to Amity Coffee and BEER?

That’s right, the first place in Lakeside to sell beer is a coffee shop that closes (on most nights) at 5pm. I can’t start drinking before 5 unless I am home alone. (Then, it’s always 5pm somewhere.)

Seriously, though — I’m not used to finding beer in Lakeside, and I’m excited to see it at a place that brings live music and local art. And it gives so many (like, several dozen people in the short time I was there Wednesday afternoon) a place to chat and enjoy each other’s company in Lakeside. Pictures of this cool coffee shop below.

Kudos to the friendly staff working last Wednesday, too. What other places in Lakeside are or soon will be serving alcohol? Perfect Duluth Day reported in early May that a new musical play written and directed by Conor McPherson with music...