The 2016 Homegrown Kickball Classic at Chester Bowl Park was ushered in by shockingly perfect weather conditions. The sun shone, some random dude played sitar, dogs pranced, beer flowed. And musicians in their seventh day of an eight-day Homegrown bender attempted to rally and act like athletes. Unlike the well-timed Homegrown music schedule, the game was scheduled for noon but the opening pitch happened closer to 1 p.m. Bleary-eyed stragglers stumbled onto the field in Friday’s clothes while Friday Rawkers Coach Heiko Edwardson and Saturday Rollers Coach Paul Lundgren did their best to rouse new team members.

Game strategy was nearly nonexistent. “I’ve actually given the game absolutely no forethought whatsoever, which is completely in line with the past 16 years,” said Lundgren. When Edwardson was asked about his strategy, he said “To beat him,” pointing to Lundgren. “I also intend to yell a lot.” The yelling started soon after when Edwardson noticed someone had already tapped into the Jameson he intended to bust out for the seventh-inning stretch. 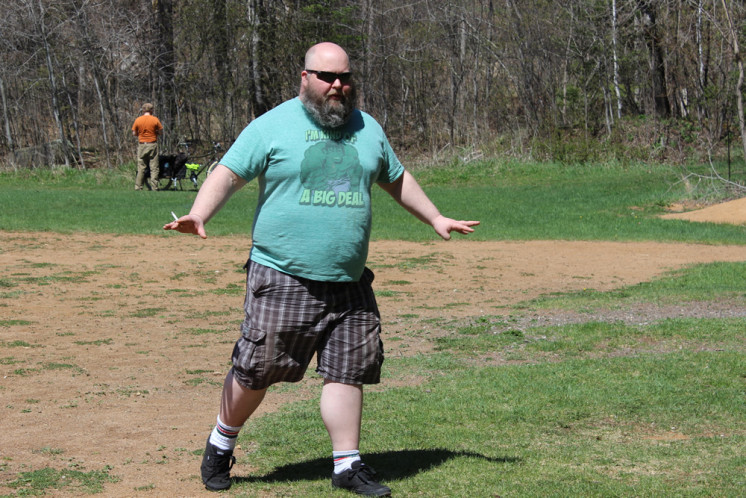 The game started out slowly as the obviously hungover struggled to multitask. Several balanced a beer in one hand and a cigarette in the other while attempting to stay alert. Ryan Nelson donned his nefarious “half-shirt,” despite Mayor Emily Larson’s warning and tried to boost his team members’ morale by encouraging them to get their heads out of their asses. The Rollers were the first on the scoreboard with six kickers in a row reaching base and three of them scoring in the top of the second inning. Derek Delgado led off with a bunt single, but was out on the next play when Jason Ratajek reached on a fielder’s choice. Then Ian Vincent, Ben Tryon and Ken Nyberg all kicked singles, with Ratajek, Vincent and Tryon scoring to give Saturday an early 3-0 lead. The Rawkers struck back in bottom of the fourth inning. Tony Derrick reached on Chris LeBlanc’s fielding error to start off the inning, then Chad Lyons sent a booming kick over the various shallow-playing left fielders’ heads. They clumsily bumbled into each other in an attempt to chase down the ball, then began to relay it home by kicking it, a method that allowed Lyons ample time to round the bases for a home run. Laboring across home base, Lyons gasped, “Somebody bring me the oxygen!”

After the two-run homer, a guy in an aqua-colored shirt who said his name was George kicked a double and scored when Ned Netzel reached on a fielder’s choice. That evened the game at 3-3.

Ninety-nine percent of spectators didn’t have a clue what the score was. Most were preoccupied with their beverages and canines. “It’s all about the dogs, anyway,” said Andy Miller. At least one member of the Iron Range Outlaw Brigade succumbed to heatstroke (or more likely the whiskey flu). Another pulled a hamstring while attempting to run bases. Both team’s put runners in scoring position in the fourth inning, but failed to convert. The Rawkers threatened again in the sixth, but Scott Lunt held on to an initially bobbled catch to keep the score tied.

Lyons rolled a series of bad pitches to Lunt and there was lengthy intermission in the middle of it that involved dusting off home plate and an awkward bro hug. The weird interlude was fruitful, it yielded a decent pitch. But after Lunt made contact, Jon Choi caught the ball as some random heckler screamed, “Happy birthday, Starfire!” 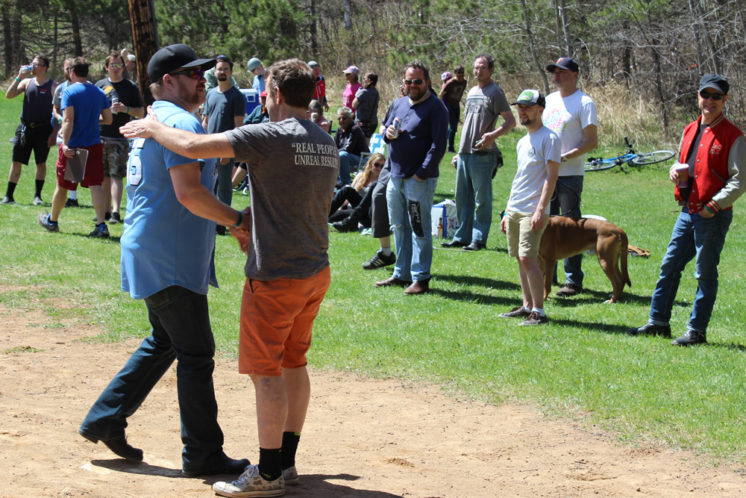 In a notable act of team spirit, the Rollers assembled themselves into a human pyramid during the seventh-inning stretch. Surprisingly, nobody got hurt during the delicate balancing act. Meanwhile, the Rawkers pumped themselves up with shots of whiskey. The Rollers had runners on first and second base with one out in the seventh thanks to fielding blunders by Lyons and Leon Rorhbaugh, but the steady-handed farmer Brad Fernholz executed an unassisted double play at second base to end the inning.

The Rawkers got their game-winning runs in the eighth inning. A guy in a grey cap led off with a bunt single, and was later driven in by Alex Piazza. After Ryan Van Slooten flew out, Jon Choi singled to drive home Piazza for the last score of the game. The Rollers went down 1-2-3 in the ninth, and that was all she wrote. The Friday Rawkers prevailed with a final score of 5-3, celebrated by the usual belligerent chanting geared toward belittling the Saturday team. 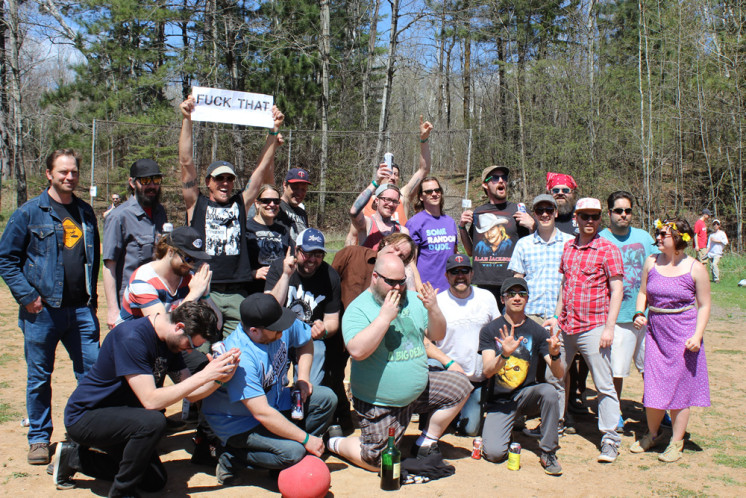 Lyons was named MVP for the second year in a row (despite his lackluster pitching performance) for his home run. Jerree Small was voted LVP since she’s forsaken her team and is off gallivanting in Bulgaria.

The Rollers lead the all-time series, having won nine of 17 Homegrown kickball games, a record bloated by seven straight wins from 2000 to 2006. The Rawkers have the hot streak, however, with eight wins in the past 10 games. Here’s a video of the entire affair, from a camera mounted on the backstop by Bryan Johnson:

From the Duluth Public Library Reference News and Resources blog, [email protected]: As World War II continued into 1943, some U.S....