As a cold wind blew heavy gusts across Observation Hill, Homegrown musicians representing the Friday-night bands blew their game-long lead, losing the 2014 Homegrown Kickball Classic to the Saturday team in extra innings by a score of 6-4.

That’s one version of the story, at least. By the time it was over, no one seemed to truly understand what happened out there.

For the second year in a row, cruel and unusual weather conditions forced the kickball game away from its traditional location at Chester Bowl Park. The alternate venue, a shabby baseball field at Observation Park, had its fair share of environmental hazards, including a 20-foot-wide, ankle-deep mud puddle in between third base and home plate. If anyone was going to score, they were going to have to pay the price. A tricky double play by the Friday team ended the top of the first with no scoring for Saturday. Friday then took its first turn at the plate, and after a few whiffs and a few kicks, a pop fly to right field gave Heather Dean the chance to score. With a light-footed tip-toe across the puddle, Dean was the first over the plate, putting Friday up 1-0.

The wind was blowing hard, making it difficult for any kicker to get the ball past second base. Every pop fly was met with resistance, which gave the ball enough extra hang-time for someone to easily get under it. The road to third base was not well traveled.

By the top of the third, and by sheer force of will, Saturday was able to squeak in a run, tying the game up at 1-1.

Saturday threatened again in the fourth, but Friday pitcher Chad Lyons made a diving catch on a line-drive kick by Nyanyika Banda to end the inning, stranding two Saturday runners and finally putting some mud on Lyons’ bright-white Kenny Powers jersey.

“I told you I’m good at sports,” Lyons yelled.

Friday took the momentum from that clutch play and went up by another run, ending the fourth inning at 2-1.

“We’re not chanting nearly as much as them,” said Saturday kickballer Anders Lundahl. “I think that might have something to do with their early lead.”

After a few scoreless innings, tensions between the two teams began to heat up. The bottom of the seventh ended with Lyons making a mad dash to first, slipping on some mud, spilling his beer, and getting tagged out as he attempted to army crawl the rest of the way. 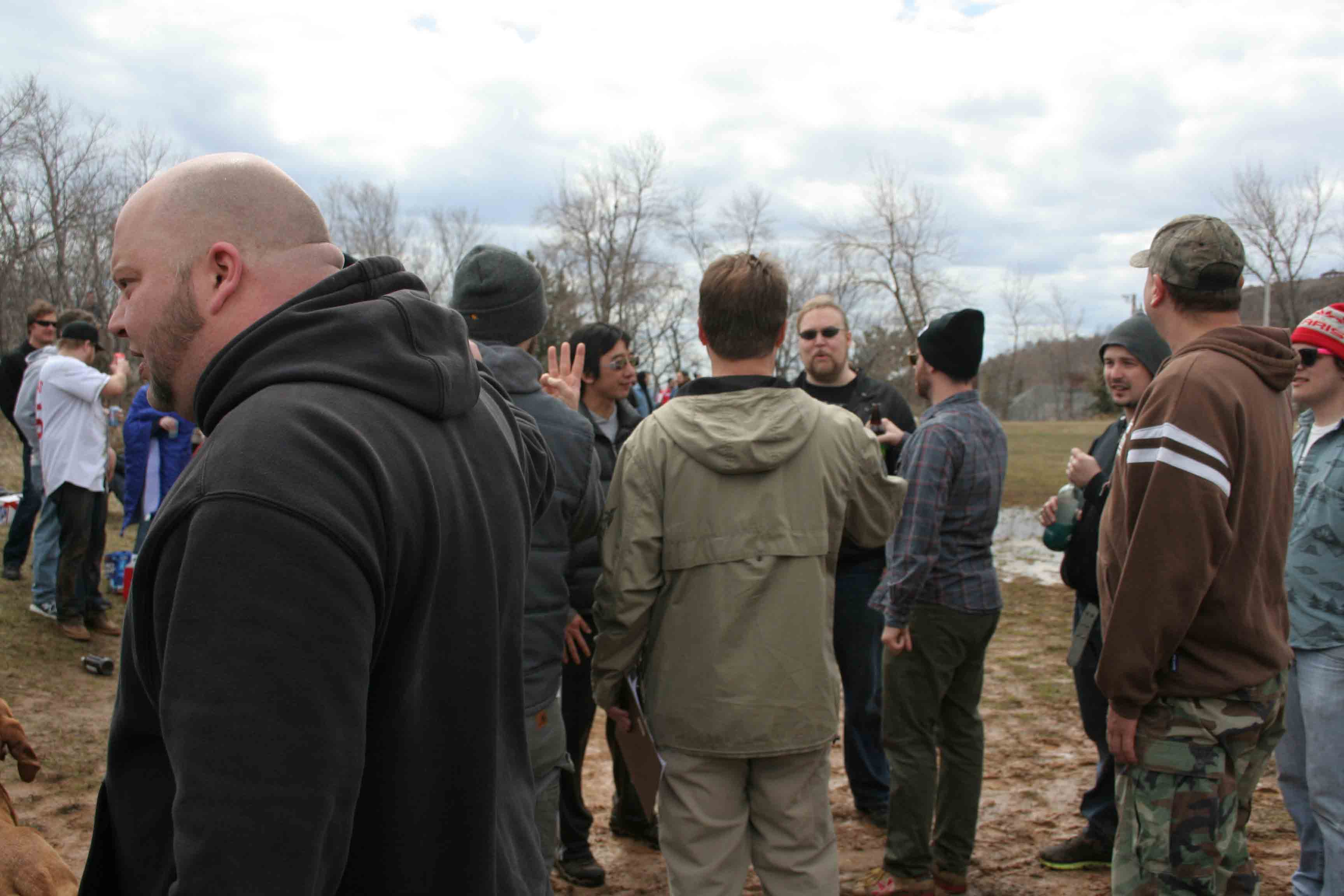 It was in the eighth when all semblance of order began to break down. In the top of the inning an argument ensued over whether Saturday player Lane Prekker had properly tagged up on a fly ball that advanced him to third base. After the teams exchanged angry words, umpire Rick Boo ruled Prekker was safe. Moments later, Prekker was tagged out at third while scrambling back after failing to tag up following another flyout.

The score remained 2-1 going into the bottom of the eighth. Heated arguments seemed to follow every play from that point on, and it quickly became impossible to tell who was on what base, who was keeping score, and who exactly was in charge of this thing.

Friday scored another run, which was met with more contesting from Saturday. While that argument was being settled, the game continued on in the background. Friday scored again, probably, we think, who knows? By the end of the inning, the official agreement by most on the field was that Friday led 4-1.

It was the top of the ninth, and things were looking bleak for Saturday. It would be the team’s last chance to catch up or accept defeat. They scored one run rather quickly, which put them within two to tie it up.

With two people on base and ready to go, a pop fly was launched into right field. In the melee to get the ball to home plate Saturday scored another run. As errors piled up in the Friday outfield, Saturday’s Jacob Swanson made a break for home and tied the game up at 4-4.

The same game that Friday led for nine innings was now headed into the extras. The mass chaos that started in the eighth never quite settled down, and every play was met with contesting from the opposite side.

In the top of the 10th, a soft kick off to the right gave the Saturday team enough time to get two runs in, giving them their first lead of the game at 6-4.

Friday would need two more points to get back into a position to win. They would have no such luck in the bottom on the 10th. Three quick outs at first ended the game. “Karma. Pure karma,” Saturday pitcher Bryan “Lefty” Johnson said of his team’s unlikely win. “This is probably going to be a notorious victory. There were a lot of crappy calls, but you have to have those crappy calls or else it’s not a Homegrown kickball game.”

“It was a good game,” said Lyons. “Then there was a collapse. People started resting on their Laurels and Hardys, and when you do that, sometimes Saturday sneaks one out.” “I’m not really sure what happened,” said Saturday coach Paul Lundgren. “I know that somewhere around the eighth inning, we were behind. Then chaos ensued. Somehow, by the end, Saturday decided to win.”

https://www.youtube.com/watch?v=ZJuN9Qcd5nM Duluth's own father of sex, Fred Tyson, presented his Sex Workshop Friday night during Homegrown at the Rex Bar....