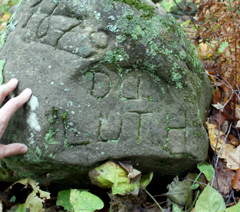 A stone that bears the marking “Du Luth 1679” has been found in Pine County, one hour southwest of Duluth. A prominent geologist says the discovery could be one of the oldest carved artifacts ever found in Minnesota, potentially carved by the French explorer Daniel de Gresolon, the Sieur du Lhut.

History texts indicate Gresolon landed his canoe on Minnesota Point on June 27, 1679, with the mission to meet with natives and persuade them to trade fur with the French instead of the British. Five days later he took possession, in the name of the King of France, of the Dakota territories at the village of Izatys, attaching the coat of arms of King Louis XIV to a tree on the shore of Mille Lacs Lake, just west of Pine County.

April Fool? Well, yes and no.

The paragraph about the Sieur du Lhut arriving in Minnesota and traveling to Mille Lacs Lake is true, at least to the degree of certainty one can have about things that happened more than 300 years ago. Also, Scott Wolter is a real person who claims to be a forensic geologist educated at the University of Minnesota Duluth. He hosted the television show America Unearthed, which aired on the History Channel’s second network, H2, from 2012 to 2015.

Wolters credentials, however, have come into question on at least one website.

What’s the deal with the stone? The image at the top of this story was emailed to me two years ago — ironically on April Fools Day, so how could I forget? — by Will Yates, a writer/producer of America Unearthed. He asked if I would appear on the program “to discuss the stone, a little very basic Duluth history and respond to some of (Wolter’s) theories.” I told him I would. He said they’d be in Duluth in July. I never heard from him again.

This morning I called Committee Films, the Minneapolis-based production company that produced America Unearthed. Jen Blanck, the company’s librarian, told me Yates is no longer employed there, but is still in contact, so she would let him know I called.

I thought the story of the Du Luth Stone had never made it out, but this morning a Google search turned up this image of Yates: … and these images of Wolters and historian Tom Backerud: 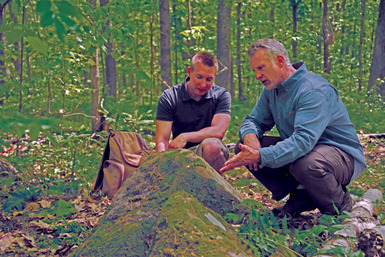 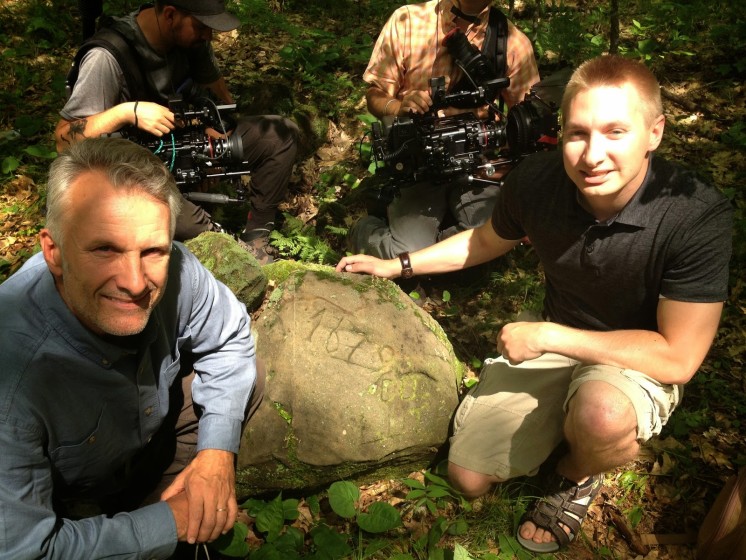 Of course, the star of this episode is the amazing and absolutely authentic Du Luth Stone that was actually brought to my attention several years ago by local residents who asked me to keep it quiet. Their reasoning was they didn’t want the public to know for fear of someone defacing or stealing it. The other reason is the landowners wanted to keep it quiet for both security and privacy reasons. I kept my end of the bargain until a couple of years ago when they allowed me to publish my weathering study in my latest book, “Akhenaten to the Founding Fathers: Mysteries of the Hooked X”, (pages 72-79). Note: If anyone is interested in a pdf version of my full report just send me an email and I’ll forward it.

Historian Tom Backerud was impressed enough with the inscription and felt it was very important to not just Minnesota history, but North American history. Strangely, the Minnesota Historical Society’s current position is they, “don’t believe it’s real because they don’t think he (Du Luth) was in that area.” This is truly mind-boggling as it is well documented that he was in the area. Further, the MHS haven’t even taken the time to look at the inscribed boulder. And people wonder why I get frustrated with academia and certain institutions. Even the harshest skeptics will find this attitude hard to defend. We’re hoping to find a permanent home for the artifact that is very important to the early history of Minnesota. Call me bias, but I think the City of Duluth would be appropriate.

I asked Blanck if America Unearthed had been officially cancelled. “It’s kind of just in limbo,” she said. “All I know is that we are not in production right now for it.”

I was fortunate to spend my first Arrowhead New Years Eve in a cabin in Jay Cooke State Park; bird...