Upper Chester: Not so fast there people! 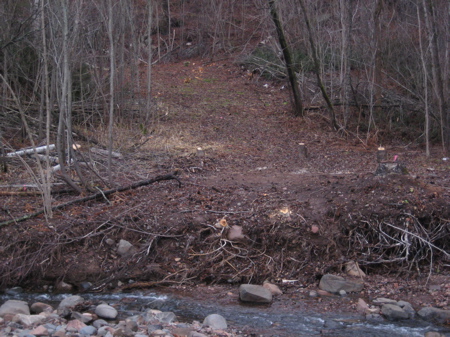 Duluth took a beating this past year. But thanks to everyone pulling together we’ve made a remarkable comeback. For proof, you don’t have to look any further than Chester Park. Thanks to the indefatigable Dan Proctor and others the Lower Chester trails are probably in better shape than they were before the floods of June, and that’s saying a lot considering the scope of the mudflows and washouts that ravaged pretty much every inch of the ravine.

Upper Chester, however, is another story. Despite good intentions, there’s been a lot of jumping the gun to clean up or improve things that one could make the argument has ended up doing more harm than good. I’m not going to run down the list, but the latest chapter seems to have taken place largely under the radar, and I think it deserves a public airing.

I’m talking about what the City of Duluth and the St. Scholastica Ski Team are calling the “Chester Ski Trail Reroute.” In an email I received last month these folks put out a call for volunteers to help “cut trees and brush to reroute the ski trail in Chester Park.” It was work they described as “necessary due to damage caused to the trails by the June flash flood.” Just the words “cut trees” should have been enough to set off alarm bells after the Great Chester Trout Stream Deforestation debacle of last summer (I know, I know, I said I wouldn’t run down the list). But I thought no way will that happen again. Well, apparently it has. Just beyond the washed out bridge at the soccer field the CSS Ski Team has clear-cut a monster swath up the hillside to create a bizarre double dogleg that has even other local skiers scratching their heads about what the f**k they were thinking. Apparently they thought the bridge was going to be relocated. Word is now that it isn’t. Whatever is/was being planned here, it’s clear that a really big cart has been shoved out ahead of the horse. And so now we’ve got the opposite of a bridge to nowhere (they’ve created somewhere with no bridge) and a big ugly scar in place of trees and other vegetation that provided some pretty crucial stream bank erosion control (see top photo). So what’s up with all this? I’m hearing a lot of scuttlebutt, theories and dark muttering. I’d love to hear from the horses’ mouths.

City of Duluth: What happened here? Why does this keep happening? Why such a rush (again!) to fire up the chainsaws in Chester Park (removing deadfall and storm damage is one thing, cutting healthy trees for ski trails that can’t even be used until a bridge is replaced is another)? For that matter, why is so much effort being put into maintaining ski trails in Upper Chester? I know a ton of really good local skiers and none of them EVER ski here because it’s so short and technical. Based on my own observations, I’d say hikers and runners outnumber skiers at least ten to one in Upper Chester; so why not emphasize hiking and snowshoeing instead of spending so much time and treasure grooming for such a small and elite minority? Or at least designate these trails for shared use in the winter (non skiers only need a little room along one side) instead of shutting out one of the largest and most consistent user groups of the park. Why not start with a simple census that will prove me right or wrong?

College of St. Scholastica Ski Team and Duluth Ski Club: What is your agenda in Upper Chester? Why so much zeal to create such expansive trails (you could run several groomers side by side up the “reroute to nowhere” you’ve hacked out)? Do you really believe, as some are saying, that this tiny park can be developed into a world-class cross-country ski racing destination or venue? Is this really where you want to concentrate your efforts and potentially squander your goodwill? The grumbling I’m hearing out there from people is not good. Really.

Chester Park Walkers and Runners: Why don’t you speak up? Why don’t you go to public meetings, investigate and comment on the park’s Master Plan, or communicate with city officials to at least let them know that you’re out there, day after day, leisurely enjoying what is one of the crown jewels of Duluth’s park system. You’re the only ones who aren’t in a rush and you’ve been silent too long. I know I have.

I was out of town: I need the score, I need photos, I need narrative description of the bout; I...