Another Side of Duluth Does Dylan The third Duluth Does Dylan album will be released on Friday, May 27. The release party is at Rex Bar.

All profit from Friday’s door at the Rex will be donated to the Norshor Theatre renovation, and CD profits will go to the Bob Dylan Way Cultural Pathway effort. Show tickets are available at the Electric Fetus and the Fitger’s Beer Store — $8 in advance, $10 at the door.

What’s on the disc? Here’s the back cover of the album to answer that question. Who’s playing what and when at the release party? Here’s the most recent version of the lineup:

And just to be thorough, here’s the back of the album sleeve … 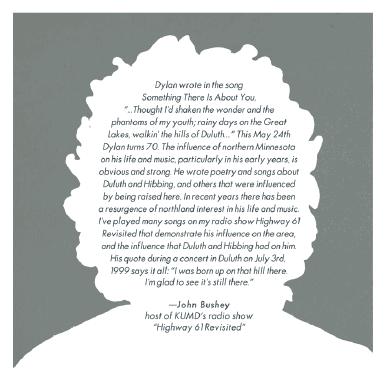 … and the center spread of the album sleeve.

http://vimeo.com/23759207 This video was shot by Mark "Sparky" Stensaas on May 3 for his blog, the Photonaturalist. Local porcupines have...