I was reminiscing of the olden days of Duluth, way back in 2001, where on First Street you could get a roast beef sandwich on a European Bakery roll for a dollar at Fichtner’s butcher shop.

I feel certain that the recipe for that roast beef a) is simpler than I expect and b) won’t translate to the home oven — that the secret was a 30-pound chunk of beef, sliced, sitting in hotel pan in the window for hours.

Sexhawk – “Duluth is Still Afloat (In Our Hearts)”

I’m guessing that Paul Lundgren will produce evidence proving my timeline wrong, but I’m still going to give you my version of the history of Homegrown’s Sharpie mustaches.

1) This may have been covered before, but do those come up randomly or in some sequence?

2) How can there be no comments on any of the banners on the Flickr site? It’s odd to me that photographers haven’t typed in more info on what’s going on in the picture.

3) Why is the little girl in the cat make-up so sad? 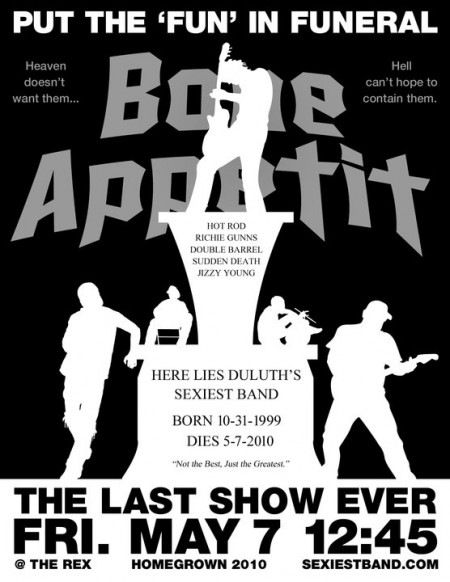 This Friday, at the Rex Bar in the Fitger’s Complex – roughly 60 hours from now, maybe more, depending on where SuddendEATH is – Bone Appetit will play its last show ever. Bone Appetit: Duluth’s Worst, then Sexiest, then Greatest Band, forever laid to rest after over a decade of service to you, the citizens of Duluth. As of last glance, there are 85 confirmed guests for this show, which [using mathematical extrapolation, as well as consulting my trick knee] means the room will be filled well beyond the fire marshal’s stated capacity.

There’s a pretty good interview with Al about Retribution Gospel Choir and Low (among other things) here on AVClub.com today. I assume this means the interview will be in this week’s print issue of The Onion as well.

Ten years ago this weekend, music history was made. 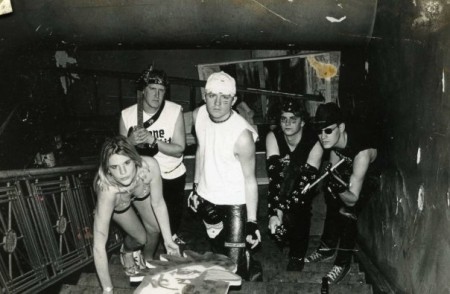 With the likes of Ricky Martin, Lou Bega and Sixpence None The Richer dominating the charts, backlash was inevitable. The world clamored for a band which did not suck; did not dance on stage [at least, with choreography]; and had the good sense to combine the best parts of Guns N’ Roses, the Misfits and MÃ¶tley CrÃ¼e into one girlfriend-thieving package.

This band, of course, was Bone Appetit.

The best song by the Replacements is “I’m in Trouble” from  Sorry Ma, Forgot To Take Out The Trash. The best song by AC/DC is “Back in Black” from Back in Black. The best song by Ol’ Yeller is “Sulfur” from Nuzzle, and the best from the Glenrustles is “3 Perverts” from some Shaky Ray comp.  G’n’R’s best song is, of course, “Paradise City”, but mainly because of Slash’s guitar freak-out at the end. We all know that the best song featuring a sample from the theme song to “Sanford & Son” is “Old Man” by Masta Killer, featuring ODB and the RZA.

Finally, I’m sure we can all agree that the best song ever is “Debaser” by the Pixies, from Doolittle.