Lean into Your Fear: Whitewater Rafting on the St. Louis River 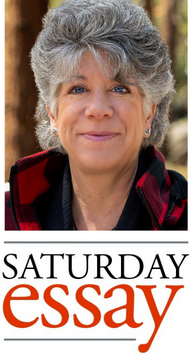 This story is from my personal blog, “Marie’s Meanderings.” When I write a travel post, because my blog’s name has the word “meander” in it, I usually open by saying I “meandered” here and there.

Well, I can’t use that term this time. It’s more accurate to say I reluctantly agreed to go on a whitewater rafting trip down the St. Louis River and promised to scream all the way!

It all started when my friend Russ, who is an experienced kayaker, won a silent auction item at a fundraiser for the St. Louis River Alliance in 2018. He won two tickets for whitewater rafting through Minnesota Whitewater Rafting, a local company that operates out of Scanlon.

Upon my insistence, we agreed to wait for the trip until the water was warm, to make it a more comfortable experience. Now it was August, month of warm weather and water, and I was out of excuses not to go. We gathered everything the company’s information sheet instructed rafters to bring: a dry change of clothes, snug-fitting footwear, windbreaker, towel, etc. And off we went.

Once we arrived at the outfitter, I was surprised by the number of other people who also wanted to fling themselves into an inflatable raft at the mercy of the river — 28 of us, to be exact, of all ages and fitness levels.

We started our three-hour journey by choosing one of the seven blue-and-yellow rafts lined up on the shore. Russ and I ended up paired with a young couple from St. Paul. A guide was assigned to each raft. Ours was named Logan.

To us oldsters, all of the guides looked like they were about 12, but we reasoned they wouldn’t have been hired unless they knew what they were doing. Thankfully, this proved true.

The ensuing safety talk by the operations guy, Blu, included instruction to ignore your instincts and “lean into” whatever fearful obstacle the raft encounters. He explained that if you lean away from the rock or high wave, you are more likely to lose your seat and fall out of the raft. Not that falling out of the raft is the worst thing that can happen, but most people like to stay with their group.

The other useful instruction was to keep your feet up if you fall overboard. This is helpful in avoiding sharp rocks and logs, etc., that are on the bottom as the current carries you downstream. Most people aren’t strong enough to withstand the current standing up anyway, so you might as well just go with the flow until one of the kayak patrollers (who go with every trip) retrieve you. The author, at left in the red helmet, leaning into her fear on the St. Louis River.
(Image via Minnesota Whitewater Rafting.)

Blu said that in a group our size, it’s common for at least one person to fall overboard. I sure hoped it wouldn’t be me.

I thought the “lean into” rule was particularly deep. Psychologically speaking, sometimes facing your fears is the best way to overcome them. Also, it reminded me of the book People of the Lie by M. Scott Peck, in which he says that most people’s psychological problems arise from trying to avoid emotional pain instead of addressing (leaning into) it.

I decided then and there to change my attitude about the trip — to stop seeing it as something fearful, and instead see it as something to relish, and an opportunity to know the river better. I mean, I’ve lived by it most of my life. I’ve canoed on it, paddleboarded it, boated on it, but I’d never immersed myself in it.

As the company’s website and instruction sheet promised, you will “see the river, feel the river, ride the river,” and you will get wet! On this sunny warm day, I was up for that.

Blu explained we’d encounter six sets of rapids ranging from Class I to III, and two sets of riffles. Each set of rapids would get more challenging along the four-plus-mile stretch until we reached the quiet-water reservoir formed by the Thompson Dam.

Safety talk over, we set out onto the water. Our first task was to run through a “slalom” course between the pylons of the freeway bridge that goes across the river. This let us practice paddling in different directions and experience what it feels like when the raft bumps into things.

Then we paddled through a set of riffles called “Warm-Up Rapids.” Everyone came through unscathed and, after stopping for an orientation, we continued to a set of surfing waves at “First Hole” rapids.

Have you ever seen standing waves that form behind an underwater rock in a river? That’s what we surfed on – if your idea of surfing involves your raft filling with water, which ours did. We surfed several times, bailing out between sessions with the handy containers provided in each raft.

After another group orientation session, we were onto “Two Hole” rapids. I think it was this one that had a big rock in the middle of it. Logan, our guide, thought it would be a good and fun idea to smash our raft into the rock.

Why he thought this was a good idea, I’ll never know. I always thought the whole idea of river rafting was to avoid the rocks. I guess I’ve been wrong all this time.

Granted, he did give us a choice, so we were complicit in the decision. I blame it on the adrenaline rush. Surfing the hole and having fun. (Image via Minnesota Whitewater Rafting)

Paddling as hard as we could, our raft went up and over the rock, then started sliding sideways. I was on the outside side — the tippiest side — and remembered to lean into the rock to avoid falling out of the raft. I almost floated out but managed to stay in by the skin of my teeth. Rather like dental surgery, it felt so good once it was over!

Our next stop was a canyon that featured a couple of small beaches in a slow section of the river. We grounded our rafts and had the chance to swim for a while, clothes, lifejackets and all.

Russ went all the way in. I was fine going waist deep, not because I was worried about polluted water or anything, but because the water was rather chilly to me even for a warm day.

At this point I realized I had never been this far into the river before; me — who had even worked for the St. Louis River Alliance, an organization whose sole purpose is to protect the river. I marveled at the brown water, tea-stained by the many wetland plants steeping in it at its headwaters and along the way. The white pines and bare rock faces along the shore looked primeval, as if we had penetrated miles into a wilderness. The beauty filled me and gave me a new sense of appreciation for the river.

Our rest stop over, it was time for the big guns in terms of rapids. We made it through “Hidden Hole” just fine, then it was onto “Electric Ledge,” which is a Class III rapids consisting of a sudden drop of four to six feet, depending on the river’s water level.

I had heard the name of this rapids whispered in awe among my kayaker friends for years. Now we were about to go over it! As our craft approached it before any of the others. Logan explained that our raft had the first aid kit in it, and we needed to go first in case the other rafts needed assistance once they ran the ledge.

We didn’t have much time to wonder at our luck because the ledge was fast approaching. I repeated all the rules: lean into your fear, keep your feet up. Then we slid over it, sideways and steep. Russ grabbed onto my arm for support.

Luckily, that steadied him, and we both stayed in the boat. So did the rest of our crew, but I can’t say the same for one of the other rafts, which did indeed lose one person over the ledge. The person remembered the rules, however, and was uneventfully picked up not far downriver.

The final set of rapids, “Little Kahuna,” is more technical than terrifying. After some twists and turns, we made it through just fine. From there, a somewhat longish paddle across peaceful water (known as the Boundary Waters to the staff) took us to the end of our journey and a bus that was waiting to drive us back to our starting point.

So, in summary, I did scream as initially promised, but it was from fun, not out of fear. I think this was due to the great job the staff did at letting us know what to expect from each set of rapids. I hadn’t had that on other rafting trips.

I would totally do it again on some warm day (although they do provide wet suits if it’s cold and you want one). And I would totally bring family members on such an adventure.

Don’t let a little fear stop you if you have a hankering for some whitewater!

Marie Zhuikov is the author of “Meander North,” due out later this year from Nodin Press. This story was made possible in part by the voters of Minnesota through a grant from the Arrowhead Regional Arts Council, thanks to appropriations from the Minnesota State Legislature’s general and arts and cultural heritage funds.