Duluth’s Ten Most Endangered Places in 2022 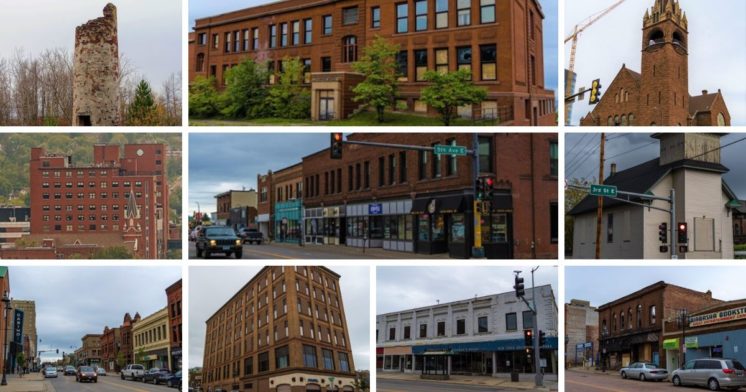 The Duluth Preservation Alliance has announced its 2022 list of the ten most endangered places. The intention is to raise awareness about historic properties that are likely to be lost. The organization previously released endangered properties lists in 2021 and 2017. An interactive story map for the 2022 list is available at arcgis.com.

Duluth Preservation Alliance members believe the American Rescue Plan Act is an opportunity for Duluth to receive funds to invest in its historic resources.

“Our historic-built environment is a key competitive advantage for the city to stand out from the crowd to businesses and individuals looking to relocate,” alliance president Blake Romenesko said in a news release. “By investing in buildings that are proven to be built to last, we can ensure that these one-time funds will benefit Duluth for generations.”

This year’s list particularly highlights the Historic Arts and Theater District, a coalition of businesses celebrating the competitive advantage of the nationally designated Downtown Duluth Commercial District. Romenesko said this part of downtown has “been under attack with a rapid onslaught of demolitions.” He believes that if action isn’t taken, Duluth will lose its “spirit of authenticity.”

“Poor planning is giving the fate of this part of downtown to the whims of out-of-town owners and developers, thus turning this historic district into a concentration of generic glass towers and parking lots,” Romenesko said.

Without historic buildings on Superior Street, Romenesko believes there would be a severe deficit in both pedestrian experience and heritage tourism for Duluthians and visitors.

The first six places on the list are organized west to east, while the last four are focused on downtown. Each place falls under one of two categories:

● Impending Demolition: There are active plans to demolish this place and thus losing it forever.

● Future Uncertain: Has any combination of deferred maintenance, unscrupulous ownership, long-term non-use, or facing other threats. 2. Nettleton Elementary
1905 | 108 E. Sixth St. | Future Uncertain
Nettleton School, named after Duluth settler and founder George Nettleton, opened in 1907. The school was a neighborhood fixture, educating nearly a century of elementary-aged students in the heart of Central Hillside. Street photographer and Mcknight Foundation Distinguished Artist Wing Young Huie attended elementary school at Nettleton, and Bob Dylan was enrolled in kindergarten there. Construction turning the building into market-rate apartments was set to begin in 2018 and finish by summer 2019, but no updates have been made and the building continues to deteriorate. 3. First Presbyterian Church
1891 | 300 E. Second St. | Future Uncertain
Designed by Oliver Traphagen, the 125-foot tall church was built in 1891 at a price of $92,000. The congregation consisted of 375 individuals, but they built a church that could accommodate somewhere between 1,200 and 1,700. The church was built with several Tiffany windows including one signed by Louis Comfort Tiffany and others made by Duluth’s Anne Weston. More than 130 years later the same congregation worships in the building. Although their numbers are dwindling making them vulnerable to the growing Essentia hospital that now overshadows the church steeple. 4. St. Mary’s Hospital
1924 | 407 E. Third St.| Impending Demolition
The Benedictine Sisters built a large Romanesque hospital on the site of today’s St. Mary’s in 1898. Over time, the building continued to be added on and changed with the 1924 addition remaining as the oldest part of today’s hospital. This is the birthplace of many Duluthians including Bob Dylan. Now operated by Essentia Health, the hospital is being replaced with the Vision Northland tower. Once completed, Essentia plans to demolish the old hospital. 5. Central Hillside Commercial Corridor (Fourth Street)
1876-1947 | Fourth to Sixth avenues east along Fourth Street | Future Uncertain
One of Duluth’s most under-recognized commercial districts. Within a two-block span exists 14 historic commercial buildings built between 1876 and 1947. These blocks are home to a number of businesses old and new acting as the Central Hillside’s main street. 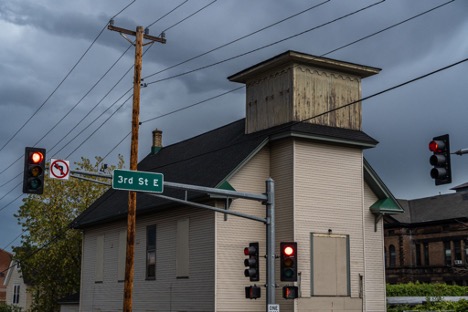 6. St. Paul’s German Evangelical Church
1873 | 932 E. Third St. | Future Uncertain
This is the oldest standing church in Duluth, built in 1872. Most of the windows are covered and the building is predominantly covered in vinyl siding. It housed a large bell cast from a cannon used in the Franco-Prussian War. Both this church and First Baptist Church were listed on the 2021 list and both were owned by St. Luke’s. First Baptist was torn down this year, making this sacred space even more endangered. 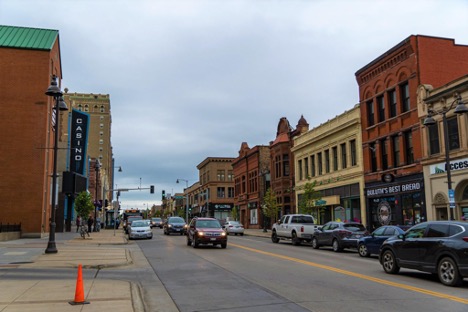 7. Duluth Commercial Historic District
1872-1929 | Majority of Downtown | Future Uncertain
Duluth’s most extensive historic district on the National Register of Historic Places. Since its creation in 2006, the Duluth Commercial Historic District lost seven buildings (six contributing) and has demolition plans for at least five more. The following highlight specific places within the historic district. 8. Bayha Building
1904 | 131 W. First St. | Future Uncertain
In 1904, furniture dealer Bayha & Co opened its new $50,000 building designed by Duluth architects German and Lignell. They quickly outgrew the building and added two additional stories in 1906. This building is currently underused with about 24,000 square feet of space available for commercial lease. During the past year, the city of Duluth sent out a request for redevelopment of this building and the Gershol Grocery next door, which could lead to demolition. 9. Hotel Astoria
1905 | 102 E. Superior St. | Impending Demolition
Duluth architect John J. Wangenstein designed the hotel, which was reported to cost $45,000 to build. In addition to the hotel, the building had four storefronts, one of which housed Poirier & Co., the original maker of the Duluth Pack. The owner, California-based Hall Equities, plans to demolish the structure, fill in the lot, and then sell the empty lot without development. In July, the citizen-ran Duluth Heritage Preservation Commission denied the permit. The owners appealed the decision to the Duluth City Council, which will take up the issue in September. 10. 100 Block of East First Street
1887-1924 | Impending Demolition
This part of the Duluth Commercial Historic District is among the most historically significant as well as the most degraded. Unfortunately, this block alone is set to lose four historic buildings. All of these buildings are contributing structures to the Duluth Commercial Historic District.

It's nearing the end of the month, which means that it's time for PDD's current events quiz! The next PDD...