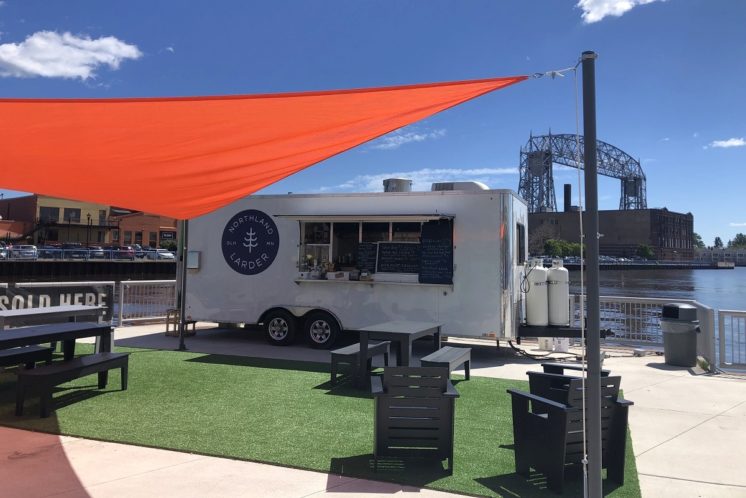 New among Duluth’s food trucks and trailers this summer is Northland Larder. The “immobile mobile food trailer” is parked near the Duluth Entertainment Convention Center between the Vista Fleet and the pedestrian bridge that crosses the Minnesota Slip into Canal Park. It features a shaded dining area, synthetic turf and Loll furniture.

The 28-foot-long Northland Larder food trailer requires a half-ton pickup truck to move, which is why it’s considered more immobile than mobile. Bjorklund and Merkel do not have such a truck and rely on a friend to move the trailer, so it remains stationary instead of changing locations like most food trucks and trailers.

The menu features the Pork Point Sandwich (house cured ham and salami on a Johnson’s Bakery Italian hoagie; also available as a salad with a Locally Laid hard boiled egg) and the Pølse med Lompe (a Norwegian-style hotdog on house made lefse with potato salad, stone-ground mustard and crispy onions). Also available are soup, a meat and cheese board and other to-go snacks like jerky, meat sticks and smokey baconed nuts.

Customers can take their food on Vista Star cruises. Some daring boaters have ordered from the water, according to Bjorklund and Merkel.

Northland Larder is open Wednesday through Sundays, 11 a.m. to roughly 6 p.m. depending on weather and other variables. DALL-E is an online tool that uses machine learning to generate digital images from plain English text descriptions. You type...