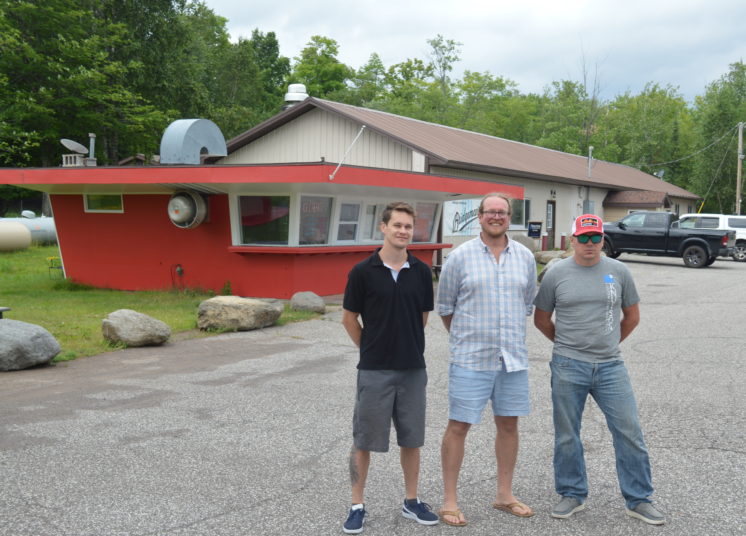 An investment group has purchased the former Boondocks saloon & grill and drive in on the south side of Island Lake. Investment group spokesperson Andrew Knutson, right, said the group plans to revitalize the roadside business district. Lake Ave Restaurant and Bar owner Derek Snyder, center, will take over food operations and Luke Anderson, left, has been named head chef at the new location. (Photo by Mark Nicklawske)

A popular Canal Park eatery started serving smash burgers and ice cream at a historic drive-in this summer while work is underway to expand operations at the site and create a new destination restaurant just south of Island Lake.

Lake Avenue Restaurant and Bar ownership opened the Lake Ave Drive In at the site of former Porky’s Drive In, 7047 Rice Lake Road, in Gnesen Township earlier this month. The adjacent Boondocks Saloon and Grill has been gutted and will see a major remodeling before it opens later this year as Lake Effect Restaurant and Bar at Island Lake. The new restaurant openings are the first steps in transforming the small roadside business district to serve lake country travelers and the growing suburban neighborhood.

“It’s kind of two businesses in one,” said Lake Avenue Restaurant and Bar owner Derek Snyder. “One side of the building is going to be the new bar and restaurant. In between there is our professional-grade kitchen and then the other end, it’s kind of like the old-school Porky’s ice cream place.”

The drive-in will be open during the summer and serve Bridgeman’s ice cream, smash burgers, bratwurst, walleye and a few other creative options. A liquor license is also in the works to serve beer, wine and cocktails.

Lake Avenue Restaurant and Bar has been owned by Snyder and his partners for 13 years and serves as an anchor in the Dewitt-Seitz Marketplace. Snyder said he has been looking for expansion opportunities outside of Duluth to win new patrons and give staff more advancement opportunities.

An artist rendering shows the new front decks and entryway for Lake Effect Restaurant and Bar at Island Lake.

When it opens, the new Lake Effect Restaurant and Bar will offer a “cabin chic” menu similar to its sister establishment in Canal Park. Steaks, chops, ribs, seafood and vegan options will be offered in addition to more relaxed fare like macaroni-and-cheese and fried chicken. Snyder said pull tabs and bingo nights are being explored along with space for local art and music. Current Lake Avenue Restaurant and Bar sous chef Luke Anderson will serve as head chef.

“We’re really excited about it,” said Snyder. “In the restaurant business you don’t really get lucky twice but we’re hoping to — with a lot of hard work and passion again. Just kind of bring the same things we’ve always brought (to Canal Park). It’s more about just the fun of having a restaurant, meeting the people and the customers and serving good food.”

MIG partner and Knutson Custom Construction CEO Andrew Knutson said the Island Lake area is growing, attracting more residents and cabin owners from Duluth. Knutson, Snyder and others in the partnership all have connections that go back to their time at Duluth East High School.

“We’re calling our spot downtown Island Lake,” said Knutson. The development group wants to make the small business district the center of the Island Lake community and has plans to bring other new services and entertainment to the area. Negotiations are underway to purchase the neighboring Porky’s Truck Stop, which closed in 2021.

“A lot of people are moving to Island Lake and the surrounding area because suburbia is happening,” said Knutson. “If suburbia is going to happen and you gotta move away from the big lake, what’s the next best place to be? On another big lake.”

Knutson said more people are buying homes or cabins in the Island Lake area and working remotely. “The caveat to that is it’s 20 minutes away from Duluth,” he said. “So what we want to do is provide amenities to them up there.”

Establishing a fun family drive in and opening a quality restaurant will be the first steps. Knutson Custom Construction has worked with other area restaurants like Scenic Cafe, Va Bene and Bridgeman’s on recent remodel projects.

“I’m really excited to see where it goes,” said Knutson. The historic drive in south of Island Lake has operated under numerous names for more than 60 years. To many, the place is best known as Porky’s. (Photo from Zomato.com)

Constructed in 1955 by George Jackson, the low slung, red and white building was purchased in 1963 by Ray and Gay Leimer and named the High 12 Drive In. Recently retired Gnesen Town Clerk Lottie Haller said her parents owned the establishment for about 10 years.

“My mom pretty much ran it,” said Haller. “She was a really good cook. The last owner got a hold of us to get her old onion ring recipe.”

Haller said the drive in featured car-hop service and was always busy in the summer. “On a good day, I would dish up 500 ice cream cones, you know the hard ice cream, it was like Bridgeman’s,” she said.

Al Johnson purchased the business in the early 1970s and operated it until he suffered a heart attack while working at the drive-in and later died.

The property was renamed Porky’s in 1987 and a bar/restaurant addition was constructed on the north side of the building in 1990. The complex was most recently operated by Paul Riesland and was known as Boondocks. The business closed in 2021.

Knutson said the new Lake Effect Restaurant and Bar will seat about 90 people and feature two outdoor decks off the front of the building. The restaurant will also have a small back room for parties and gatherings and the dining room includes a stage for local music. Work is underway on a new kitchen.

Anderson said the menu will feature food with fresh, locally sourced ingredients similar to their Canal Park location. “But it won’t be the same. We’ll put an Island Lake twist on it out here,” he said.