Above is what the partisan side of the primary ballot looks like for Duluthians on the western side of the city. Those on the eastern side will see candidates for Minnesota State Representative for District 8B instead of 8A. The dividing line of the district is at First Avenue East and also runs north/south along Kenwood Avenue. 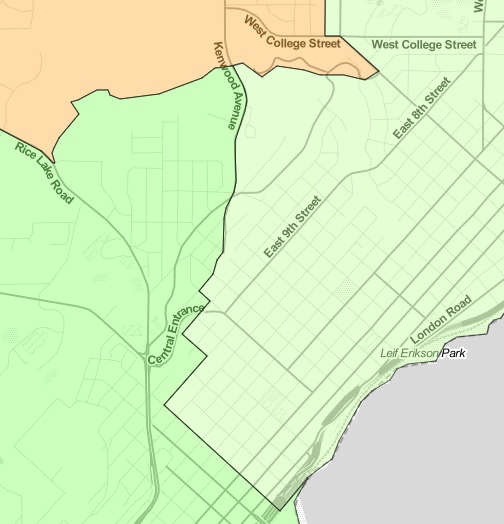 The darker green area in the map above is the 8A side of the divide; the light green side is 8B. Therefore, citizens east of First Avenue East and Kenwood Avenue will not see the race for Minnesota State Representative for District 8A, but will instead see the option below on their ballots.

All Minnesota ballots have a slate of partisan races on the front. Voters must choose a party and vote a straight ticket, choosing candidates from one party only, as explained on the ballot.

The back side of the ballot, below, has just one item, the nonpartisan race for St. Louis County Sheriff. These candidates are not affiliated with a political party; voters select one candidate in the process of narrowing the field to two candidates for the General Election.

There are numerous candidates in other races who are not appearing on the primary ballot because they are unopposed. Some partisan races appear on the ballot even when they are not contested because an opposing party has a contested primary and the party with the uncontested race doesn’t want voters to forget it is putting a candidate forward. The General Election will be held on Nov. 8.

Postcard from Priley Fountain and the Radisson Hotel

This 50-year-old postcard shows what was then the new Radisson Hotel behind the also new-at-the time Priley Fountain at the...