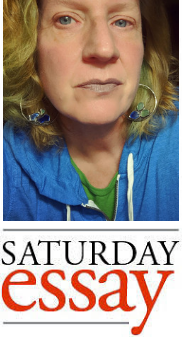 I push through the door — it’s late, but the massive cowboy hat on the roof glows red — and step into something more like a nightclub than an Arby’s. Steady, throbbing beats pulse across the rafters of the dim dining room, threading through stacks of waxed cups, snapping plastic straws with reverb.

This roast beef hashery is my kind of joint.

Eyes float to the menu board; simultaneously, my chin begins to bob. Anticipating the imminent rush of potato cake puissance, my body ticks with the vocals.

“OH MY GOD!” the blondie behind the counter shrieks as she looks up from tying a trash bag. My presence has startled her.

Check out my Chrissie behind
It’s fine all of the time
Like sex on the beaches,
What else is in the teaches of Peaches? Huh? What?

I hadn’t been sure where I’d find dinner that night, speeding north on the highway after a day in the big city. My brain believes restaurants are open late, but, as life continually reminds, my brain knows little. Listening to a podcast, feeling the emptiness of my stomach, facing two more hours in the car, I’d decided it was a good night to relax privileged condescension about fast food and enjoy a return to my hungry-no-money roots.

Ever besotted with the crispy triangle of a potato cake, I am considering a pack of three when the blonde worker’s squeal pitches me into a state of

And then, mid-huh, the music cuts. Without the heads-up nicety of “Last call!” the lights in the dining room rudely flick on, and my cheeks crinkle to shield offended eyes.

Scurrying low, perhaps crawling on all fours past the melted blonde in the ketchup packets, Joe has answered the screech.

There was more than one blonde screeching and at least a handful of folks on all fours the night Peaches performed at First Avenue in October of 2015.

Off to the side, standing alone and rapt — almost immediately, I’d lost my friends when I bolted for a bathroom break at the legendary club, a place that had once been second home — I swooned into Peaches, rejoicing at green snakes, grasping hands, dancing vaginas, monstrous bushes, entwined handcuffs, straight-faced genderplay, gnashing teeth, a thirty-foot penis extending over the crowd.

Luckily, aging is glorious, if not for the knees, for the confidence. I knew my beloveds were somewhere over there, on the other side of four hundred sweaty bodies, heads bobbing in concert with mine — wherever I was — and I’d find them eventually, perhaps after the encore near the Jayhawks star when we all staggered out to the sidewalk, shoe soles sticky with dried beer. In the meantime, I was firmly over my own feet, sucking in the energy of whoops and hoots, pushing back against sweaty bodies, leaning into the communal bump and sway of a shared beat.

When the overhead lights flare, I am mist, floating in two places, head in the club, feet in the dining room.

Ah, but in front of me is nervous-faced Joe, ready to jolly the Mom Lady who’d stumbled into his Arby’s after closing time before anyone had thought to lock up. Mom Lady might not like titty songs?

“So we’re, uh, like, closed,” Joe offers, raising a limp hand to the dimmed lights, evoking 1972 Stevie Nicks returning to the apartment after a long day of cleaning houses to find Lindsey Buckingham flat on the futon claiming mononucleosis.

From under the Arby’s counter, a muffled complaint floats out of the cardboard condiment box — frickin-frackin’ hurry up mustard sweat. More scared of messy blondes than menopausals, Joe gets assertive.

“Uh. Ma’am. You’ll need to leave because …” He unfurls his arm grandly above the well-scrubbed counter, this time Freddy Mercury in a boa inviting the crowd to sing along during the encore.

I see you, Joe. This is your stage; the roadies are packing up the pyrotechnics; you want the crowd to hit the parking lot already. And because I’m so so so very good within me now that I’m in the creaky phase of life — gah, the grace of getting through — this awkward dismissal lands as achingly sweet.

I pivot toward the door, Joe’s shoulders lowering from his ears another inch with my every step.

I stop. Look back.

“Hey,” I call out, leaning forward to peer at Joe’s shadowy shape in the darkness. He appears to be coaxing a blonde out of a cardboard box.

“Yeah?” The Mom Lady’s got him twitching again.

I grin. “You all should crank that song. Peaches is the best. I saw her at First Ave a few years ago, and I’m not over it yet.”

Joe doesn’t know the word, but he’s gobsmacked. Recovering, still a little wild-eyed, he nods. “Oh, wow. You did? That’s so cool.”

It is so cool, Joe. Just because my last egg has dropped doesn’t mean I can’t appreciate a thirty-foot penis.

Buoyed by communion, Joe offers a suggestion: “Hey, our drive-thru is still open. If you want to swing your car around, I can help you there.”

I nod. Hell yeah I will move my body fifteen feet, to the other side of a window, if it means I can crunch some salty triangular crispness.

Moments after “Welcome to Arby’s”-ing me over the intercom, Joe is waiting at the window.

“Hi,” he smiles. “So, uh, would you by any chance also want these three apple turnovers? They were already made, and we just have to throw them out, so –“

I take a bag of this and a bag of that, hand over my credit card, and our time together is over. He’ll mop a floor. I’ll drive north. We’re through.

But for the next half hour, as paths diverge, we’ll be humming the same notes, whispering the same transgressive lyrics gone mainstream. Joe and I, distantly together, will wonder as we stare into our respective darknesses

What else is in the teaches of Peaches? like sex on the beaches

I still think about Joe — because I still and always think about everybody and everything.

I have a wish for him.

One day, if all goes right and you find the gumption to throw a duffle bag into the back of your Ford Taurus, gunning it for mountains beyond the plains,

I hope you — with the joyful liberation of having busted out of a backwater, aided by the enthusiastic participation of a mustard-coated partner — turn your face to the light and learn to

https://www.youtube.com/watch?v=pw9HPSOf7R8 "The right amount of elbow grease" is what the narrator recommends during this video tour of the former Finland...