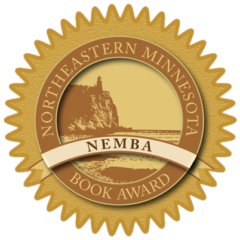 The Northeastern Minnesota Book Awards have a new organizing body, Lake Superior Writers. As a fan of NEMBA, the University of Minnesota Duluth and LSW, I think this is good news for all.

Below, the news release:

After three decades, the Northeastern Minnesota Book Awards have new organizers. In 2021, longtime award coordinators at the Kathryn A. Martin Library at the University of Minnesota Duluth announced that due to staffing changes, the university library would no longer organize the awards. With the awards facing an uncertain future, Lake Superior Writers, a local nonprofit organization, volunteered to assume responsibility for the awards and plans to announce the next round of winners in the fall of 2022.

“We know how important these awards are to writers and readers in northeastern Minnesota,” says Lake Superior Writers board chair Leslie Mehle. “We’re thrilled to have the opportunity to help these awards continue.”

NEMBA recognizes books that substantially represent the history, culture, heritage, and lifestyle of northeastern Minnesota. The authors don’t have to be from Minnesota in order to have their work considered, a distinction which, according to Mehle, sets NEMBA apart from other awards which require authors to reside in a specific region to be eligible.

“NEMBA is different because the focus is on the subject matter of the book, not where the author lives,” says Mehle. “This award specifically celebrates the history, heritage, and culture of northeastern Minnesota. That’s an important distinction, and it makes NEMBA special.”

The award recognizes six categories, naming a Winner and an Honorable Mention for each, honoring authors, publishers, poets, photographers, and illustrators with a cash prize and a plaque. Community members are invited to participate in the evaluation process by joining reading teams for each category. Reading Team recruitment will begin in the spring.

“It wouldn’t be fair to authors who had the bad luck to publish a book during a global pandemic to be deemed ineligible,” she said. “We couldn’t, in good conscience, exclude them from consideration.”

Due to the change in award organizers and the uncertainties of COVID, there will be no public event for presenting the awards this year.

“We really want to focus on handling two years’ worth of nominations and developing a strong committee to put NEMBA in a good place for the future,” says Mehle. “This year, the awards themselves are our highest priority.”

She noted that they expect to return to an in-person award presentation in the future.

Matchbooks from Superior-area Restaurants and Bars

One year ago Perfect Duluth Day published a collection of "Matchbooks from Duluth Restaurants and Bars." Now we honor the...