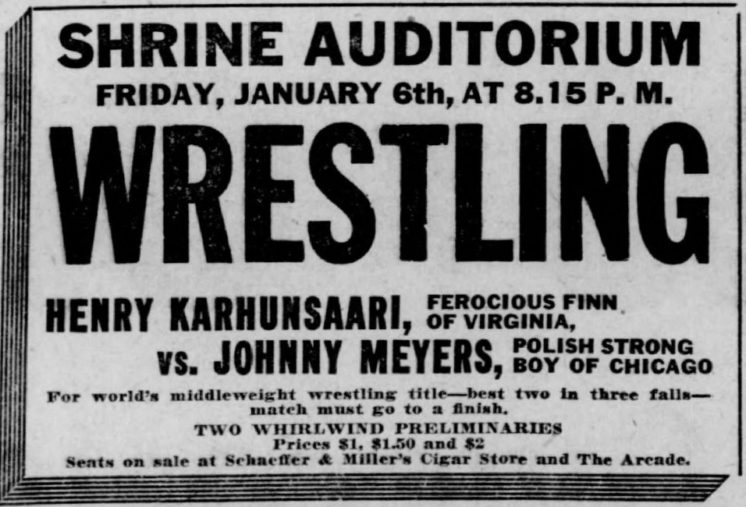 It was 100 years ago today that Henry Karhunsaari, “the Ferocious Finn of Virginia,” was knocked unconscious in the deciding fall of what Duluth Herald sportswriter Sandy MacDonald called “the most spectacular and most fiercely contested wrestling match ever staged in this city.”

The match, promoted by Duluth’s R. J. Carnes, was held at the Shrine Auditorium at 201 E. First St. on Jan. 6, 1922. The world’s middleweight championship was at stake, and MacDonald reported the day before the “mighty titular struggle” that betting was “at even money.”

Karhunsaari’s opponent was Johnny Meyers, the “Polish strong boy” from Chicago. The “Windy City Pole” was known as a master of the wristlock. His manager, Ed White, issued a statement before the match that “Meyers’ hands are in wonderful shape and the world will tell you that when his paws are right he works the wristlock so strongly that no opponent is able to withstand the punishment.” Karhunsaari told MacDonald he had received taunting letters from Meyers’ friends in Duluth and Chicago leading up to the match.

“Some of the letters are really abusive,” Karhunsaari said. “They say he will make me dizzy — that he will fan the ceiling with my heels — that he will wristlock me so hard that I will not only say ‘Uncle,’ but will scream it right out in meeting. One Meyers’ fan says the Chicagoan will make me look like a one-legged man with St. Vitus dance trying to do the Nashville salute.”

Karhunsaari was up to the task in the first fall, pinning Meyers with a half Nelson. Meyers took the second fall with a reverse arm lock and a body scissors.

“In the deciding fall, Meyers hurled Karhunsaari to the mat with such force that he rendered him unconscious and the Finn was unable to continue,” MacDonald wrote in the Jan. 7 Duluth Herald. “Karhunsaari landed squarely on top of his crown and stiffened out like a dead man. For several minutes the spectators thought his neck was broken.”

The card also featured Joe Stecher and Bill Panquin battling to a draw, along with two other preliminary bouts.

The image of Karhunsarri below is from the February 2011 issue of Akti magazine. Donation amount: $ (Enter the amount of your choice.) We urge everyone to proceed with caution while the Omicron variant...