Finally unearthed from the PDD video archive, clips from the May 10, 1988 World Wrestling Federation card at the Duluth Arena. The segments available here are matches that were broadcast on the syndicated television program Superstars of Wrestling on May 22 and 29, 1988. Numerous other matches were taped at the same Duluth card and broadcast in subsequent weeks.

The May 22 telecast begins with “words of welcome” from Duluth Arena Manager Bill Scheiger. Color commentator Jesse “The Body” Ventura then notes he’s particularly excited to be in Duluth because it’s “very close” to his hometown; he was born in Minneapolis. 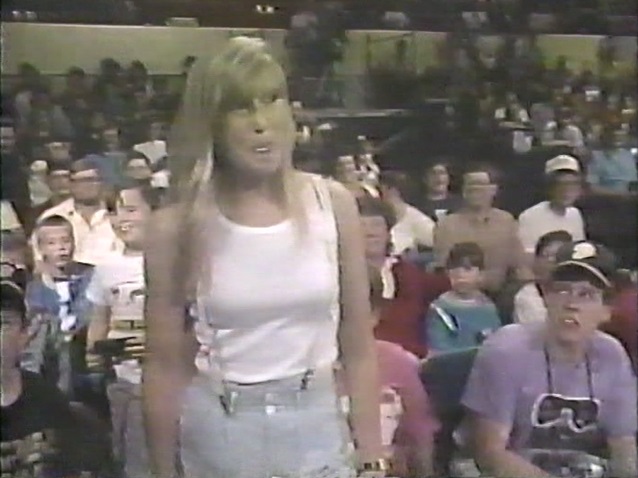 The next match can’t be shown here because WWE has blocked it with a copyright claim. This is a shame because it’s the best clip of the bunch. “Ravishing” Rick Rude, accompanied by Bobby “The Brain” Heenan, asks all the “walleye-lookin’, fish stinkin’ Minnesota boys to keep the noise down” while he takes his robe off to show Duluth’s “love-starved ladies” his “simply ravishing body.” And of course he plants a kiss on a woman from the crowd, shown wetting her lips in the screenshot above.

The segment also included an interview with Brutus “The Barber” Beefcake in which the Honky Tonk Man sneaked up behind him to “tune” his guitar by slamming Beefcake across the back with it.

The World Tag Team Champions, Demolition, with manager Mr. Fuji, defeat Buck Zumhoffe and Warren Bianchi. Following the match, a segment with Lord Alfred Hayes takes a look at Hulkamania “at its zenith,” featuring a match from the previous week’s episode (not shot in Duluth) between Hulk Hogan and Nikolai Volkov.

Koko B. Ware pins Terry Gibbs. Before the match Craig Minervini (DeGeorge) interviews Brutus Beefcake from the locker room in the aftermath of the Honky Tonk Man’s attack.