Among 2021 restaurant closures were two of Guy Fieri’s favorites 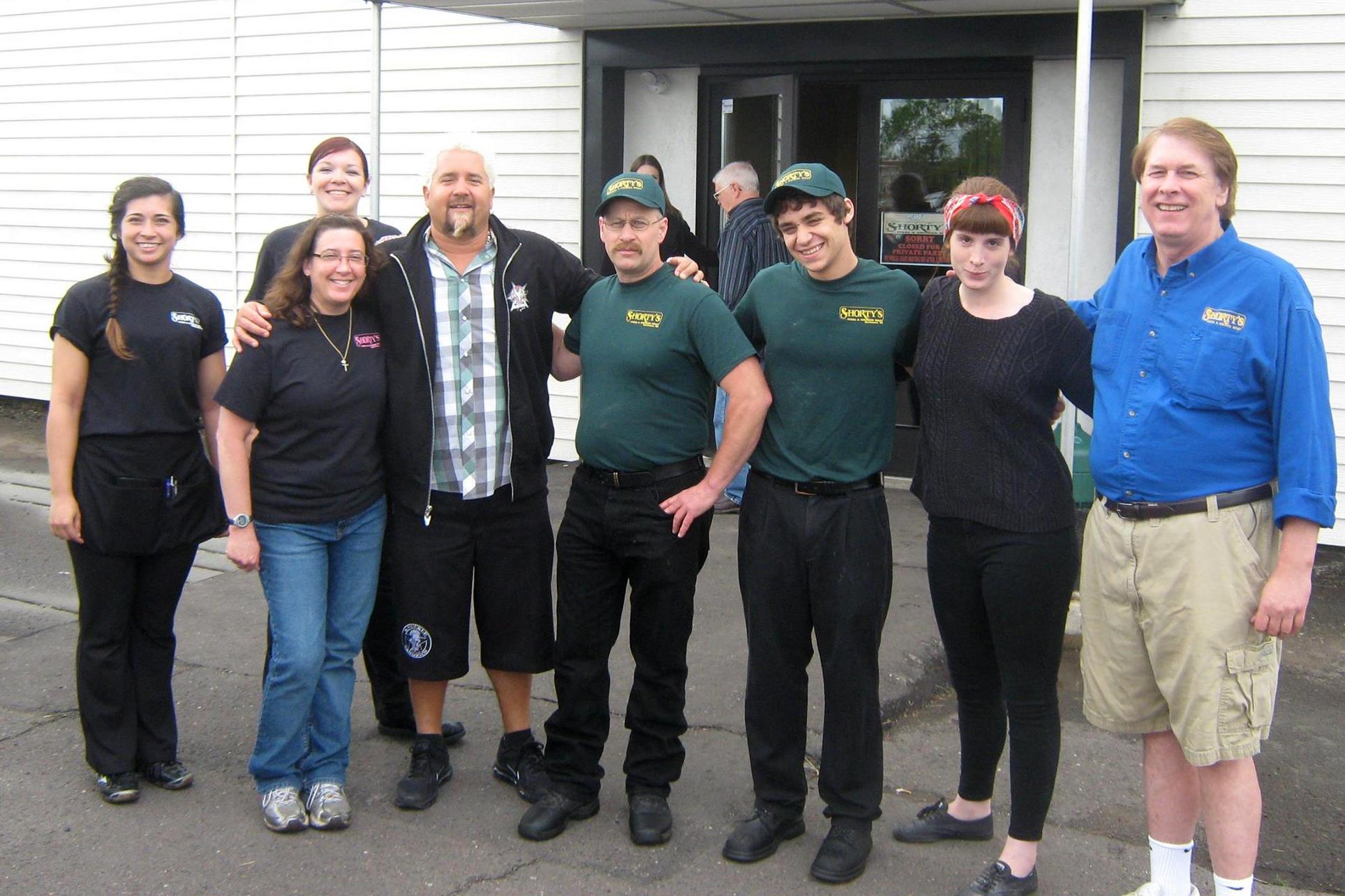 Television personality Guy Fieri poses outside Shorty’s Pizza and Smoked Meats with members of the restaurant’s staff. Fieri visited four restaurants in the Twin Ports area in 2014 — Shorty’s, Gannucci’s Italian Market, Pak’s Green Corner and the Kounty Quarthouse. All four have since closed.

The effect of COVID-19 on the restaurant industry is tricky to quantify, but in the Duluth area there is one noticeably positive trend. More new eateries are opening than existing ones are closing.

While the ongoing pandemic played a role in pushing some eateries that were in trouble over the edge, in most cases other factors were at play. At the top of the list of closings in 2021 were three family-owned ethnic restaurants. Staff at Osaka Duluth got together in August after the restaurant ended its 11-year run in the Burning Tree Plaza strip mall. Photo via Facebook

Osaka Duluth announced its July closure on Facebook. No specific reason was offered, but followup posts indicated Osaka was undergoing a metamorphosis and not going out of business.

“Osaka gift cards and VIP cards will remain effective and can be used at our sister restaurant Cloud 9 in Duluth while Osaka is closed for relocation,” one Facebook post noted. “We will also be opening up another restaurant in Duluth, where Osaka VIP cards and gift cards will also be available for use.” The “remodeling” of a location in the “Hill area” was also mentioned. The Chinese Dragon restaurant, seen here with other businesses in the Hotel Astoria building in 2017, recently announced its closure. Photo by Paul Lundgren

Duluth’s 40-year-old Chinese Dragon restaurant announced on Dec. 16 it would close at the end of 2021. The news came one day after an in-depth Duluth News Tribune profile on owner Fong Tang that quoted her saying, “I will retire when they tear the building down.” The newspaper referred to “decade-old, debunked rumors about an extension of a hotel that was allegedly going to lead to the demolition of the historic building” and noted that “according to Tang, the restaurant won’t be changing soon.” On Dec. 17 the News Tribune reported the building will be demolished to make room for not a hotel, but a parking lot, and Tang was set to retire. 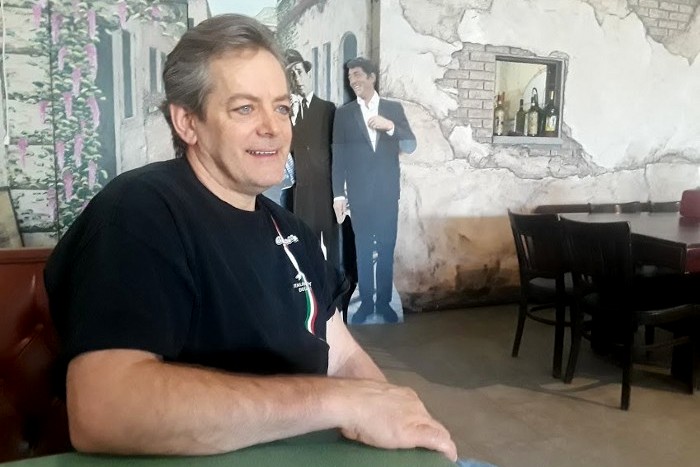 William Kalligher, seated in his Italian restaurant and grocery store in this 2018 photo, closed his operation in 2021 and later was arrested and charged with criminal sexual conduct. Photo by Sam Faust for Lake Voice News

Gannucci’s Italian Market closed with no warning this past summer after about 40 years in business and a decade in its most recent incarnation. Rumors had persisted since then that owner William Kalligher had engaged in criminal behavior that led to the abrupt closing of the store. The Duluth Police Department arrested Kalligher on Dec. 21 and the next day he was charged with seven felony sexual assaults against two children.

Previously known as Conito’s Italian Village, the business was located at 301 Central Ave. in West Duluth and operated as a restaurant and grocery store. The space was emptied when a liquidation auction was held in August.

In 2014 Gannucci’s was featured on the cable television series Diners, Drive-ins and Dives, hosted by Guy Fieri. Top left and bottom images of Shorty’s interior from a 2013 Perfect Duluth Day feature. Top right photo is owner Brian Noel during an interview on “Diners, Drive-ins and Dives” in 2014.

Another Twin Ports restaurant visited by Fieri in 2014 was Shorty’s Pizza and Smoked Meat. Fieri returned for a second visit in 2021, with the television segment airing just a week before the Superior restaurant closed. The ongoing labor shortage was cited as the reason for its shuttering in July.

A Facebook post noted the closing was “not a bankruptcy,” that all staff and suppliers had been “paid in full,” and 2020 had been the restaurant’s “most profitable year ever.” However, the post explained that difficulty recruiting staff led to the decision to shut down. “If we can’t give you the level of service that you expect and deserve, then closing would be our best option,” the post noted.

Owner Brian Noel opened Shorty’s in 2013. It was known for burgers, sandwiches, pizza, and, of course, smoked meats. The Superior Telegram reported in 2019 that Noel had been seeking a buyer for the business — and it appears the labor shortage only hastened this process.

The building at 1015 Tower Ave. is expected to become either a second location or the new location of Bucktales Cantina and Grill, a Mexican restaurant presently located in South Superior near Pattison Park. Bucktales owners Damaso and Mary Ellen Morales announced on Facebook in October that they were “working on a project in downtown Superior to add part of our business to the Shorty’s location. It is not finalized and we are still working through the plans.” Jamar Kirk and Keith White’s takeout pizza joint in Superior ran out of go and stopped in 2021 after just a year in business. Maybe there’s another place at the Miller Hill Mall where one could get a bag of chocolate-covered potato chips to shame-eat while shopping, but Rocky Mountain Chocolate Factory was the best. The concourse location, across from the GNC and Bath Planet stores, closed in early January after owner Debbie Bolen said in a news release that 2020 had been “So difficult for business.” 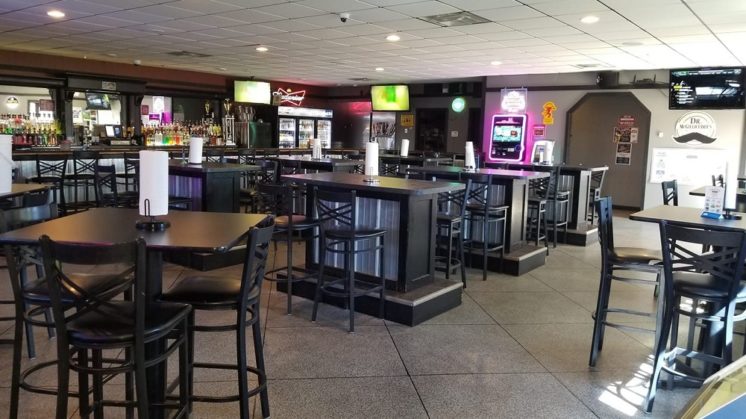 Superior’s Tavern 105 closed in June after announcing the sale of its building in a February post on Facebook. “Thank you from the bottom of my heart,” owner Shelly Nelson wrote. “I made it where I am today because of each and every one of you. Staff, customers, family and my handpicked Tavern 105 family: I appreciate everything you have done to make 105 a successful business the last six years.”

The eatery was known for dishes like gyros, Philly sandwiches and fish. Chicken wings were a favorite of many customers. The former Big Bottle Liquor Store at 2401 W. Superior St. in Duluth is slated to become a Mexican restaurant in 2022. Photo by Paul Lundgren

Also known as “Liquor Store” — that’s what the sign said, nothing more — Lincoln Park’s Big Bottle Liquor Store announced its closure in June and had a 50 percent off sale near the end of July. Owner Randy Mallow was quoted by Fox 21 saying “I’m sure there will be a lot of sad people, and a lot of people we haven’t seen in a year will be back to say goodbye, but I appreciate … all the business you’ve given me.”

Mallow told the Duluth News Tribune that competition from other liquor stores in the area had led to his decision. “If you’re in a small business, like a restaurant or something — where you’re making a decent markup on your product — that’s one thing,” Mallow told the newspaper, “but with liquor being so competitive, there isn’t much of a space there, because it’s not cheap.”

The building was sold in July to Oasis Del Norte food-truck operator Eduardo Sandoval-Luna, who plans to open a restaurant there in 2022.

For details on eating and drinking establishments that opened in 2021, read the companion piece to this story, “New restaurants abound in Twin Ports; tacos is the trend.”

It Takes a (Shipping) Village: Duluth’s Harbor springs to life