The Last of the (I Think) Futter Collection So, this is the last batch of records purchased at a $5 bag sale at Gabriel’s Books in Lakeside.

For the record, there are tons of other places to buy vintage records in town. There is, as of this date, a collection of about 100 individually sleeved 78s (sleeved in their original sleeve, I think, and then slipped inside a Ziploc baggie) and similarly old records at Earth Exchange, where each is 99 cents. It’s a real deal, but it’s not the same as the $5 bag sale.

Similarly, there are some real finds in the dollar bins at Vinyl Cave, now inside Globe News, where you can also buy a limited selection of new LPs from Record Store Day and LPs from local artists (on consignment, I think). Tom (the owner) is always looking for local music.

And lastly, someday, I’ll do up a series on the great deals I got at Goodwill on Garfield Avenue.

I mean, they were good deals to me, but I like listening to new-to-me-but-old music, which gives me something to think about, write about.

So here I go. In the last post, we learned that at least one of these portfolios of records were owned by Helen A. Futter. Based on handwriting, this folio might be, too. On the other hand, if I found these records in my mother’s attic, I would have sworn that the handwriting was my grandmother’s. It’s as if women of a certain age all learned to write the same way. Maybe. According to Wikipedia, “Yehudi Menuhin, Baron Menuhin, OM KBE (22 April 1916 – 12 March 1999) was an American-born violinist and conductor who spent most of his performing career in Britain. He is widely considered one of the great violinists of the 20th century. He played the Soil Stradivarius, considered one of the finest violins made by Italian luthier Antonio Stradivari.”

Honestly, I would not know how to rate violinists beyond “good” and “not good.” I’m more interested in his story, and his story is more interesting in wartime.

He performed for Allied soldiers during World War II and, accompanied on the piano by English composer Benjamin Britten, for the surviving inmates of a number of concentration camps in June and July 1945 after their liberation in April of the same year, most famously Bergen-Belsen. He returned to Germany in 1947 to play concerto concerts with the Berlin Philharmonic under Wilhelm Furtwängler as an act of reconciliation, the first Jewish musician to do so in the wake of the Holocaust, saying to Jewish critics that he wanted to rehabilitate Germany’s music and spirit. (Wikipedia)

This story connects with me in two ways. First, Benjamin Britten’s War Requiem is one of my favorite works of classical music, and I love the idea of Britten and Menuhin playing together at Bergen-Belsen.

Second, the idea of playing music as reconciliation — magic, to me.

The pieces he is playing here are composed by a violinist, who also played a Stradivarius. Richard Crooks, the tenor on these recordings of Wagner, was both an opera sensation and a pop celebrity. “From 1928 to 1945, Crooks was the host of ‘The Voice of Firestone’ radio broadcasts, in which he sang operatic arias, patriotic songs, folk songs, and popular hits such as ‘People Will Say We’re in Love’ from Rodgers and Hammerstein’s Oklahoma! in 1943. He also appeared on radio broadcasts with Bing Crosby, who remained a friend until Crooks’s death” (Wikipedia).

These pieces were among his favorites of his own recordings. Below is one of his radio shows. Another disc or two from the Boston Pops, which I discussed here. Nelson Eddy was the vocalist on this Wagner recording. Nelson Eddy was “a classically trained baritone, [who[ is best remembered for the eight films in which he costarred with soprano Jeanette MacDonald. He was one of the first ‘crossover’ stars, a superstar appealing both to shrieking bobby soxers and opera purists, and in his heyday, he was the highest paid singer in the world” (Wikipedia). He actually had a romance with MacDonalds, and (I think) fathered at least one child with MacDonald (whose partner was incapable of conceiving).

There remains a fan club for this romance, found here. These pieces are recorded by the Janssen Symphony Orchestra, led by Werner Janssen. More Wagner, this time by Arturo Toscanini, who “was one of the most acclaimed and influential musicians of the late 19th and early 20th century, renowned for his intensity, his perfectionism, his ear for orchestral detail and sonority, and his eidetic memory. He was at various times the music director of La Scala in Milan and the New York Philharmonic. Later in his career he was appointed the first music director of the NBC Symphony Orchestra (1937–54), and this led to his becoming a household name (especially in the United States) through his radio and television broadcasts and many recordings of the operatic and symphonic repertoire” (Wikipedia).

I snagged a stack of Toscanini discs from the library sale at the College of St. Scholastica Library. So I’ll write more about him later.

Is there anyone today who has the pop visibility and classical status that Toscanini had? John Williams, maybe, except we only know his work, not him. Toscanini was a personality as well as a talent. 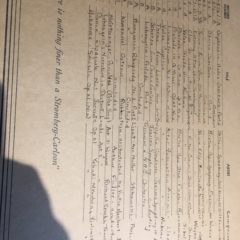 Lastly, the tracklist, the index, the collection in (I think Futter’s own) hand.

I’m going to sit down with all of these, this weekend, and make some final statements on owning records between 1920 and 1950, on who I think Hellen A. Futter was, on the diversity of the popular music in that period, in a subsequent post. I look forward to your thoughts.

A historic "Furniture Row" anchor store in Duluth’s Lincoln Park Craft District has new owners who plan to renovate the...