Closer to the Core: Helen A. Futter’s Records Yesterday was a “snow day,” meaning things were open, but my Kia Soul was not equipped to get me there while the snow fell on the ice. So I took a break from grading some excellent papers by my students to go over my next stack of records from Gabriels’s Used Bookstore in Lakeside.

A bit about Gabriel’s:

All of our books are donated to us.

We offer life memberships to our store for $9.95. All members well receive a 20% discount on their entire purchase.

Frequent buyer cards are available for the bookstore at no cost! You will receive a stamp on your card for each dollar spent at Gabriel’s Bookstore. Fill the card with 20 stamps, and receive a FREE book of your choice!

All children, from birth to high school graduation, may pick out a book for FREE, each time they visit our store.

We give a 20% discount to all grade school, high school, college students and teachers.

Honestly, the most I’ve ever spent there, in a single throw, was $10, and I brought home something like 80 poetry books (in their $5 bag sale). So while you can use the frequent buyer card and the various discounts, it’s a deal everyday, even if you forget.

A lot of the donations they talk about are estates, I think — people donating the libraries of their elders. The records I’ve been talking about in these posts have been from, I think, at most two collections. Today, one of the sleeves of the records indicates the owner — a “Helen A. Futter.” I wonder whether she’s related to Frank N.?

Some part of me will burn someday for jokes like that. Ok, here we go. The Boston Pops Orchestra was a commercial juggernaut; according to Wikepedia, “the Boston Pops has sold more commercial recordings than any other orchestra in the world, with total sales of albums, singles, tapes, and cassettes exceeding $50 million.” Its conductors included Arthur Fielder, who made it into a household name, and John Williams, whom we all know for his most famous work, the theme to Lost in Space.

“Toy Trumpet,” the composition I bought, is by Raymond Scott. I’m partial to his “Powerhouse” song, myself. “Though Scott never scored cartoon soundtracks, his music is familiar to millions because Carl Stalling adapted it in over 120 Bugs Bunny, Porky Pig, Daffy Duck, and other Warner Bros. Looney Tunes and Merrie Melodies cartoons. His compositions may also be heard in The Ren and Stimpy Show (which uses Scott’s recordings in twelve episodes), The Simpsons, Duckman, Animaniacs, The Oblongs, and Batfink.” Do you recognize this one? 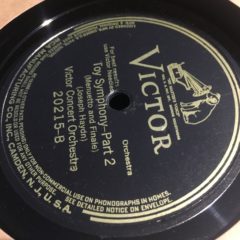 The Victor Concert Orchestra is a throwback to the days when RCA Victor wanted to create content for this newfangled recorded media, and so it hired its own musicians and branded them with the label’s brand. The Toy Symphony is a work a musical work dating from the 1760s with parts for toy instruments (according to Wikipedia, this includes toy trumpet, ratchet, bird calls (cookoo, nightingale and quail), Mark tree, triangle, drum and glockenspiel). Ray Noble (and his orchestra) are fascinating. Noble was, like many band leaders of the day, a transmedia celebrity, appearing on radio, records, movies, and more — including appearing as a straight man opposite Edgar Bergen’s ventriloquism act and opposite the comedians Burns and Allen. (When I was a kid, I dreamt of being a ventriloquist.) Percy Faith was a Canadian bandleader, credited with popularizing easy listening. “Embraceable You,” one of the two songs included on this disc, is by Gershwin. (I like a Gershwin tune. How about you?)

Knowing that Faith was born Canadian makes me read this “north and south of the border” album cover with a bit more snark, probably unwarranted, but so it goes, for me. Allan Jones is curious to me because he performed for so so so long — more than 50 years, well into the 1980s, including a spot on the Love Boat. “I Fall in Love with You Ev’ry Day” was written by Sammy Stept, who also wrote “Don’t Sit Under Apple Tree.” So that’s a song I do know. Man, back when all it took to be romantic was to sit under an apple tree. Fritz Kreisler was “one of the most noted violin masters of his day, and regarded as one of the greatest violinists of all time, he was known for his sweet tone and expressive phrasing” (Wiki). Helen A. Futter doesn’t seem to be buying records for the quality of the violinist, though — what made this record appeal?

“Londonderry Air” is an arrangement of a folktune, and in this arrangement, was popular — but with lyrics added, as Danny Boy, it would become even more popular. That must be how this classical artist landed in this pops collection. Lindley Armstrong “Spike” Jones (December 14, 1911 – May 1, 1965)[1] was an American musician and bandleader specializing in spoof arrangements of popular songs and classical music. Ballads receiving the Jones treatment were punctuated with gunshots, whistles, cowbells, hiccups, burps and outlandish and comedic vocals.

His bio reads like the kind of story you’d need to pay a PR person to write:

His father was a Southern Pacific railroad agent. Young Lindley Jones was given the nickname ‘Spike’ by being so thin that he was compared to a railroad spike.

At the age of 11 he got his first set of drums. As a teenager he played in bands that he formed himself; Jones’ first band was called Spike Jones and his Five Tacks.

A railroad restaurant chef taught him how to use pots and pans, forks, knives and spoons as musical instruments.

He found other like-minded musicians and they began playing parodies of standard songs for their own entertainment. The musicians wanted their wives to share their enjoyment, so they recorded their weekly performances. One of the recordings made its way into the hands of an RCA Victor executive.

Still, bless him, his stylings shaped my musical childhood. Eddie Cantor. Has to be a stage name. Like naming me “David Writer” or something like that? (Googles: “born Isidore Itzkowitz.”)

Cantor may have been the first artist to have been censored on television. For singing live, on TV, the same song that Ricky Ricardo would sing to Lucy.

Other than his musical credits, Cantor “helped to develop March of Dimes (and is credited with coining its name).” Sammy Kaye. Not much there, but the song has a story. From Wiki:

According to Drake, “I’m a Big Girl Now” was written at the request of Kaye, who had recently recruited Barclay to sing with his band and desired a “special” song for her to perform at an upcoming event. Its lyrics are addressed to the singer’s boyfriend, informing him that she wishes to not be treated as a child.

Even Wiki, though, called this a novelty song. The last binders (here and here) were filled with Bing Crosby, which has a very different vibe than these bubblegum songs. The next record is by Carmen Cavallaro, who reminds me that the pop music of the first half of the twentieth century was blended with the classical music of the time: “Cavallaro’s single best-selling recording was his pop version of “Chopin’s ‘Polonaise,'” Op. 53.” (Wiki).

The last bit here is just Helen’s name, possibly in her own hand.

Did you know Helen? I have one more set of records to go through before this series is over, and I would welcome memories of her to feed into my attempts to understand and to feel her through the records she owned. https://www.youtube.com/watch?v=ZOFxaxsW23k Artist Emily Koch paints portraits focused on the surreal and abnormal. In its series The Slice, WDSE-TV presents short...