A Brief Remembrance of George Hovland 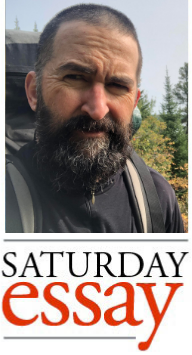 I’ve only been in Duluth for 20 years, so in relation to George Hovland’s life, I’m just a newcomer. Even so, as a cross-country skier, my tracks crossed his over and over.

George always ran Snowflake Nordic Ski Center like a charity. The cashbox on the counter just sat there on the honor system. Each year, I signed up my kids for the KidSki program. This was during the window of time each fall where he gave a discount for signing up early. I paid full price because I could afford it. I also did it because, unlike a lot of things, I knew exactly where my money was going. I mean, outside of my family, cross-country skiing is my favorite thing. And each year when he got my check, George called me on the phone and said, “You shouldn’t pay full price. You can pay the discounted price.” And I said, “I know George. It’s me. I told you the exact same thing last year.”

One time, I was skiing classic style in the snow-blessed microclimate at Snowflake and George came up on me the opposite direction and said, “Great technique!” I was a little too pleased, but a comment like that from George, a 1952 Olympian, was like a benediction.

Another time, my wife Shelley told me that George saw Grace skiing and said, “Exquisite technique.” Exquisite. I guess my daughter outdid me, as I should hope she would. That’s the point isn’t it?

In this past weird pandemic winter, my first time on skis was November 16, 2020 at Snowflake. I pulled into the parking lot and climbed out of my car at the exact same time as George. We both commented that it was so great to be skiing. What a nice day, we said. After two decades, I’ve met George on the trail dozens of times. I know he didn’t know my name. After a while, I realized, it just doesn’t matter. We’re two people out skiing. It’s perfect. Names don’t matter. It’s almost Zen-like in the way that we’re completely absorbed in the present in the outdoors. My ski season started this year at the same exact moment as George entered the trailhead during his last winter. I feel blessed and lucky to have shared the trail—the trail he built—that day. And all the days before. And all the days to come. George pointed out my daughter playing in a snow pile at KidSki in January 2010.

One time, in 2010, I was lounging around at the counter inside the chalet at Snowflake during KidSki, waiting for my kids to finish up. I was coaching KidSki at the time, but after the masses left, my children still wanted to play around on the sledding hill behind the chalet.

George saw me standing there and said, “Hey! Come here and look at this.” He didn’t know me from Adam, I was just some guy who was standing there.

I walked behind the counter and through the racks of rental skis and he pointed out the window and said, “Look at that kid playing in the snow.” He had a big smile on his face when he said, “Isn’t that great?”

Even I could recognize the purity of that moment in real time, and I took a picture of Grace in the snow through the window by all those piles of ski boots and rental skis.

Just yesterday, I took another picture at Snowflake. Bonnie and Dave and Patti and Mark and Nona all recognized the East ski teams for their efforts last winter. All of us parents, sprawled out on the sledding hill by the Snowflake chalet, finally able to watch our kids get some closure for this past winter. The torch of skiing, passed on from generation to generation. I squinted into the setting sun, just over the roof of the chalet as we clapped for our kids. My daughter stood just feet from where George saw her years ago. We all said it was weird to be there without snow. The spring sun was warm and it felt like George was smiling down on all of us. To me, anyway. Bonnie and the team at Snowflake, May 12, 2021. The sun beaming over the chalet.

George Hovland of Duluth passed away this week at the age of 94. He was an Olympian, competing for the United States in cross-country skiing during the 1952 Winter Olympics in Oslo, Norway. He was instrumental in the creation of ski trails at Spirit Mountain and the Snowflake Nordic Center. His accomplishments and impacts on the local skiing community are too numerous to mention. His influence via Snowflake and the KidSki program will echo through the generations in Duluth. He will be missed.

Eric Chandler has been cross-country skiing for 50 of his 53 years. He is a member of the Duluth Cross Country Ski Club.

A Downtown Duluth brewery and taproom is moving into a larger, newly renovated space just an axe-toss away from its...