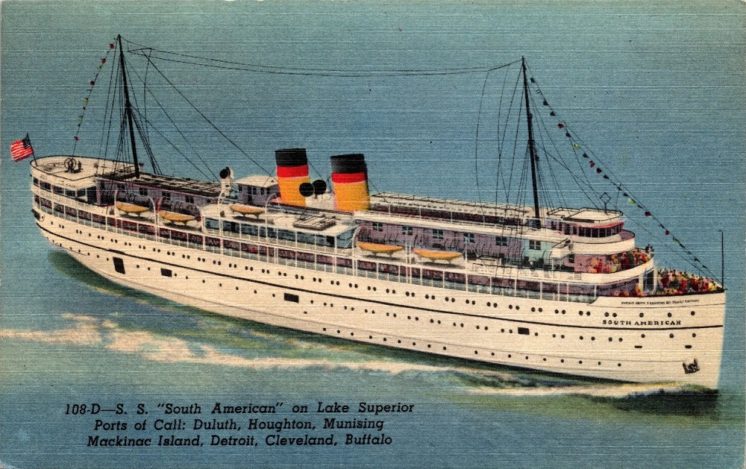 This undated postcard, published by Zenith Interstate News Company, shows the Steamer South American on Lake Superior. It was built for the Chicago, Duluth & Georgian Bay Transit Company and launched as an overnight passenger ship on Feb. 21, 1914. A fire in 1924 required the upper works of the vessel to be rebuilt, resulting in the addition of a second smokestack, which is shown on the postcard.

More on the South American and the history of Great Lakes passenger cruises can be read on the website Thumbwind, which notes the sister ships South and North American carried passengers between Chicago, Mackinac Island, Sault Ste. Marie, Michigan, Duluth, Georgian Bay, Detroit, Cleveland and Buffalo.

“These were the heydays of the industry,” author Mike Hardy writes. “A businessman could board a ship in Chicago for an overnight trip to northern Michigan. Spend the weekend with the family in the cool northern cabin in the woods and take the ship back to the city on Sunday night for work on Monday. It was noted that Hemingway’s father did just that early in the 1900s. It was a common occurrence for the 1800s ship-traveling public.”

In 1967 the South American was reassigned to making trips to the World’s Fair in Montreal and retired from passenger service at the end of the season. It was eventually moved to Camden, N.J. and rotted away there until it was scrapped in 1992 in Baltimore.

The S. S. “South American,” Sister Queen of the Great Lakes, visits famous historic and scenic ports from Buffalo, N.Y. at the lower end of Lake Erie to Duluth, Minnesota, the iron ore and grain shipping center at the head of Lake Superior.