Postcard from Glenn Rock in Duluth Remember when all of Duluth’s houses were pink? It was back when we all lived in the land of make-believe known as the illustrated postcard era.

As explained in the Zenith City Press article “Little Italy aka the Glenn,” and also in the Perfect Duluth Day post “Duluth’s Point of Rocks,” the area of Duluth around 12th Avenue West was once an Italian American community known as “The Glenn.”

Presumably the name stems from the word “glen,” meaning a valley bounded by steep slopes. And it must be the reason why the structures built in that area during the 1970s were named Glen Place Apartments.

Below are two photos from the Zenith City Press archives of the houses that made up the Little Italy neighborhood at Point of Rocks known as “The Glenn,” circa 1887. 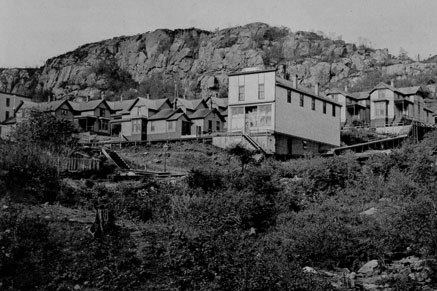 During Dance Attic's Virtual Homegrown show, festival founder Scott "Starfire" Lunt wandered into the yard to sing along on a...