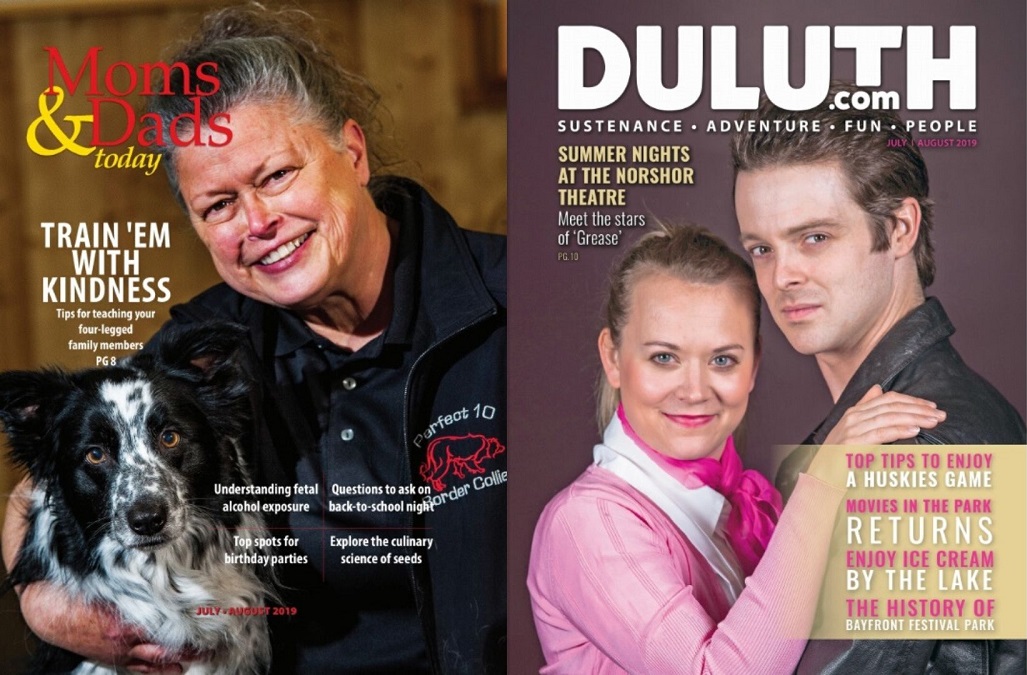 A pair of Duluth publications reached the end of their roads earlier this year. Moms & Dads Today and Duluth.com magazines have been absent from shelves since the July/August issues.

The bimonthly publications are owned by the Duluth News Tribune’s parent company, Forum Communications of Fargo, N.D., and were overseen by DNT Publisher Neal Ronquist and Executive Editor Rick Lubbers.

Lubbers directed request for comment about the magazines to Ronquist, who did not respond. Beverly Godfrey, features editor for both magazines, also referred questions to the executives and replied by email that she is “not involved in any of those publications anymore.” Godfrey remains at the DNT as a features editor.

A July 9 email from Godfrey to contributors of the magazines stated clearly, however: “Moms & Dads Today and Duluth.com magazine have ceased publication.”

The Woman Today, a third magazine published by the Duluth News Tribune, remains in operation, having recently published a November/December issue.

Former Duluth News Tribune Editor Larry Fortner led the way for Duluth lifestyle magazines at the turn of the millennium when he expanded his Senior Reporter magazine into NorthLife & the Senior Reporter. In 2000 the NorthLife component became Your Life in the North Country, published by AdMax, the Duluth marketing firm that continues to produce Duluthian magazine for the Duluth Area Chamber of Commerce. YourLife ceased publishing in 2001.

In 2004 the formerly weekly newspaper Ripsaw switched to publishing a monthly lifestyle magazine. It lasted for 10 issues.

The Duluth News Tribune got into the glossy magazine business in 2006 with the bimonthly Living North lifestyle magazine, launched under then-DNT Publisher Marti Buscaglia.

Looking to fill the lifestyle magazine void, Patrick and Glenda Sherman of Page Me Publications, longtime publishers of the Woman Today magazine, launched Duluth Superior Living with a September/October 2014 issue. Two years prior they had already expanded their magazine line by launching Moms & Dads Today.

Throughout 2015 and into 2016, Duluth Superior Living and Moms & Dads Today were published as a single magazine with each cover on a different side, converging in the middle where readers would find a spread with one page rightside up and the opposite page upside down.

All three Page Me Publications products were sold to Forum at the end of 2015, launching the Duluth News Tribune’s return to publishing magazines.

Duluth.com debuted as a Duluth lifestyle magazine in May 2016 aiming to be a “source of information about what it means to live, work and play in this great community.” The magazine replaced the terminated Duluth-Superior Living.

According to a 2016 DNT article on the publication, Forum decided to kill off the Duluth Superior Living brand in favor of Duluth.com because the former struggled to find footing as a general audience publication.

Duluth.com magazine lasted for 20 issues, which contained features written for the magazine mixed with adapted stories from the Duluth News Tribune. Coverage ranged from food and shopping to local events and music.

Jay Ott, president of AdMax, says the struggle for lifestyle publications in Duluth has always been an inability to convert audience into sustainable revenue.

With the print edition of Duluth.com falling to the wayside, the question arises of what will happen with the accompanying Duluth.com website. It appears to still be in operation, although without the featured stories from the magazine itself. Instead content has moved to featuring recipes from the Zeitgeist Arts Cafe and a video about a weight-loss challenge.

Ott believes the downfall of Moms & Dads Today can be traced back to its struggle to establish a specific audience base, unique from other DNT publications, specifically the Woman Today.

Duluth.com and Moms & Dads Today join Zenith News and the Transistor as Duluth media products to cease operation in 2019.

The longest running and most established of the three publications acquired by the Duluth News Tribune in 2015, the Woman Today, appears like it will continue operating, although without Godfrey as editor. It debuted as the Area Woman in 1996 and readers still often refer to it by that name.

I was lucky enough to run into Michael Fedo at Zenith Bookstore at the rescheduled Small Business Saturday on Dec....