John Ramos ramps up his edgy journalism with Duluth Monitor 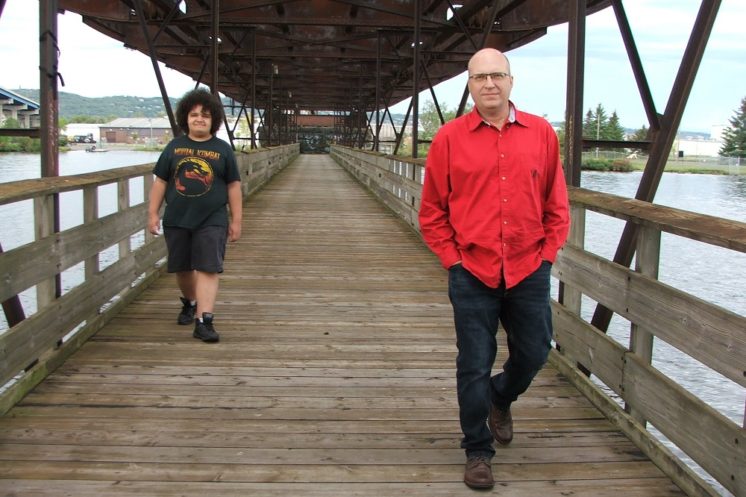 John Ramos strolls with his son, Walter, on the fishing dock that was once part of the Duluth/Superior Interstate Bridge. (Submitted photo)

A longtime Duluth journalist known for his combative style and sharp wit has created a new outlet for his work. John Ramos launched the Duluth Monitor website in June.

“I am notorious in the town for being controversial,” Ramos said. “It is nice to just have my own outlet for that.”

Though he digs into serious matters with attention to detail in his articles, Ramos is not afraid to tell readers what he thinks, at times offering flippant headlines like, “City greenspace almost filled with mountain bike trails,” and “Zoo Director Simonson hires lobbyist to lobby Senator Simonson.”

Ramos said he started the website to have more creative license and control over his writing, and because he noticed he was finding stories before other news outlets “without even trying.” While attending the meetings of various boards and commissions, Ramos said he often found he was the only reporter in the room.

“I was going to meetings that they weren’t going to,” Ramos said. “If there’s all these meetings that nobody goes to, that’s almost like an untapped resource for a journalist.” 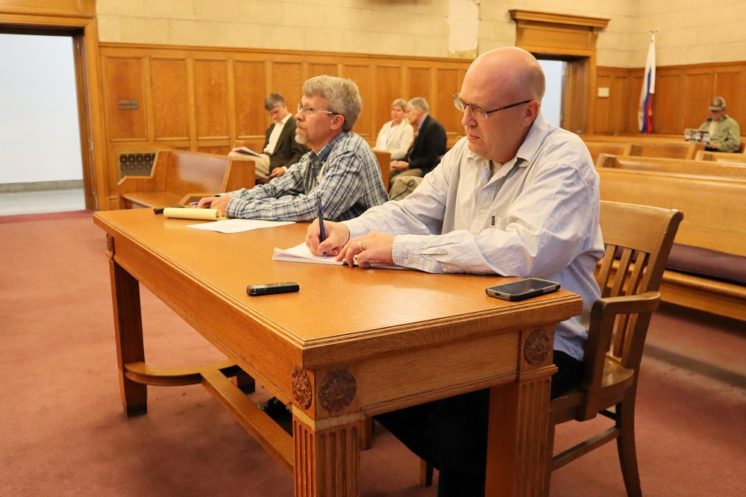 Beating Up the Competition

One week after launching the Duluth Monitor, Ramos made waves by reporting that $10 million of the money raised by a new 0.5 percent general citywide sales tax to pay for residential streets in Duluth was earmarked to be spent on streets in the city’s medical district. He learned about the distribution of funds by looking up information about the budget after a city council meeting because there were numbers mentioned that seemed vague.

Two weeks later the council approved a list of streets and bridges to receive funding, but some councilors noted they felt the administration had not properly communicated with the council and the public about the medical district funding.

The Duluth News Tribune published an editorial after the vote with the headline, “More transparency needed with Duluth’s street improvement program, tax.” Though the paper’s opinion piece seemed to vindicate Ramos’ reporting, it did not mention where the news originated, prompting Ramos to lash out in a piece titled “News Tribune struggles to keep up.”

Ramos said he believes the News Tribune “refuses” to mention his name because he has been “beating them up for years.”

What the Journos Think

“What John is doing is one of those forms of asking questions and pushing to get answers beyond talking points, and public officials should treat his platform with some type of respect, even if it’s not the traditional platform of a newspaper, television or radio,” Hanger said.

“It was John who broke the story about a portion of the half-percent sales tax revenue being dedicated to streets in the new medical district,” Hanger continued. “While some of his information was argued to be inaccurate, the overall issue was not. And it was then reported on by other media outlets.”

Hanger said Ramos has made the Monitor stand out by going “beyond sound bites, prepared statements at press conferences and constant ribbon cuttings.” While Ramos “has an opinion-spin to his product at times,” and might “take bigger risks with his headlines and statements,” Hanger said Ramos’ intentions seem to be to “keep officials truthful and accountable to the public.”

“It can bring better transparency and accountability of our elected leaders, and therefore, it’s a win for the public,” he said, adding that earlier in the day he spoke at the Cloquet Kiwanis Club on “journalism in this day and age, and how important it is that we have unhindered media in order to remain educated and informed citizens.”

Dr. Jennifer Moore, an associate professor at the University of Minnesota Duluth with a focus in journalism, visual communication and media history, said she thinks readers need to be the judge.

“We have many engaged citizens in our community who I trust to judge whether or not the Duluth Monitor is a credible news source,” she said. “I’d encourage everyone to read it with a critical eye. Ask if (the) reporting is seeking multiple voices to tell a full story.”

The bulk of Ramos’ work before the Duluth Monitor appeared in the Duluth Reader and the Cheerleader.

Reporting from the Fringes

Ramos earned a Bachelor of Science degree in ecology and management at the University of Michigan, but got into journalism because he felt he “had a talent for it.” His first writing experience in Duluth came in 1998 with the Duluth Reader, then called Northland Reader.

Between 2001 and 2006, he released six issues of his ’zine, the Cheerleader, which included what he referred to as “long involved pieces on various political issues,” such as the use of tourism tax for the building of the Great Lakes Aquarium. He also published historical articles, essays about taxi driving and works by a handful of other writers. Print copies of the ’zine can be found in the Duluth Public Library’s non-circulating section.

From November 2007 to May 2010, Ramos authored “John’s Advice Column” in every-other issue of Duluth’s weekly Transistor publication. The articles featured short pointers like: “Pay for old projects before starting new ones,” and “Make a nuisance of yourself when necessary.”

Over the past nine years, Ramos has also written pieces published on Perfect Duluth Day. Of that work he is perhaps best known for his “TDOB Index,” spanning 2011 to 2012. At the time, Duluth Police had seized property from Jim Carlson, owner of a Duluth head shop called the Last Place on Earth. Carlson was being investigated for selling synthetic drugs. Ramos’ “Total Days of Bullshit Index” consisted of daily observations about how Carlson had not been charged with a crime, though police continued to hold on to his property. After 454 days, charges were filed. Carlson was later convicted and remains in prison.

Ramos returned to the Duluth Reader in 2014, when he was offered a regular political column called “City Beat.”

In 2018 he raised $3,702 on the Go Fund Me website to pay himself for a year’s work on “City Beat.” When that line of funding ended he left the Reader to launch the Monitor.

Striving for a new name that was “classic for a paper” rather than “edgy or creative,” Ramos brainstormed ideas with his wife Camila and decided on Duluth Monitor which he said is “classic but not common.” The name encapsulates the digital format (being on a computer monitor), a touch of Duluth culture (monitor also being the name of a low-lying gunship that protects harbors) and Ramos’ commitment to observing community members in leadership roles (monitoring by “keeping an eye on things to make sure they’re behaving”).

Ramos said “free information and open transparency” are important to him as both a journalist and activist, which is one of his goals for the Monitor. He sees the lack of transparency in the political system and media outlets as an issue and is willing to sacrifice his relationship to organizations in order to stay true to his ideals and voice.

In contrast, he said reporters at the Duluth News Tribune don’t want to “jeopardize their relationship with the mayor’s office. They love having connections or contact rate. They call it ‘access.’” Ramos, however, is not worried about access.

“I don’t care about that at all,” he said. “If I don’t meet the mayor, I don’t care. There’s so much to learn by digging through contracts.” By gathering information through meetings and public records rather than taking leaders’ word as fact, Ramos said he’s able to report information that other media outlets might miss.

“Everyone is so comfortable in this town,” he said. “Everyone has their spot: there’s city council, there’s the media, and the mayor up there. And everyone has their little dance that they do. The mayor will do face-to-face with the media … the media will show up at certain meetings and ask ‘these questions’.”

Ramos describes how that dynamic makes it possible to “sneak something through” because the current structures in place are “so predictable, and everybody’s so comfortable and nobody’s asking questions.”

By being willing to do this digging, he said, he’ll never be short on resources for stories.

“I totally jeopardize my access every day just by treating people hard, aggressively,” he said. “And if they don’t want to talk to me, that’s fine. I’ll still write about them. Because they have all these meetings and they have to show up for them. So I don’t worry about access at all.”

With a focus on tourism taxes and finances, Ramos has found that other media outlets are “always for gigantic projects and they never ask hard questions.” By approaching journalism “with a hard baseline skepticism that is lacking in other Duluth media,” Ramos said he questions “official narratives, while other media embrace them.” This has led him to find that “a lot of the time the project was built on nothing but dreams and promises.”

Ramos wrote in 2015 that his reporting on a plan to tear down and build a new public library in Downtown Duluth was “a triumph of transparency” that effectively stopped it from moving forward.

“The Duluth News Tribune praised the consultant’s report that led to this conclusion,” Ramos said of the plan to replace the library. “In an editorial, they actually advised their readers to ‘trust the experts’ and move forward with planning.”

When Ramos reviewed internal City Hall emails, he found that “the mayor and the consultants had been working together behind the scenes to craft a report that specifically led to the mayor’s preferred conclusion.” In doing so, “the ‘experts’ were compromised from the instant they were hired. Claiming to be ‘objective,’ they were actually pushing a predetermined City Hall plan.”

“Exposure of that situation is the reason the library was not torn down,” Ramos said. “All such planning halted after my stories appeared.” 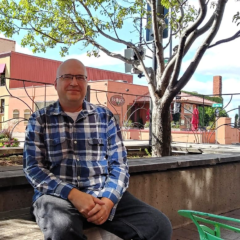 Ramos said he has recorded audio from more than 1,000 meetings pertaining to Duluth local politics and community organizations. The sessions he attends include meetings run by the Duluth City Council, Planning Commision, Parks Commision, Urban Forest Commision, St. Louis County Board of Commissioners, and the boards of directors of the Duluth Public Library and Spirit Mountain. Keeping track of history this way allows him to “go back years to pinpoint where an issue started,” which he said nobody else has.

Ramos is the only Duluth Monitor staff member, though his son Walter contributes some of the drawings that accompany articles.

“As my income grows, the first thing I’ll do is hire another reporter,” Ramos said.

“Donations are very important to the Duluth Monitor. A contribution of a dollar or two a month is cheaper than people pay for the DNT right now,” he said.

When asked about how he saw his news website fitting in with other Duluth news outlets, Ramos replied, “Fitting in!? I see it as leading them! Leading them all and they can all just follow along as they wish.” Because of the information Ramos is gathering at meetings and through research, he said “the TV stations are no competition to me at all” and that “the News Tribune is stepping up their game, but I’m still beating them left and right” and that the Duluth Monitor is “in it to be the number one.”