From muckraking journalism to neighborhood fluff, sports and hobby content to political and spiritual propaganda, Duluth has seen its share of short-lived, themed newspapers and magazines. Previous posts on Perfect Duluth Day have delved into music ’zines and literary/arts ’zines; this post features the less (or bizarrely more) artsy publications.

This post also omits numerous dead publications that were a bit more mainstream, such as Skyworld, Twin Ports People, Ripsaw, Zenith City Arts, etc. The focus here is on the more oddball periodicals. Published circa 2007-2011 out of Two Harbors by Matthew Untereker, Tidbits of the Twin Ports & North Shore appears to have been some kind of franchise publication in which local advertisers pay for spots next to syndicated crossword puzzles and whatnot. The flag of the paper notes it was “published and distributed weekly by Urban Graffiti Publishing” and boasts “over 4 million readers weekly nationwide,” but the Two Harbors edition clearly wasn’t distributed by the millions and, according to dates on the covers, seems to have been published every other week initially and later monthly. Community Spirit was founded in 2010 as a monthly publication of a Lincoln Park neighborhood organization called Volunteers Caring and Patrolling. The September 2010 issue was six pages long with articles about the neighborhood’s junior-league football team, handicap accessibility, a mother/daughter harp duo from Phoenix coming to Duluth, and how to win tickets to a show promoted by an advertiser. 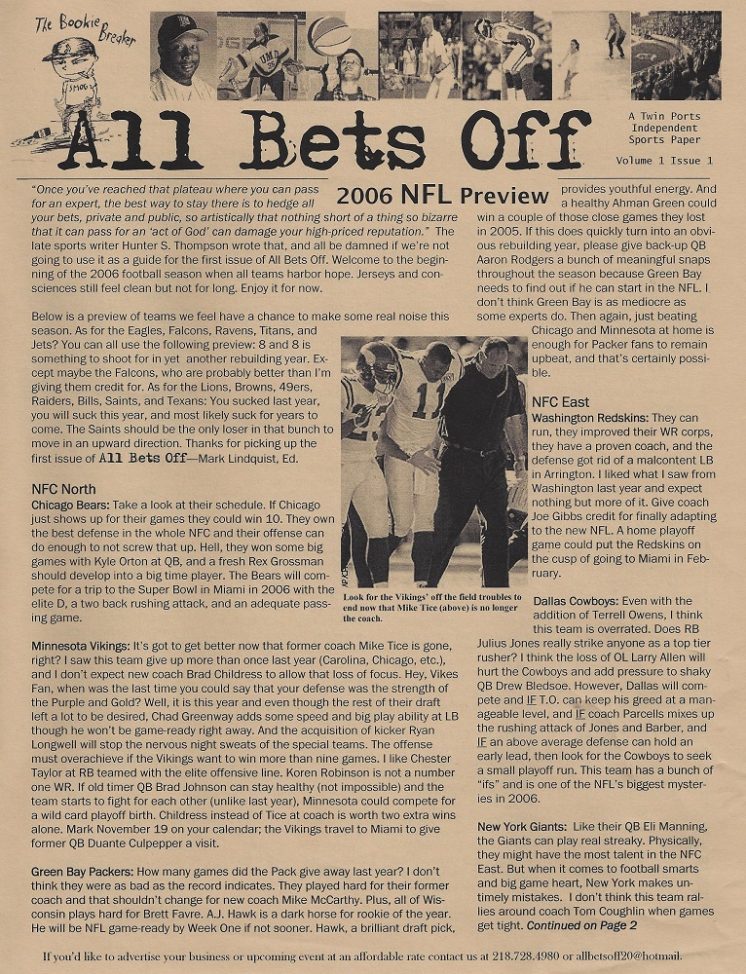 Mark Lindquist published two issues of All Bets Off in late-summer 2006. The four-page publication focused on sports and sports betting, and included a recipe column called “The Delicious Cliché” with cooking ideas for people who are “going to sit home all day Saturday and Sunday watching football.” Easily the most impressive Duluth news ’zine was John Ramos’s sporadically published six issues of The Cheerleader, which spanned 2001 to 2006. It started off as a free publication and by the end had a $7 cover price. The final issue was more of a booklet than a magazine at 72 pages, and featured 22 pages of observations about the then-struggling Great Lakes Aquarium. Just one issue of Goddess! graces the PDD archive — November 2005. It was published by Mary J. Chairs as a “free monthly publication for women of all ages and all stages.” The content was vaguely local at times, but the majority of it was stuff like “New video titles to grab kid’s attention,” “Embrace your inner 8 year old,” recipes, advice for pampering pets, etc. The featured “Goddess! of the month” in November 2005 was former Browsers N’ETc. coffee shop owner Morgan Hutchinson. The Raging Spade was a satirical two-page publication circa 2004. It had no masthead, so it’s organizers and contributors are a mystery. Issue #2 features a story about Britney Spears purchasing Glensheen Mansion. 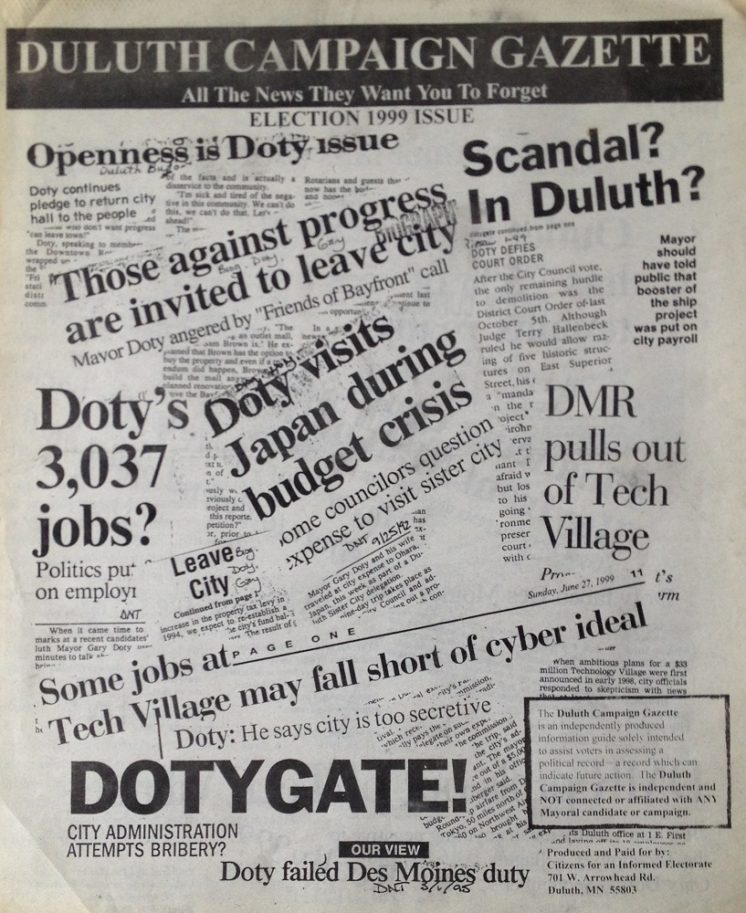 Duluth Campaign Gazette existed for one issue and for one reason. It was published in the fall of 1999 specifically to trash Duluth Mayor Gary Doty, who was seeking a third term in the upcoming election. The entire content of the four-page publication consisted of newspaper clippings in a collage, designed to highlight the most unflattering parts of the mayor’s record with headlines like “Affordable housing scarce” and “Duluth’s unemployment rises to 3.6 percent.” At the bottom of each page it is noted the paper was “produced and paid for by: Citizens for an Informed Electorate.” No names are attributed to the organization, but the street address listed was a property owned by Dr. Eric Ringsred, who was a candidate for city council that year. Mark Lindquist’s first ‘zine, The Shaky Ray, lasted about a dozen issues circa 1994-’95. Along with a group of college friends, Lindquist wrote about music while sprinkling in comedy and comic strips. Each issue was hand written and drawn with Sharpie markers, assembled with glue/scissors/staples and printed by sneaking into an office and using a machine to make roughly 50 copies. There were a few subscribers to the free publication, other copies were distributed at used bookstores around Duluth and Minneapolis.

What’s missing from this list? Shout it out in the comments or send an email to paul @ perfectduluthday.com. One particularly sought after publication is Crappé, published by Greg Conley in the 1990s. Got one of those?

“The Begat” from the musical Finian’s Rainbow

https://www.youtube.com/watch?v=pEUAuEn6Gp4 The 1947 Broadway musical Finian's Rainbow featured the song "The Begat," which included a reference to Duluth. It's at...